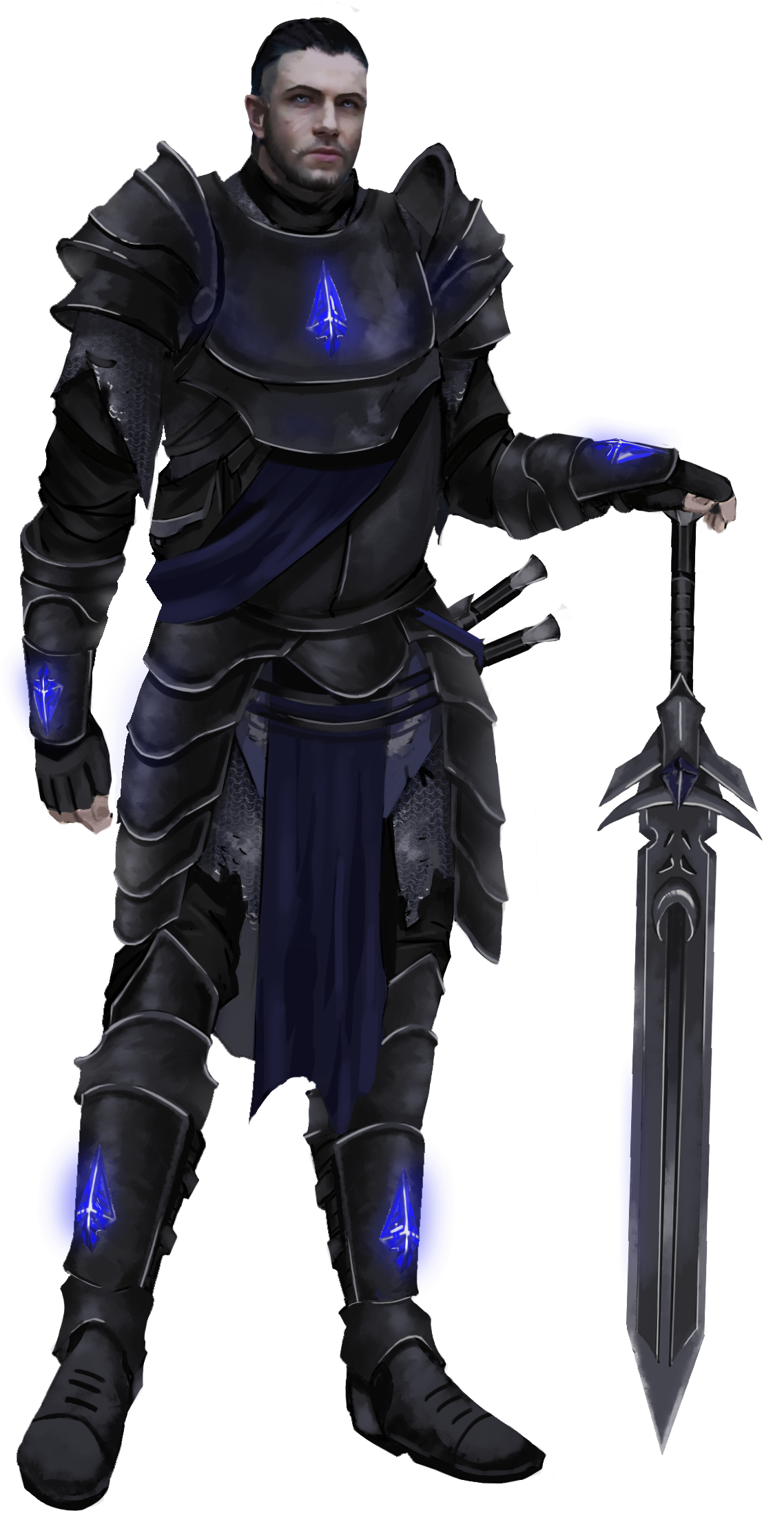 Arctus
"Bear"
Nightsong
You see a lot out here. Some would say too much. Me? Nah... It comes with the job. Just stay behind me, and you'll be alright.

A quiet and gentle soul, Arctus is a knight who dreams of peace and equality; he deeply wishes that someday, the Fallen and their Halgian cousins may find peace, and live alongside one another despite their beliefs. However, he is passionate about what he believes in, and has a great sense of loyalty - he would do anything for Alaric, his leader, short of murder. He has a high sense of honor, and cannot kill the young or innocent, no matter who or what may order him to do so. In protecting the weak and battling those truly evil, he is ferocious and merciless, earning him the nickname "Bear" by many of his comrades.

Arctus has a rather dry sense of humor and a strong vein of sarcasm to him; when off duty or among friends, he is quick to crack a joke, and enjoys lightening the mood. Away from friends, he serves as a silent observer and cunning strategist, sometimes serving as an informant or advisor to his higher ups. The bond with his dragon, the Heartwoodian Black Phantasm, is strong, and he likes to simply hang out and watch the world go by perched inbetween his dragon's great wings.

Though this Fallen has no great magical feats to boast of, he is rather proficient with greatswords and broadswords, heavy two-handed weaponry, his favorite being a large darksteel greatblade referred to as 'Ursa'. It is a large, black sword with stylized, reverse-wings and the roaring maw of a bear at its hilt, intricate lines coursing up the blade's center, stopping inches before the sharp tip.

Arctus does, however, have the ability to easily store and pull energy from all manner of gemstones, without the use of other magic or enchanting runes. Thus, he may do what many mages can, and store energy in gemstones to use later on, or in emergencies where he is too exhausted to fight anymore. 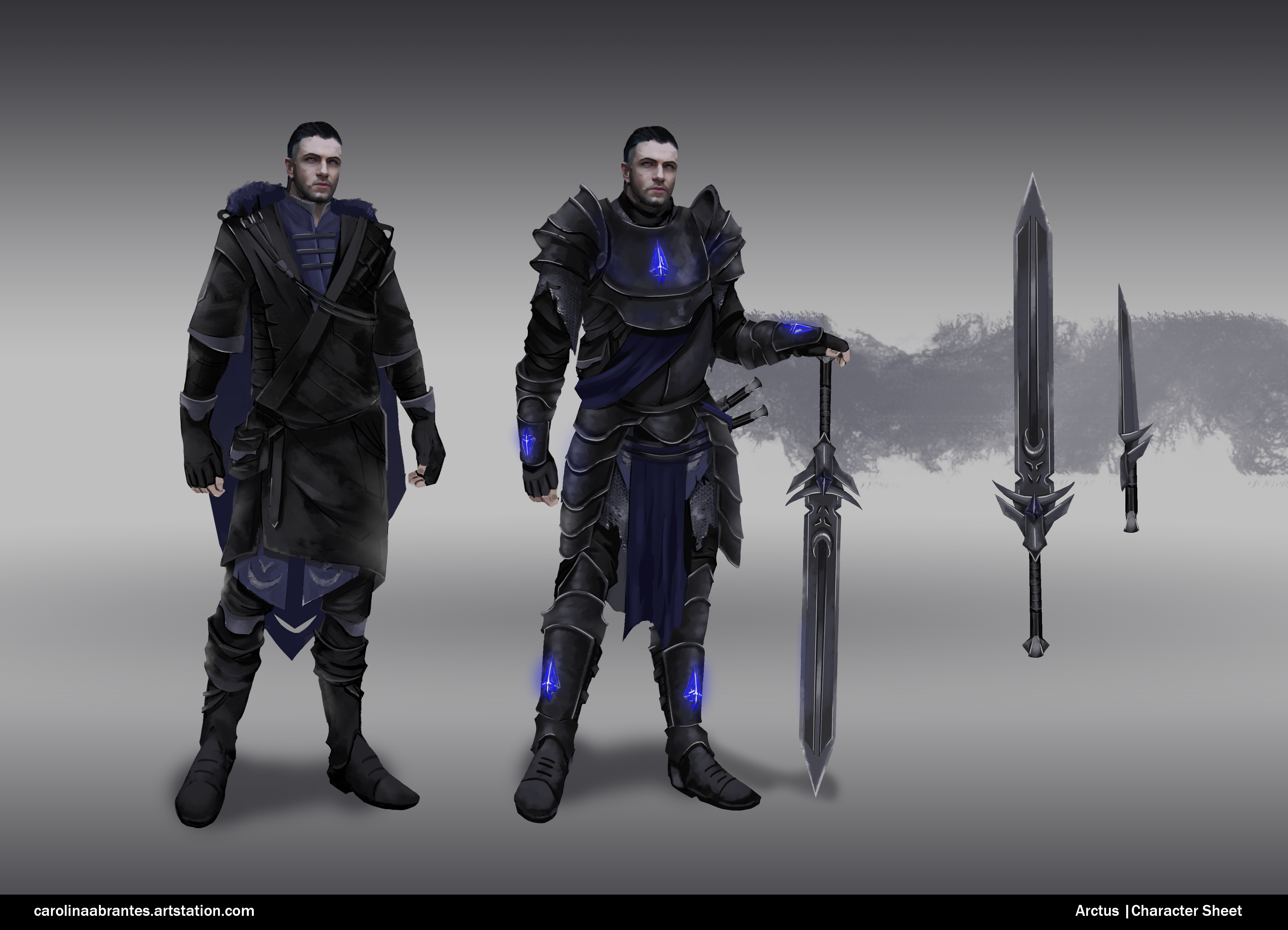 A tall, lean and muscular man, Arctus has the build of a knight long used to battle. He has black hair that has been cropped at the sides and slicked back, some inches long down his neck. His eyes are a pale blue, almost silver, and he has dark stubble in the beginnings of a beard that he sometimes neglects to shave.

Most often, he will wear a suit of full darksteel plate armor, with a deep blue gem in the breastplate, matching two smaller ones on each bracer and greave. These gemstones protect against the magestorms, and hold stored energy for emergency use. Sometimes, he may wear a more comfortable suit of dyed black leather and a black tunic, when not flying with Phantasm or out on a patrol.

A large broadsword, two daggers, and a pouch full of small, important items such as dried meat, stones enchanted for purification and healing, medicinal herbs and more can be found on his person no matter what he wears.

To Whom Credit Is Due