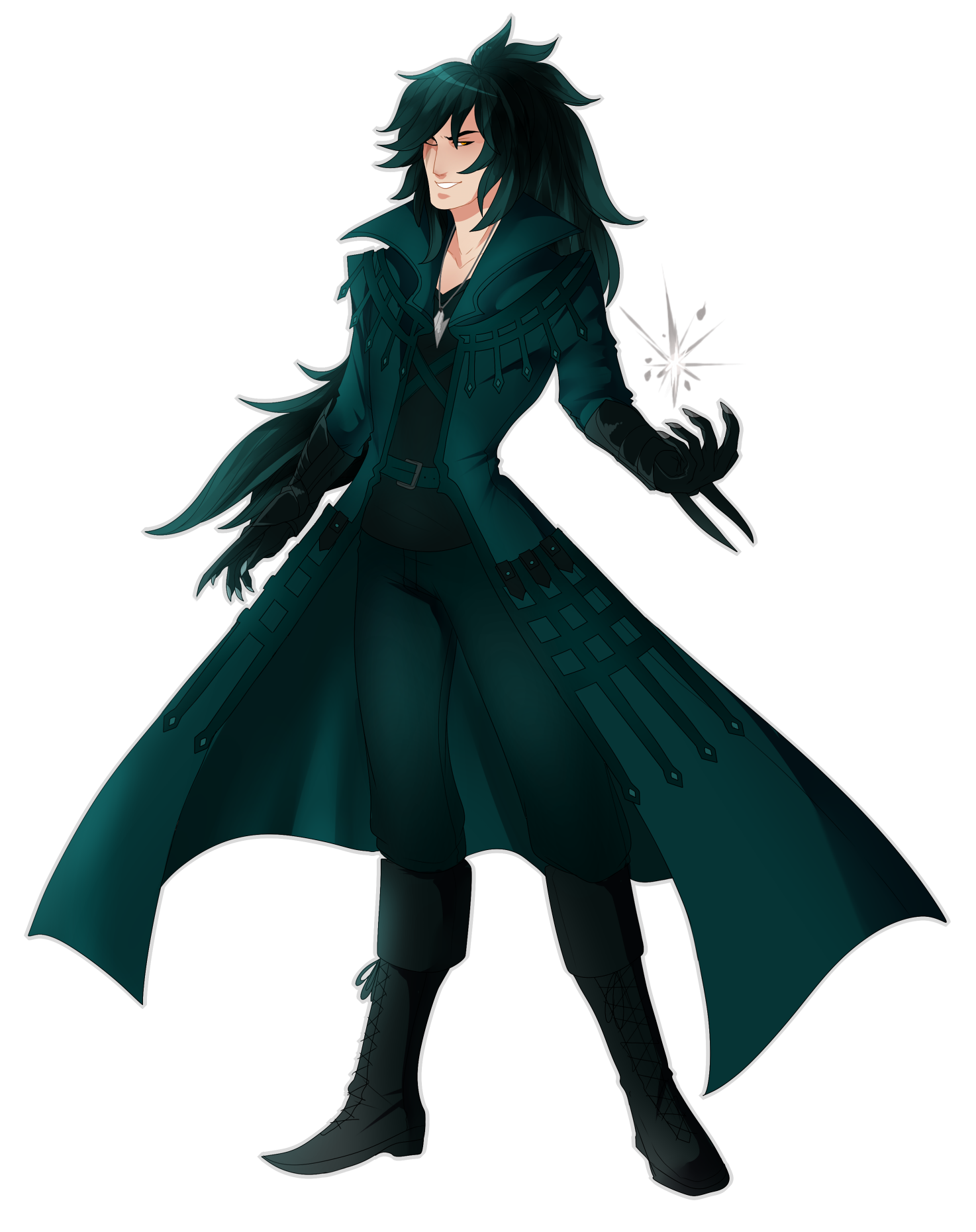 i am your armageddon

Forever I have fought and killed to secure my place in history's weave; though more often than not, I fought to simply stay alive. Now I have shown them all... now I am what I was born to be. No longer am I K'renth Ma'aek as my mother named me. No longer am I trod upon by those who think themselves above all others.

Now I am Armageddon; Megiddo, the Lord of that which many consider the final end. Here I rule over the depths of Hell, and embrace those souls too damned to see the Spirit Goddess in all of her beautiful glory.

Most often, Megiddo will appear in his humanoid form; a tall man with a noble bearing, long teal-streaked-black hair tied back into a loose ponytail. He has bright golden eyes with pupils slit like a cat's, and a long scar crosses over his right eye. His angular face and slanted eyes are faintly elven, though his ears are rounder, and he has slight claws on the tips of his slender fingers.

His wardrobe consists mostly of items that accent his hair or his eyes; he's fond of black armor and long, flowing cloaks, as well as dyed leather armor and decorative belts. Around his neck lay a small pendant with the shard of an old sword.

As a dragon, borrowing - and after the ascension, duplicating - Kacius' form, he appears as a scarred Silver with dark grey and black markings overlayed with teal and red. Two teal horns jut back from his triangular head towards his neck, smaller horns the same color lining his cheeks. Two long, forward-swept horns curve down and follow the line of his chin, much like a ram's. His wings are very large and wide, feathers growing along the arm and out over the leading edge of the dark red web. Smaller frills tip his elbows and hocks.

He wears two bangles on each forepaw and thick metal bands along his tail. Around his neck, Megiddo wears the same sword-shard pendant on a longer chain, often speculated to be of his own design. Each back paw is covered in thick, protective black leather gloves. In the form he was born as, something he likes to use for missions that require stealth, he appears as a gigantic canine covered in sharp, pointed scales. His legs are long and body lanky, with very long ears and a jagged, black-fanged muzzle.

His hind paws are like a regular wolf's, though his forepaws form draconic claws. At the end of his spiked tail is a scorpion barb filled with paralyzing venom. In various lightings, his colors can appear to be anywhere from a deep, greenish teal to a bright gold; the scales are highly iridescent, though not necessarily metallic.

His Tri'akun form appears much like his demon form, though with more tails, sharper and longer spikes and great hybrid wings. He grows much larger and his eyes glow a bright crimson; at the end of each long spike, as well as the tip of every tail-barb and his long ears burns a small orb of silvery reiatsu.

Arrogant, aloof and incredibly confident, Megiddo has a commanding presence, drawing attention easily whenever he wishes. He speaks formally most of the time, though has a dry sense of humor and a wicked sense of sarcasm. To those he trusts, he is a fair leader and a protective friend; if anyone - or anything - should threaten those under his protection, not much may save them from his wrath.

To enemies, he is ruthless, often considered evil due to the connotations brought on by his demonic heritage and his leadership of Hell. In truth, he sees as any means justify a true end; for the greater good, he would commit any sin. He is merciless to those against him, and gives little quarter in battle.

He will, however, show an odd streak of compassion once the fighting has ended. Though he would do anything to meet a goal, if he has wronged any in the attaining of that goal, he will often work to make amends.

Not much is known about what all Megiddo can do; his techniques vary, and he keeps many secrets. However, he is an incredible metal-mage rumored to be one of the best - able to pull metal even from trace amounts in living things, the air, or ore far beneath the earth. In addition to this, he's able to make near-perfect dopplegangers of himself that only appear as what they truly are (made from a metal doll wrapped with a strand of his hair) when killed.

He is able to summon his dragonform's wings and fly when in his human form; he may also shift into both the demon he was born as and the dragon he attained. 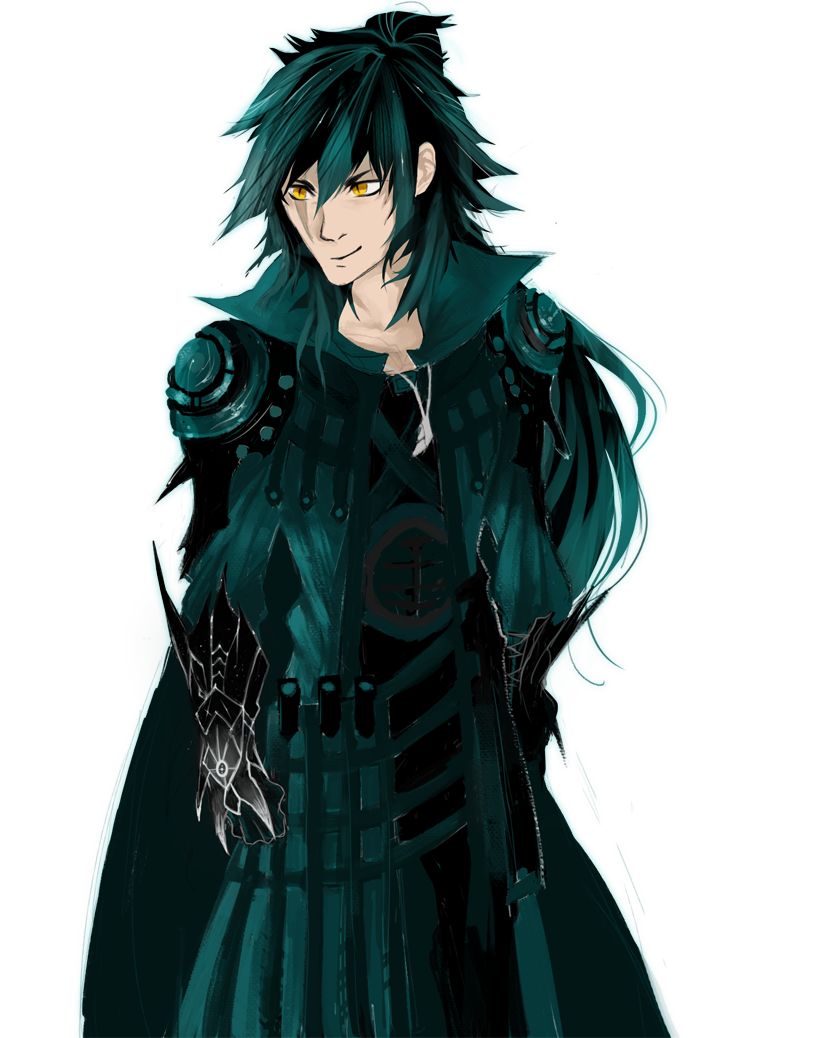 // I have finally achieved my goals.

At long last, I have achieved the status I wished for; I have risen above all the rest, and destroyed my mother's curse of forever falling behind. I am a Lethaos no longer! I have defied the laws of nature itself, and I am now a N'vaen! At last!

The price I paid was dear. I nearly lost my life. But my existence, as well as the existence of the Realms, is now assured. Hell's balance has been restored, and the Core is mine. I am one with Hell. I am Hell.

And forever I am now its guardian.


Coding by Savage for Blazeh
Edited heavily, of course, by the same C: