Former Vhela of the Myr pack in the Myrlands of Felnova, Ayunaye has learned how to hold herself in a position of leadership for many long years. Kind, compassionate and forgiving, she has a soft heart and a calm mind. She enjoys telling stories to her friends, cheering them with her musical laughter and cunning storyweaving.

Though physically quite weak, she is very skilled in magic, and uses it to heal any she sees injured, be it either friend or foe. Her compassion often gets the better of her, and she may risk all to save a life. Her relationship with her pack was once warm, and she still cares for all as if every member were of her own family. To strangers, she is gentle, yet wary, and was once very strong-willed. Since the death of her last mate, she has become rather fragile, and moments of her former leader's strength seem to be brief and fleeting. Her time in Kurai has very nearly broken her spirit.

When her friends or pack members are in danger, she lets anger shine through the cracks, and is capable of much more than her delicate appearance lets on. Rare is the time when Ayunaye is driven to panic; she is no war-leader, but has some grasp of strategy, and the safety of those around her come before everything. When pressed, she will fight to protect those she loves to the death, and isn't afraid of going too far to accomplish the task of saving lives. 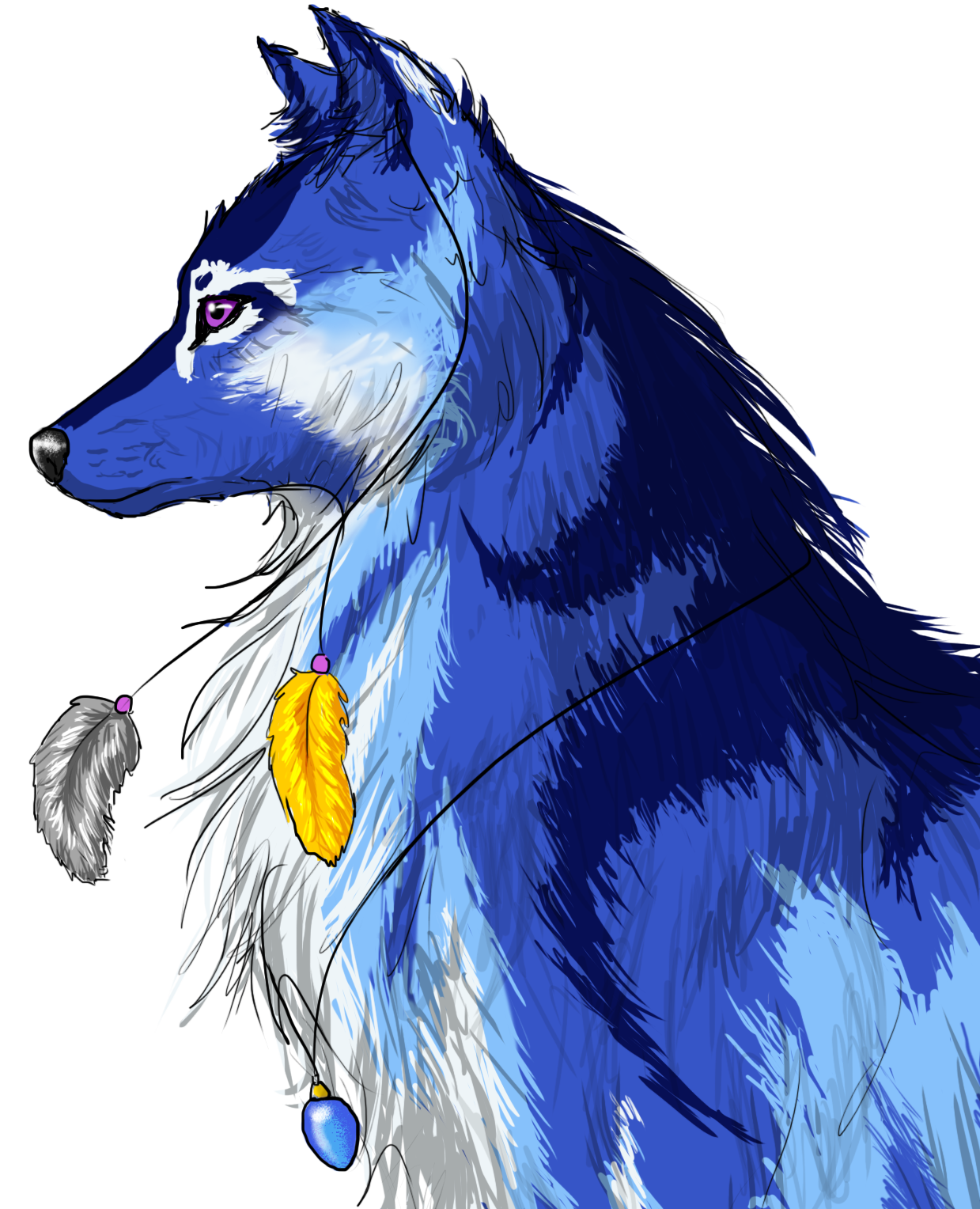 Of average size for a Vystrian, Ayunaye stands around two and a quarter feet at the shoulder. With a delicate build and thinly-boned frame, she is light and lithe on her paws, built for agility and speed.

Her fur is of varying blue shades, with darker hues trailing from her back, white on her belly and throat. Small white markings line her sides near the back, and the underside of her tail is white, as well as the toes of a single paw. Her eyes are a deep violet, ringed with white fur, and her cheeks are touched with dark blue. On each ear, there are white circles, slightly reminiscent of a tiger's.

She wears two bracelets, one silver and the other gold on one paw; on another, she wears a single band. Around her neck, the cord half hidden by her ruff, lay a pendant holding a glittering sapphire, rumored to be Cirrus' missing eye. From one ear she has two beaded strings; all of her jewelry she claims are gifts.

Since her time in Kurai, her abilities seem to render a physical change each time they are used, and she gains glowing markings in blues and purples across the darker portions of her pelt. Her eyes glow brightly as well, and the intensity of these markings is known to be tied to how much energy she is actively controlling at that time. However, when not in control of any magic, all of these bioluminescent markings fade away to nothing. * power of a goddess 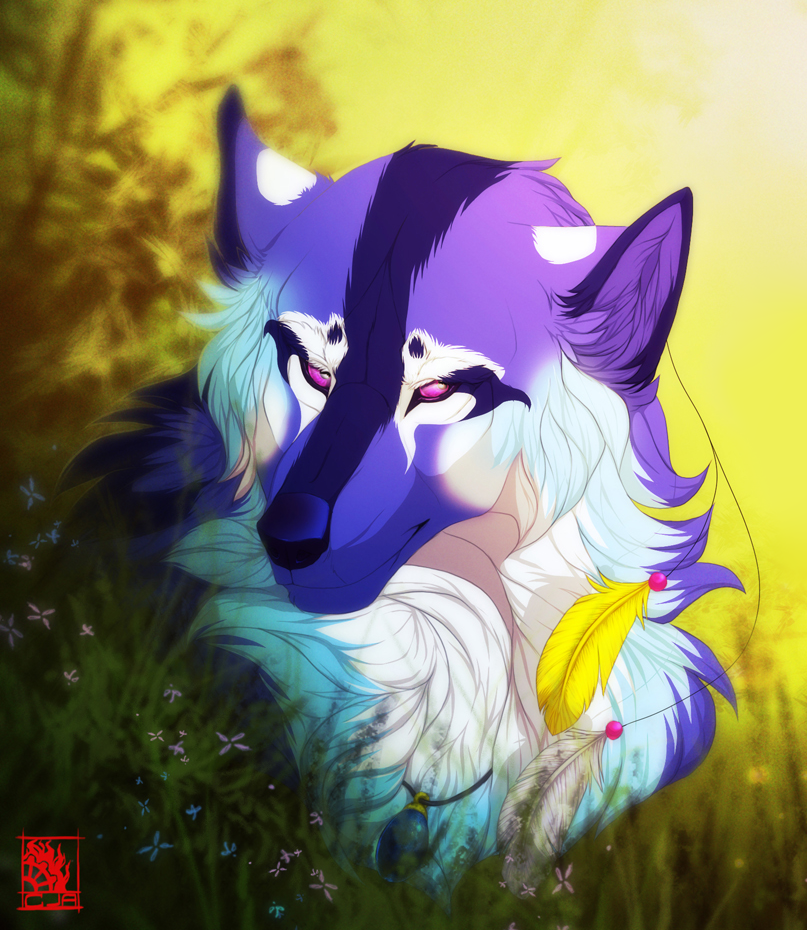 Being Cirrus' granddaughter, she inherited from him a small grasp of time; though it drains her to the point of collapse, she may create a bubble around her of timelessness, freezing those she wishes for a few fleeting moments. She initiates this power by fusing magic with sound, and is sometimes unable to control who is caught in the mix.

Skilled in light magic, she's able to heal fairly sufficiently, though she seems to be unable to heal her own injuries - the reason remains unknown. When Ayunaye taps into the light element, the white markings along either side glow, as well as those around her eyes. Minuscule orbs of light, like tiny white fireflies, float from these glowing spots and fly around her, disappearing once complete. Though not an offensive fighter, she may utilize light in focused blasts of energy, strengthened by the light of either full sun or full moon. Being in complete darkness weakens her, and if prolonged enough, she may become delirious and mentally unstable.

In dire need, she's able to release energy from Cirrus' pendant to use, refusing to do so in any other case.

The past is something she avoids talking of for many reasons. Of what has been revealed, little is known. It is listed thus:

* years pass. Skyywin succumbs to disease; Acatyl and Ayunaye lead jointly, having returned the summer earlier. her brother is killed just two months after in an accident while hunting. first appearance to the Myrs of the odius sin.

* Ayunaye leads the Myr pack into peace. choosing a new site for the den, they avoid Vehn aggression and sin detection. the pack prospers and grows.

* Kakrau of the Vehn finds them, and patrols clash frequently along a reinstated border. the Myrs take back what land they lost, and extend to the south. chance meeting of a Vehn named Rulos on one such skirmish.

* Rulos meets secretly with Ayunaye, and explains the Vehn's troubles; that the ice-ridden lands of the north were devoid of food. she notices his starved condition, and gives him food. pity rises for the Vehn, but because of their neighbor's aggression, she is unable to make peace. she lets go of the western border, and begins marking further east, leaving the mountains to them.

* Rulos leaves the Vehn for the Myrs, and becomes Ayunaye's mate. they have a single pup together that they name Arunos, proud of the young black ball of fluff that would someday lead the Myrs into glory. the pup looks almost exactly like his black-furred father, save for a single silver paw.

* tragedy strikes. while off to find water and away from their private den, leaving Rulos to protect the pup, both are attacked and killed in a chance encounter. she returns to find nothing but blood and death, and flees in horror. for weeks, she is nowhere to be found. Thunderfang, a kamine and her Firehn, takes leadership in her stead. he refuses the title of Vhalen, convinced she will return.

* she does return, at last, and retakes leadership from her loyal Firehn. emerging as a quieter leader with a stern paw, she repels Vehn attack and crushes patrols who enter her domain. more years of this pass, and the Myr wonder what's become of their compassionate leader. many begin to think whatever happened to her mate and pup broke her; shattered her heart.

* a loner named Antero joins the pack. his cougar drienar and Kohaku, her own, quickly become friends. they spend time together, and she is surprised to find she's falling in love once more. the shields around her begin to break, and she returns once more to her old ways.

* the Demon War strikes, and devastation meet her pack. Antero disappears - she's forced to lead them over the Darklights to the dragons' Realm, and all escape into Xaeri.

* Felnova is remade, and all return to their respective domains. though saddened by loss, Ayunaye throws away the shell and leads as if nothing happened. surrounded by those she cares for, she believes she needs nothing more to recover.

* meets and falls in love with a Death hellwolf named Araneo; chooses him as her Vhalen, and leads the Myr pack for some time alongside him. they have a litter of puppies, while the threat of the Summoning looms on the horizon.

* Araneo is assumed killed, and Ayunaye falls into a maddened depression, eventually disappearing from the pack and vanishing into obscurity. is spotted in Kurai, delirious and half-dead, taken prisoner by the War alpha, Viper, and his hellwolves. she is raped repeatedly, and is thrown into a hellwolf prison, where she waits to die.

Events afterwards have been recorded in role-play. Once old enough, more will be added to the list.

* credit that is due

coding and content (c) Blazeh (Verridith); pictures to Volinfer, Ace, TheShadowedGrim, Slug, Raven, Toxic, Graphite, Kirra and myself.
once, I
loved
you
all.

but now, do I even have the
strength to face any of you
again? I miss you so very
much. can you even try
to forgive me...?

* the name 'Ayunaye' was inspired by the name of a character from Final Fantasy X, Yuna; she shares the same nickname.

* the way she heals is unique, and was inspired by a good friend (Valefor, who also introduced me to Final Fantasy). we had been talking about the way our two alphas healed, and one we came up with is this: small orbs of light dancing around the paws (with Ayunaye, its firefly-like orbs that emanate from her markings) when the light magic is tapped. cool, huh?

* Ayunaye has gone through many design changes before this one, which I intend to keep. she was once black with silver markings splashed across her back and on her face, with one silver paw. then she was white with light pink and blue markings. now she's blue with white markings.