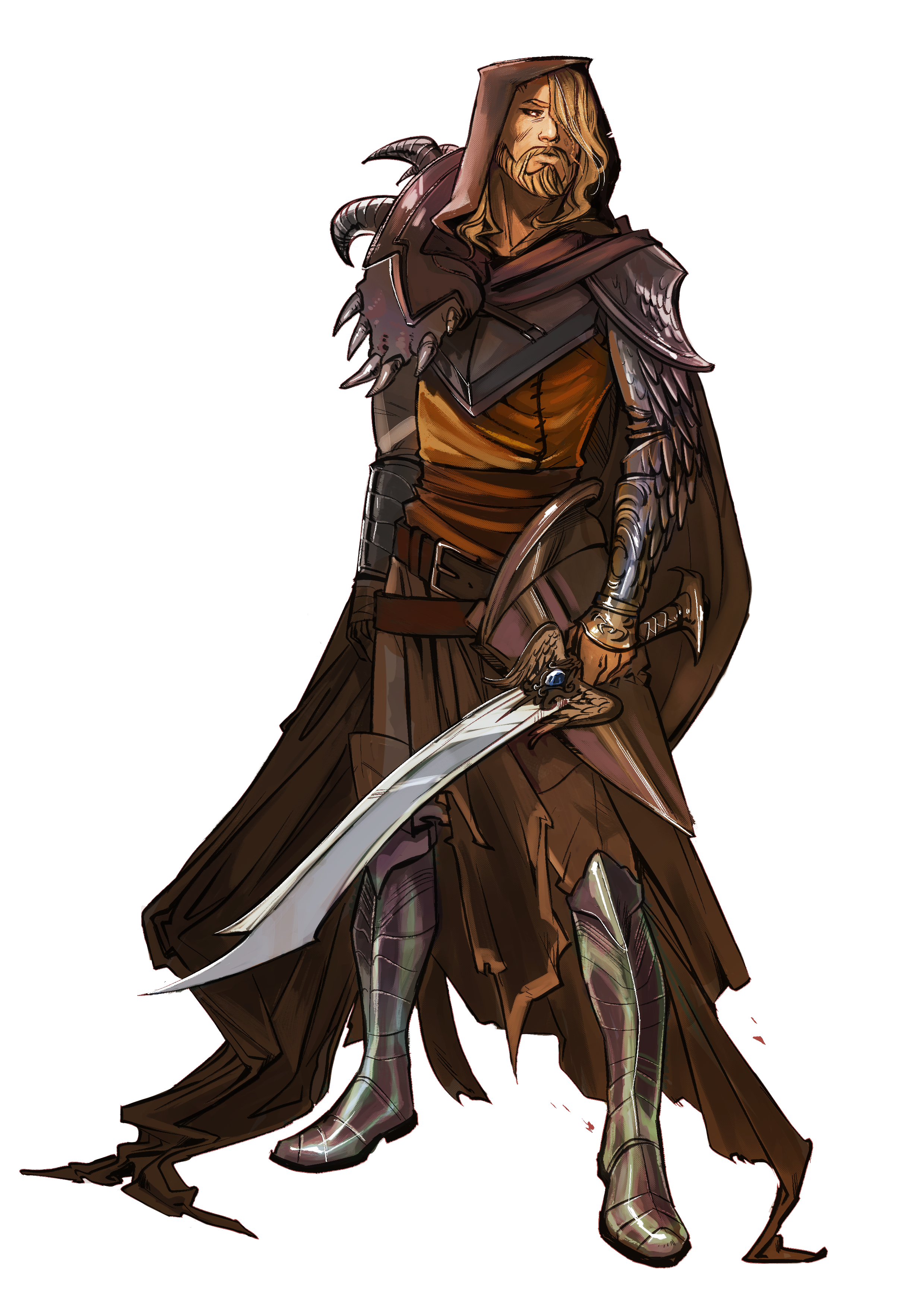 Bird is a tall swordsman with the build of a knight; broad-chested and strong, he often sports armor bearing the Mark of the Raven, a tribute to his past. On his right hand and arm, he wears three shoulderplates decorated with a ridge of metal feathers; his wrist is covered with a long, plated bracer carved with the design of a gryphon. A similar, though lighter, bracer covers the opposite wrist. He generally wears tunics that are colored browns and tans, though in times of importance, he'll wear gold lined in white. he wears a thick swordbelt that houses a worn broadsword marked with the Raven crest, inlaid with a topaz engraved with the kv'naer rune for strength. When traveling in bad weather, he wears traveling cloaks that range in color from tan to deep maroon.

His hair is just below shoulder-length, long and a deep blonde in color. His eyes are a deep brown-gold that shift in color to an amber in accordance with his emotions - since the Change, they can also be seen with cat-slitted eyes, though this is rare. On his right wrist can be found a small, tattered white ribbon. He also wears a gold ring set with a round topaz.

In his werewolf form, Bird grows to be a wolf the size of a large horse. His fur is a dark golden with a lighter underbelly and paws, the insides of his wings and beneath is tail. His feathers are banded in a darker brown that marks his back in a dorsal line, as well as the tips of his ears.

ť what is known

ť path of the wolf

the way one acts

A firm believer in honor and nobility, Bird upholds the oaths of the Knighthood that forsook him long ago. He fights for what he believes and doesn't hold back against those that threaten the ones he seeks to protect. He would fight to the death against any enemy, should it prove to save the lives of others.

Bird is a quick-thinking strategist and is able to come up with solutions to problems others cannot fathom. He analyzes a situation in battle as soon as there's a moment's pause, and jumps to direct those in harm's way away from injury, at any cost to himself. Once there's no chance of innocents falling to the swords of his enemies, he will dedicate himself to their defeat.

To those he knows, he is gentle and kind, very calm, with a steady mind and heart. Others are slow to gain his trust - though once his guard is down, and once that trust is won, he would do anything to protect them. He's exceptionally good with children, and enjoys their presence, entertaining them with stories of his youth.

life by the sword

Trained in the Courts of both Felnova and Millirand, Bird is an exceptional swordsman, and an adept archer. Though partial to a single, two-handed broadsword, he's been known to wield more than one, and has also mastered the use of two long knives.

In times of need, he is able to shift into a giant, winged werewolf. In this form, his strength is nearly tripled; he gains the use of claws and fangs; as well as the ability to fly.