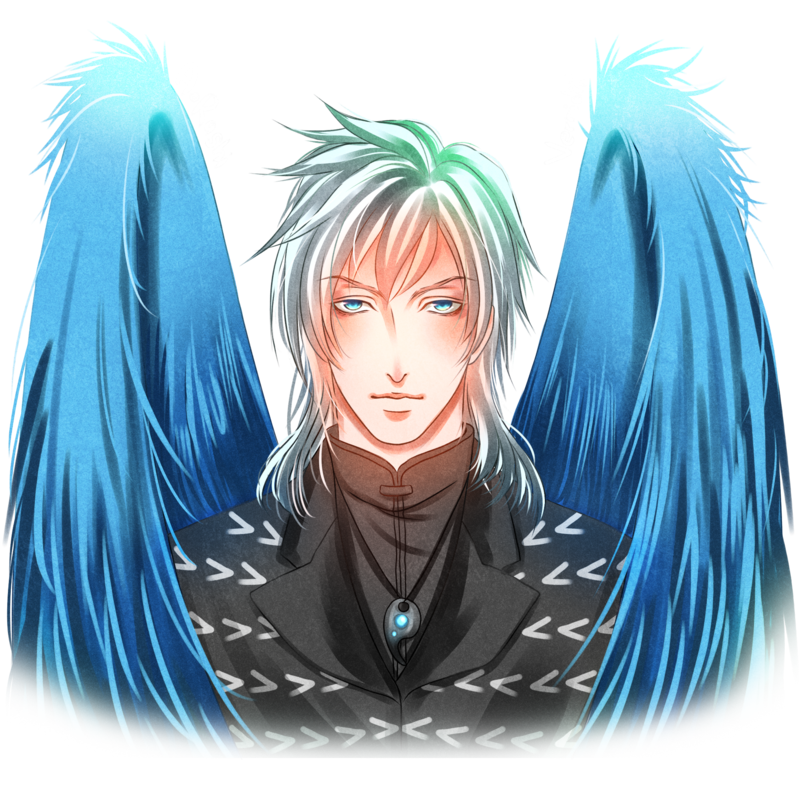 Leader of the Broken Hearts 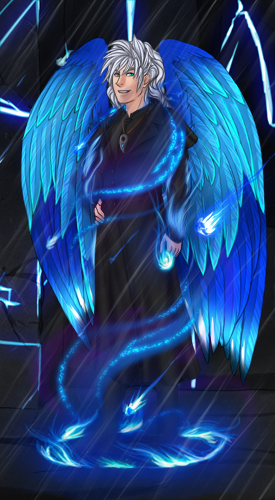 A tall, well-built man frozen in his early thirties, Cipher is a demon unlike any other; he is half-Kingdom, War and Famine. His eyes are a deep teal and hair snow white with pale skin and angular features. When he utilizes his Anima's demi-form, he has large, blue and white wings, as well as long, curved talons; in this shape, his eyes become more feline though their color does not change. He generally wears a black trenchcoat with metal studs along the shoulders, a black tunic, and a small pendant set with twin sapphires.

He holds the Xaerin gift of the animal-spirit Anima, that of a hawk, changed into a winged, tigerlike gryphon creature by Ansil'na (his former partner). In his Anima form, he appears as a rangy blue tiger with black stripes, a thin white mane, gryphonlike foretalons and large wings. He has the ability to keep any jewelry in this shape, but doesn't often - save for, in rare cases, his claw pendant.

Despite his unusual heritage, Cipher has lived many centuries - thousands of years both in his home Realm of Kurai and not. He has been greatly ridiculed by his half-Kingdom blood, often feared or hated, and he's been driven from various places in both War and Famine wherever he's attempted to settle. Because of this, he's wary of other demons and nervous in his own two Kingdoms, preferring to stay as far away from them as possible. He also does not stay in any place for too long, and moves as often as he's able.

Otherwise, he's capable hand in battle and can often see strategies or paths his comrades do not. He's well aware that he's often a target on the battlefield, and uses this to his advantage. However, he also chafes at the title of 'legendary mercenary' and may refuse to fight for a potential employer that calls him that. Any mention of the book He-Of-Cold-Truths is also something that may make him refuse a job, though he doesn't begrudge xeriin who use this particular name for him. Despite his long history, he's never earned a surname - or if he has, he hasn't revealed what it might be.

Cipher has an unusual soft spot for children, and will often risk his own life (and the lives of those around him) if it means saving that of a child's. He is similarly kind to those he cares about, and is known to be gentle, relaxed, and cheerful in trusted company.

At odd times, generally after a large-scale battle, Cipher may disappear and cut contact with all that he knows. He grows very ill from the severe use of his power, and uses these times - sometimes lasting for months to years - to recover in solitude. When he comes out of them, however, he may be quiet and withdrawn for some time. He tends to reestablish contact with those he trusts the most, but doesn't often seek acquaintances, old employers, or friends he does not completely feel safe with, and they must find him if he's to speak with them again.

Due to his half-Kingdom heritage, Cipher's abilities are both very powerful and very unique, but also exceptionally damaging to his person. It's theorized that were he to be born a traditional, pureblooded War or Famine demon, his powers would have manifested as simple fire. As it turned out, his elemental affinity for flames has combined with his reiatsu and has been corrupted, resulting in something far different than most anything that's come before.

When using his aura, it manifests as blue-teal flame with flickers of lighter-colored lightning throughout. However, it is extremely corrosive to other reiatsu and has the ability to inspire radiation poisoning in that which it touches - including Cipher himself. In addition to this, he is capable of controlling radiation wavelengths to some degree and is able to both inflict flameless poisoning upon specific targets or to remove its effects, absorbing radiation from an area at will. The effects of poisoning upon both himself and those targeted are incremental, and depend on how much power he uses for how long.

Medium amounts/average exposure: inspires the above, as well as chills and aches, severe fever, weakness, dizziness, and disorientation.

Large amounts/long exposure: inspires all of the above, and begins to mutate and corrupt afflicted flesh. flesh may also appear to bubble and melt, but may still be recoverable. colors - such as pigments found in scales, skin, fur, or hair - may be changed in afflicted regions.

Excessive amounts/prolonged exposure: inspires all of the above, and heavily corrupts exposed flesh. skin and muscle may melt completely away, leaving bone that disintegrates after severe overexposure. healing from this - for both Cipher and his targets - is a very long process, if it's possible at all.

Both using and not using his abilities causes severe damage to him both physically and spiritually. If used, it causes physical harm to himself, as he isn't immune to the effects of acute radiation poisoning. If left unused, it builds within him to the point of breaking free and endangering the lives of anyone around him, making him severely sick in the interim, damaging him internally both physically and to his spirit itself. Thus, he disappears often after being paid for any such mercenary job - lapses into a state of recovery so that he can survive, sometimes for many years.

Cipher was born in Kurai's first few millennia, to a War demoness and a Famine demon. When he was born, they immediately knew something was wrong with him; the babe would not stop crying, and he all but radiated a power that neither knew what it was or how to counteract it. When the infant, and his mother, became exceptionally ill, his father sought some way to heal them in secret - for he couldn't reveal his family to either Kingdom... they would all be slaughtered for what the parents had done.

Through secret paths and whispered words, Cipher's father was led to a demoness of unknown Kingdom named Jaerith Bloodwish. She was one who dabbled in magic none of them could ever dream of, and it was her that was said to be able to cure any ailment... for a price. And a price was paid to bind the chaos within the infant demon, to seal it so deeply within himself only a fraction of it might ever surface. The child's cries ceased as his parents gave up their souls, their bodies, to the demon-witch. It's unknown what happened to them afterwards - but is rumored that they lived and died as one of her many experiments.

Afterwards, Cipher was delivered to the Kingdom of Famine. Though initially his heritage was hidden, it was soon found out what he was and he was ridiculed and feared for much of his childhood for being half-Kingdom. Eventually, his foster family fled to Felnova to find sanctuary, and ended up in the northern lands of Icemark in the country of Vystriana. There, he was inspired by a human knight named Sir Giruvegan, and became his squire in the twilight of his childhood years. He was taught how to use a sword and ride a horse, accompanying his knight on many missions. He learned to forge in his adolescence, and worked as apprentice to a smithy whenever he was not accompanying his knight. This smith was the same that forged both the white blade Regalo and the black blade Visis, the former of which Cipher was given centuries later.

One of his most memorable experiences was out gathering wood for the night fires, lending his demonic strength to his Icemarkian companions, when he was attacked by a moon-mad worgen. Unarmed, he tries to flee, but is trapped between the beast and a tall cliff. Only a stumble saved his life; when the creature lurched at him, trying to grab him and take him to the ground, Cipher nearly fell over a snow-hidden log and the worgen went hurtling over the cliff to its doom far below.

Shaken by the sudden attack, on his way back to Icemark, the young demon is further startled to find the rest of the worgen pack suddenly around him - but they were not hostile, and soon assuaged his fears. They thanked him for taking care of the maddened one for them, and offered to help carry firewood with him back to where he lived. Accepting nervously, the wolf-men gathered far more wood than he could ever have on his own, and traveled to the city with him. Their alpha met Icemark's Lord, and trade was established. Oftentimes, Cipher is credited with this development, much to his chagrin.

Years later, Sir Giruvegan was killed far from Icemark; and by that time, the young demon had very little left keeping him in the city. He was looked at as different even by those who knew him, and thus he decided to return to his Realm of origin, and moved to Kurai. Instantly, he was treated with similar fear and hatred - but this time, he had no knowledge of how portals worked in this strange land, and thought he was trapped on Kurai forever. Enlisting in the Famine army, he sought to win honor and prestige as a warrior, much like his knight had back in Vystriana. Instead, he and his group are sent to a suicidal raid in which he was supposed to die.

The Death demons caught them and slew almost every one of his companions; only he and another young Famine demon were spared, and were dragged into slavery under Death's Lord. The other demon died under the strain, but Cipher fought like a wild beast, and was thus considered unfit for work. He was bound and given to an insane Demonic Reaper,

- returns to Kurai, is enlisted into the Famine army; is sent on a raid to capture and/or kill Death assassins, and is the only one left alive - is given to a mostly-mad Reaper, and nearly slain; kills the Reaper and escapes cross-Realm into Xaeri - almost dies there, but has pity taken on him and is given an eagle Anima - spends the next few hundred years MIA in Xaeri - reappears for the Bloodreign War - does battle with the xeriin, then switches side to fight the demons, then disappears - is gone until the present day - reemerges to suck the darkness out of Ibenia and save EVERYONE EVER the end

* relationship unclear; Cipher had feelings for her, but it's unknown if this was reciprocated