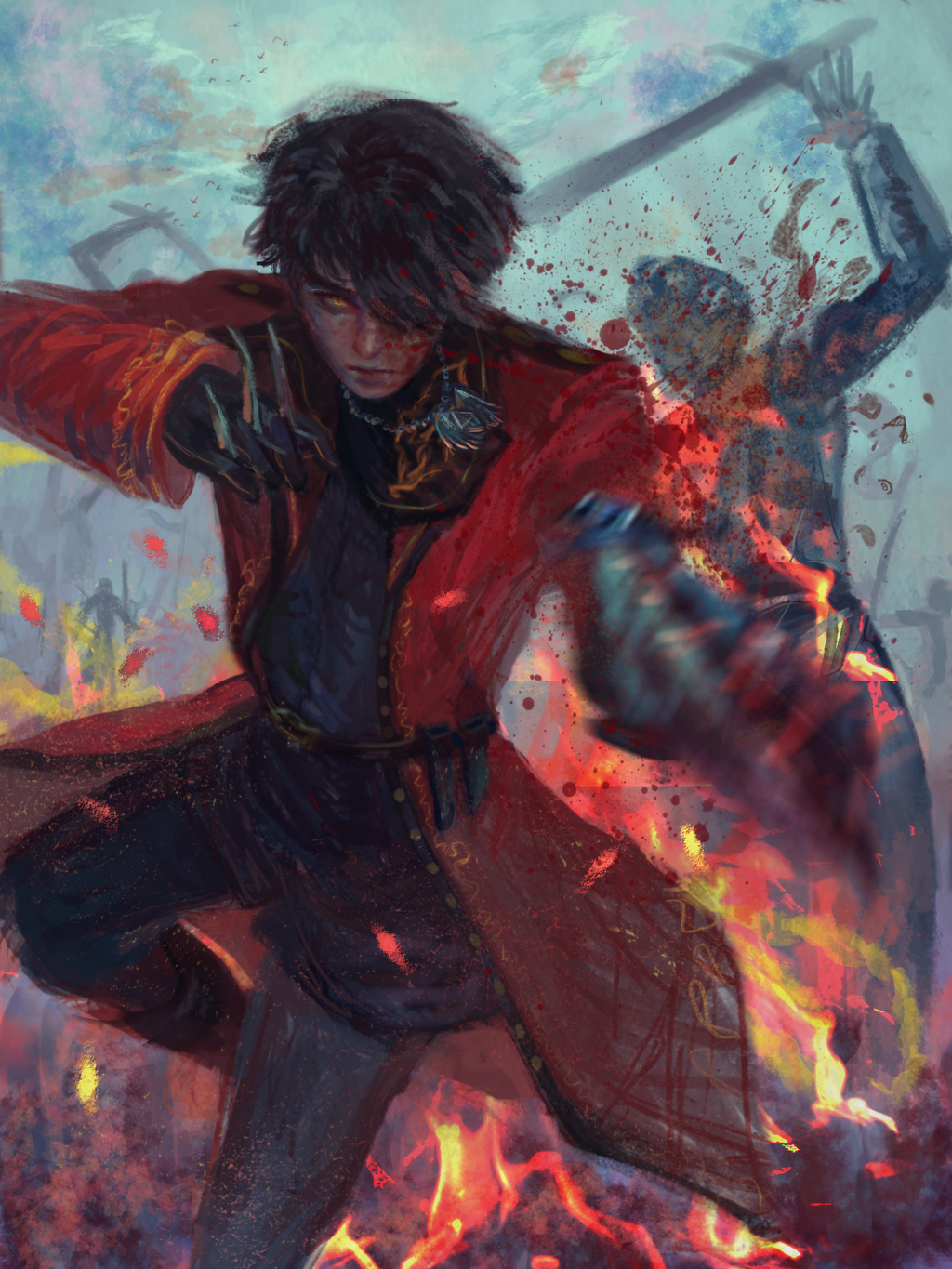 Tall and lanky, Damien is a Famine demon-turned-werewolf with a slender build, lightly muscled, built for swift, hard strikes and short distance sprints. Trained as both sheizi ninja and a war-mage for the Kingdom, he is built for more magecraft than the warcraft favored by his current Lord. He sports dark golden eyes slitted like a cat's, and thick black hair that falls around a narrow face.

Raised as a noble in the House of the Aeon, Damien prefers to wear fine clothing in reds, blacks and golds. He wears tall black boots, tight leather breeches and a close-fitting, comfortable and decorative tunic, beneath a red coat fashioned with a belt that holds his daggers around his middle. around his throat is a small pendant shaped like folded wings. More often than not, he also wears leather gloves.

Beneath his noble bearing and fine clothes, Damien's right arm and shoulder is covered in thick burn scars. The remnant of an attack involving the terrible Hellfire, he can still feel its burn in his flesh, and believes he will never be fully rid of the feeling. Another scar in the form of a savage crescent marks either side of his right shoulder, the bite of the werewolf that changed him.

As a werewolf, Damien appears to be a quadrupedal canine, lanky in build but overall well-proportioned. He sports wavy black fur in a half-mane around his face and the back of his neck, as well as a short, but fluffy, tail. Most of his fur is very soft and silken, and a mouse brown in color.

Black markings suffuse his forelegs and up to the hock in his back paws, with a line that leads up his hindquarters to his tail, which is completely black. Markings of the same color lance down his back, and lighter coloration can be found on his neck, belly, and legs, transitioning to stripes along the latter two. 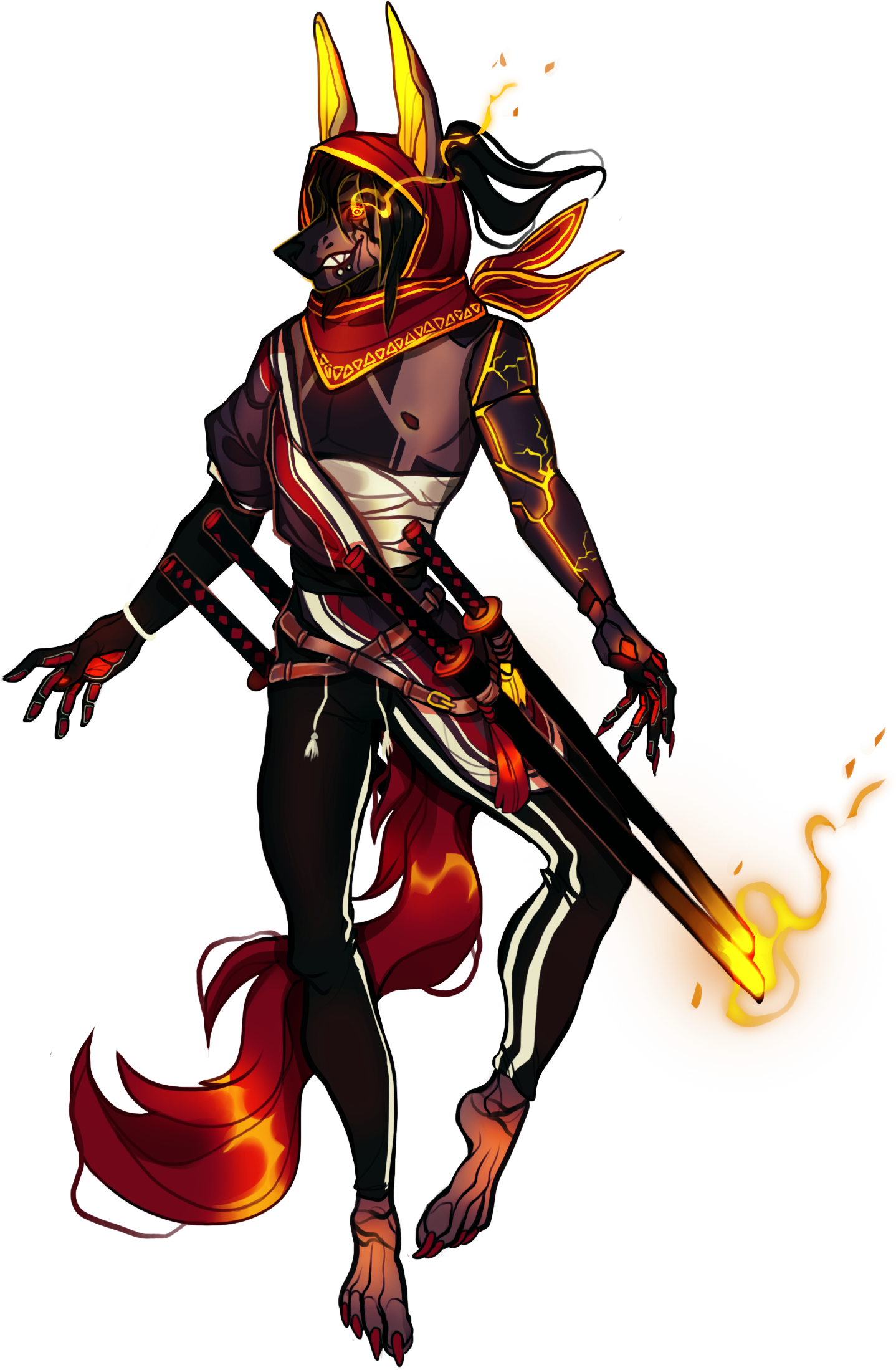 In times of great and desperate need, Damien will transform into his demonic true form; that of the Tri'akun, as all n'vaen know. In this form, he appears as a canine creature with long legs and arms, scarlet talons, and almost disproportionate features. He is often seen with a mixture of clothing, generally ripped and shorn from the transformation, often drawn up into a tattered hood from which long ears poke.

His right arm appears to become made of disjointed metal plates dropping and oozing with lava; he has little use of the limb in this state, and instead runs on three instead of all four. His ears and tail are red and gold, with the gold glimmering with its own light. The rest of his pelt is largely the browns and blacks of his werewolf form, where his eyes become like lava in their appearance and substance, sometimes leaking tears of molten rock.

Oddly enough, Damien uses summoned swords in this form, up to four at a time; these swords burn with fire, and often explode upon impact. Unfortunately, he may only access his Tri'akun a handful of minutes at a time before this power burns itself out completely.

Damien is a stern leader and well-initiated in the art of royal affairs; he's a tactful strategist and is keen on silently-gathered intelligence - knowledge is power, something he believes in to an extreme. Beneath the leadership of his Lord, he is willing to do nearly anything, so long as it doesn't break the system of honor the Famine royals have long upheld. He believes in a code of chivalry very much, and is held in high regard because of it. Due to his loyalty, he's considered Slain's right hand.

When not held in a noble's light, Damien is rather laid back and quiet, calm and gentle to those he cares for. However, the loss of his pairbond and unborn child has hit him very, very hard, and he's prone to deep brooding and melancholy silence.

Damien was born with an exquisite ability to control his own reiatsu, enhancing speed and power, even as a child. Seeing his potential, he was enrolled in both the military's academy for mages, and trained as a sheizi ninja for the Kingdom of Famine. He learned how to use his speed in conjunction with the abilities taught to him as a ninja, and learned to incorporate small daggers and other such tools into his fighting style.

Using acute reiatsu control, he can enhance not only his speed, but his accuracy and strength as well. He can force a strike to hit harder than it could have been, lift some things previously impossible, or even hold off something much stronger than him. However, this drains his energy very quickly, and he doesn't use it very often.

Other than speed and strength, he can hone a thrown item's accuracy through the air by small adjustments in the aura an item might be touched with. This way, he can hit a target that's quite distant with an improved chance of striking where he wants.

For You, My Lord