Drana was born a half Death demonhorse, from her father's side, and a half rohn'na, from her mother's. Their names are Kjiraak and Verya - both non-equus horses, one belonging to Red, the other a breeding sire in the keep of the esteemed Death Kingdom in Kurai.

How she came to become an equus is a long tale, summarized here in brief. Bred to be the mount of an Ether dear to her keeper, Red, her purpose was lost when her would-be rider was slain. Overcome with grief, Red cared deeply for the filly when she was born, and named her 'Drana', the elven word for memories.

When she grew strong enough, the knight began a journey to find recovery after great loss - she accompanied him with her dam, Verya, and his mount, Griever. However, his health began to deteriorate, and through his travels, he grew sick and weak. Briefly, he met a skydeer that sought to pull him from the downward spiral of depression, and she partially succeeded. Drana, a happy and bubbly filly, was content to play with her master and travel the worlds with her mother and stout companion... but the peace was shortlived, and Red grew ill once more.

Taking shelter from a storm in an old cavern, Red was gifted a vision in his sleep; that of a tortured woman that seemed familiar enough that it jolted him awake. Drana, roused from slumber herself, watched as a ghost of panic came over her keeper - and immediately, they set out in search of the phantom woman, guided by a mysterious force. For hours, the filly struggled to keep up with the two bigger horses as they cantered down steep mountain trails, at last stopping at the ruin of a destroyed tower left untouched for many thousands of years. The horses were secured outside, much to Drana's chagrin. But she knows now the events that occurred within the crumbling ruin; how Red stole within, swords drawn, every sense alert for danger despite the illness that ravaged his body. It appeared to be a prison, abandoned many, many ages past... and yet some of the bones were fresh, and the stench of blood grew only stronger the deeper and deeper he delved.

At last, he heard screaming. The knight rushed in and parried a killing blow aimed for a hapless woman in chains on the ground; the vampire who had already drank her child dry snarled as twin swords sliced away his arm, ending in a gurgle as the second bit through his throat. Three others, there were, three he fought boldly. The last was the strongest, and the oldest; and the one who drove a dagger right through the man's unprotected ribs.

At last, the vampire fell. Red, clutching his bleeding side, turned to look at the woman and her dead child... but it was not the one who he thought she would be. The likeness to the one he loved had been but an illusion, as was the tortured child - the woman smiled as her body began to shimmer and disperse, vanishing into a cloud of light... and when that light cleared, a strange bone flute lay on the ground, humming with dark yet seductive energy. Take the Flute, a resonating voice said. Bring it to me. Bear it quickly, brave warrior; I will guide your steps. Wounded and delirious, Red might have thought the voice was a hallucination, but for the sudden energy in his limbs and the strange sensation of being pulled. He picked up the flute, and was stricken with severe pain - but he found he could not stop, and did not rest until he reached the horses outside.

Drana, the young and curious filly, trotted close to Griever as Red mounted and they took off once more, to a small clearing in the woods were a portal opened and, without question, man and horses rode right through. They were planted at the base of the great Darklight Mountains in Felnova, before a cavern old and dark. Dismounting, Red stumbled towards the cavern's opening, into the darkness... where he could not see, and his only guidance was the invisible force that pulled him ever onward.

Stone turned to crystal; the tunnel opened into a wide, glowing cavern, one that awed the little filly that had wandered after him. The other two horses, unwilling to follow, could be heard nickering distantly, but Drana could not believe her young eyes, as beautiful as the horse had ever seen. Following the pull, Red placed the flute on the pedestal that rose in the center of the room, and suddenly, the pain was gone. He took a step back and fell in confusion; dark fire erupted around the flute, then blistering white light, and then they were in another place, at another time.

A forest, beautiful and lit by rays of the shimmering sun. Colors brighter than they should be, an absence of pain or grief, a feeling of contentment... and the gargantuan form of a white and black dragon, as he stared down at them with a smile on his face.

You have done well, the god intoned. Gurthril is returned to safekeeping, thanks to you. They - the vampires - might have released her, if I had not found such a soul strong as yours. He saw the question in Red's eyes, however, and shook his head. Shadis and your child are safe, my son. I am sorry that I deceived you so; but time was of the essence. You will meet her again, in time. But now, there is a gift to give. I see you have brought someone with you who is most important to your heart; and a fine soul she is, with great destiny weaved within it.

He leaned down to touch Drana with his massive nose, and suddenly, she could understand him as he spoke. Go forth as an equus, little Drana; little memory. Help Red, and once you do, go out and find that in which you will seek.

And suddenly, they knew blackness. But when she awoke once more, it was to a new and bright and amazing world, a world she wanted to understand; she found thoughts and questions and words in her mouth, and an insatiable curiosity filled with endless questions. Thus, she became an equus... and perhaps thought, for quite some time, that she was the only talking horse in the world. 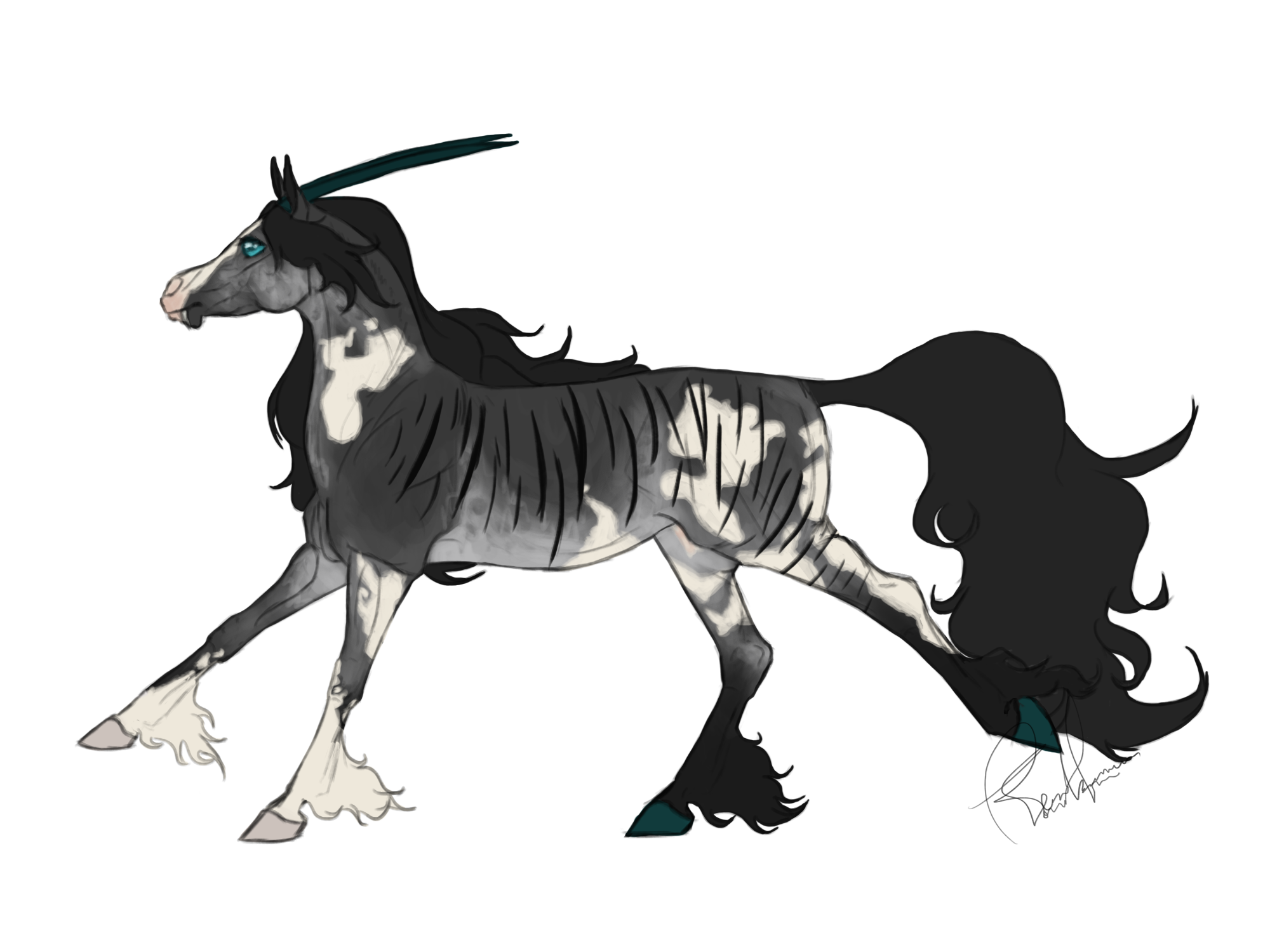 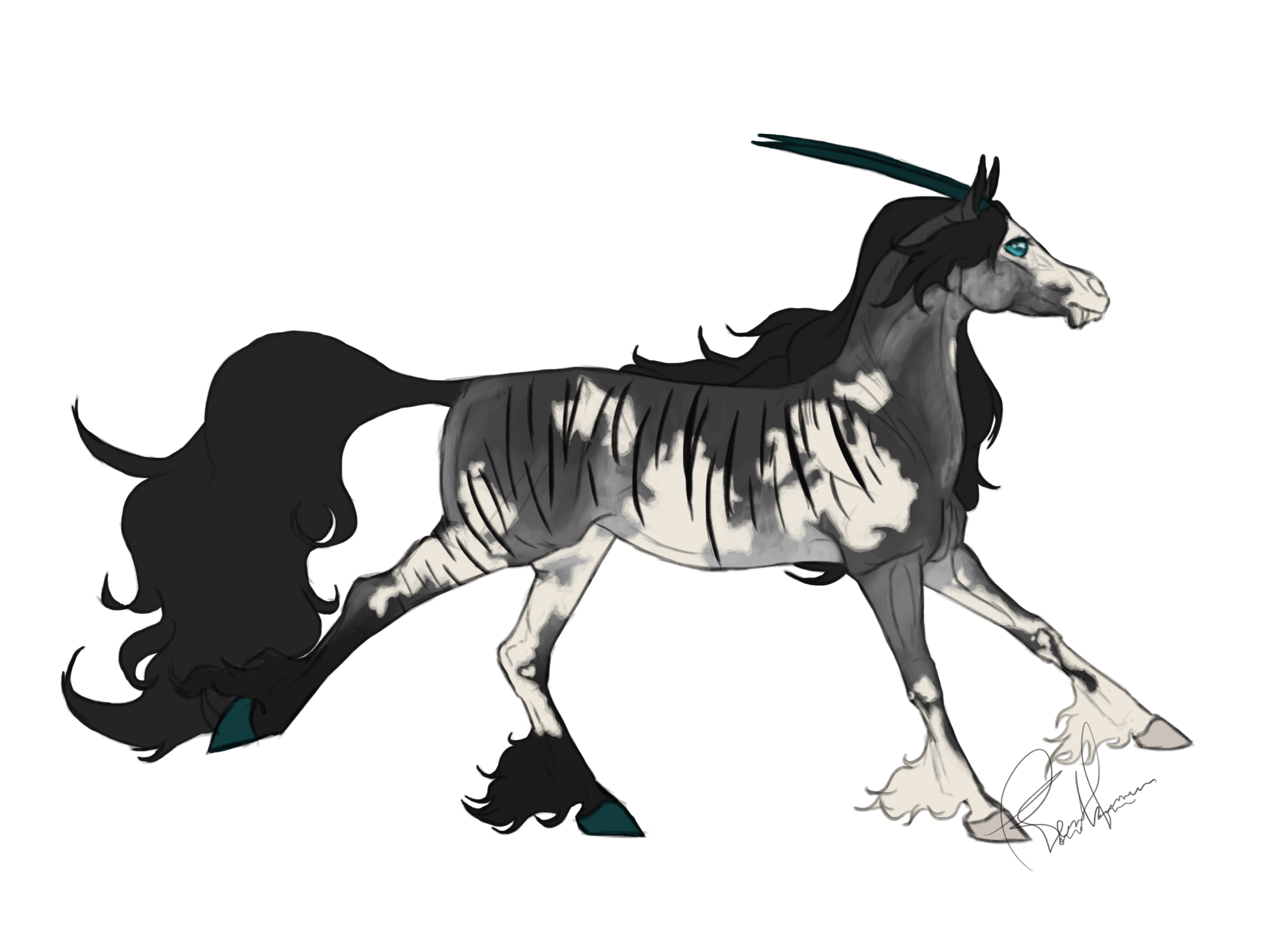 Drana is an equus with a light build of elven origin, with the features and fangs of a demonic horse of the Death lineage. She's blue roan in color, with white piebaldism in great splotches on either side, different from left to right. The skin of her nose is pink, and her eyes are a sharp and bright teal, as are her hind hooves and two long, straight horns that curve back from her skull.

Inside her mouth, long fangs curve from where a traditional horse's wolf teeth might be found, from the top of the jaw protruding down and curving slightly back. When opened wide, she has three sharp teeth behind these long saber fangs, though the rest of her mouth seems to have a normal horse's teeth, marking her an omnivore instead of a strict herbivore.

She has feathering at all four fetlocks, and two white socks (resulting in cream-colored hooves) on both forelegs. Her mane and tail are bitch black, and quite long, with the mane traveling several inches past the withers. On both sides, symmetrical black stripes score across the blue roaning and over the top of the white, matching her black mane and tail in color.

A sweet and bubbly foal, Drana is nonetheless fiery and determined, highly stubborn, and very protective. She is insatiably curious, and almost never stops talking, especially about things that intrigue her or those she wishes to learn about. She seems to be unable to keep quiet, and has little concept of manners, often commenting rudely or offensively, even if she may not mean it.

Rarely, Drana is afflicted with the desire to play roughly with smaller creatures, until her father's bloodlust takes over and she accidentally kills the creature she's been attempting to play with. Most often, it's a squirrel or small bird, though she's been known to accidentally tear apart everything from lizards to small cats.

Unlike her father, Drana has been gifted with the magical acuity of an equus; however, like her father, her offensive skills are entirely physical. She can rip and tear with her fangs and sharp teeth, gore with her horns, and deliver powerful kicks and strikes with her hard hooves and muscular legs. She is very swift, and can run for short distances at greater speed than normal horses.

Drana's magic is entirely defensive, and usually used accidentally. When in danger, and about to be stricken, she may 'warp' out of the way; she leaves a peculiar afterimage of herself when she does this for a few seconds, bright teal light formed of her aura, sparkling until it fades or until she does it again. When moving, long, streaming lights may come off of her accidental warping, and if she uses it too much, she will tire herself to the point of being unable to move.

Thank you to all the wonderful people who helped me bring her to life, as well as all your support!! <3