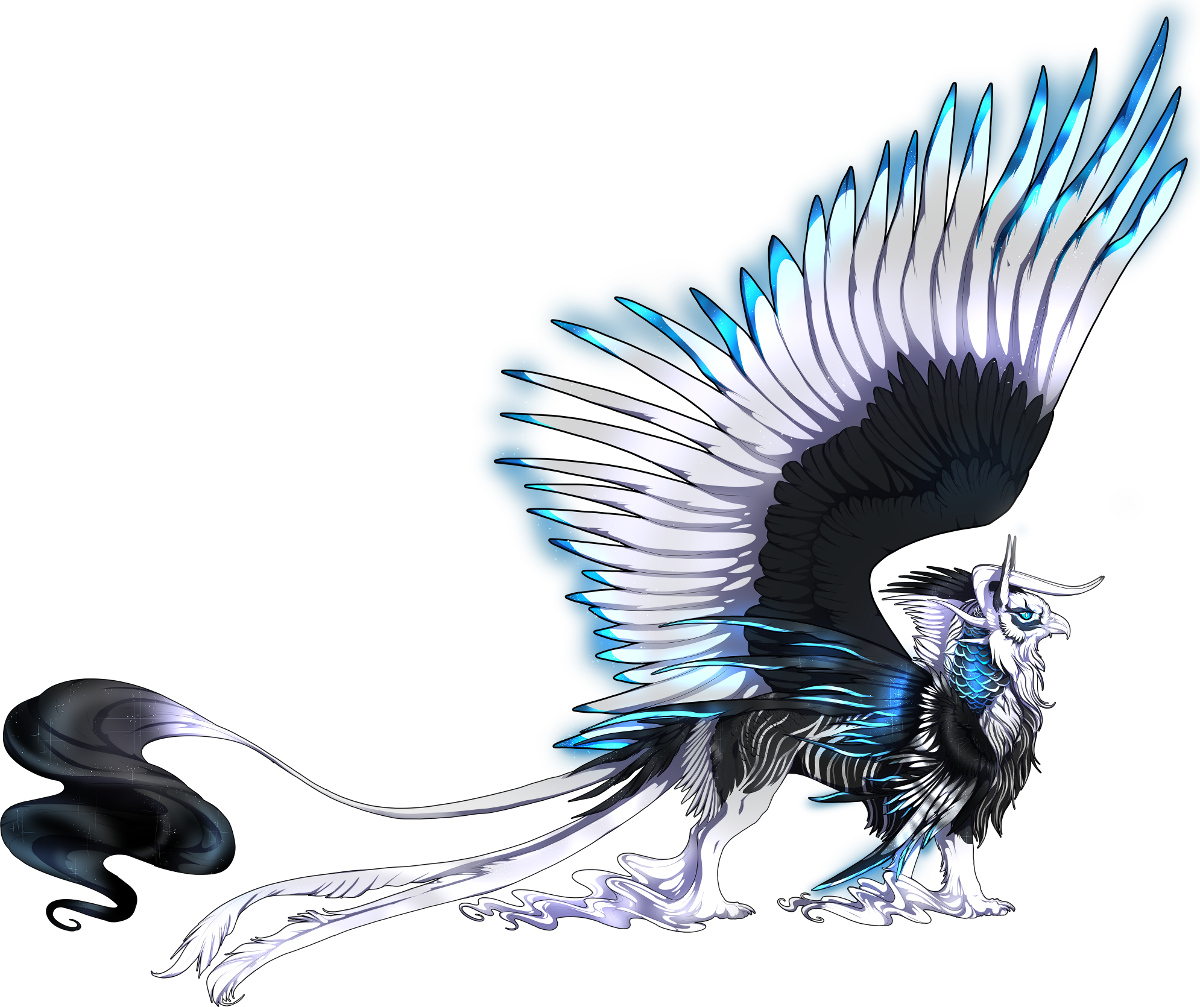 Eterna
death carried on wings of starlight
You are nothing; you will always be nothing. You aren't even a gryphon! Why should I bow to you, an insignificant speck on this world, where I am of the mightiest race and should rule over you instead? Bow before the Anarya, and submit to the rule of my Tari'rae and I... or die by my claws alone!

on Wings of Night

Eterna was hatched a small, white bundle of fur; her egg was black as night, and covered in minuscule stars. As she grew, she became darker and darker, until she gained the even mix of plumage she does today. 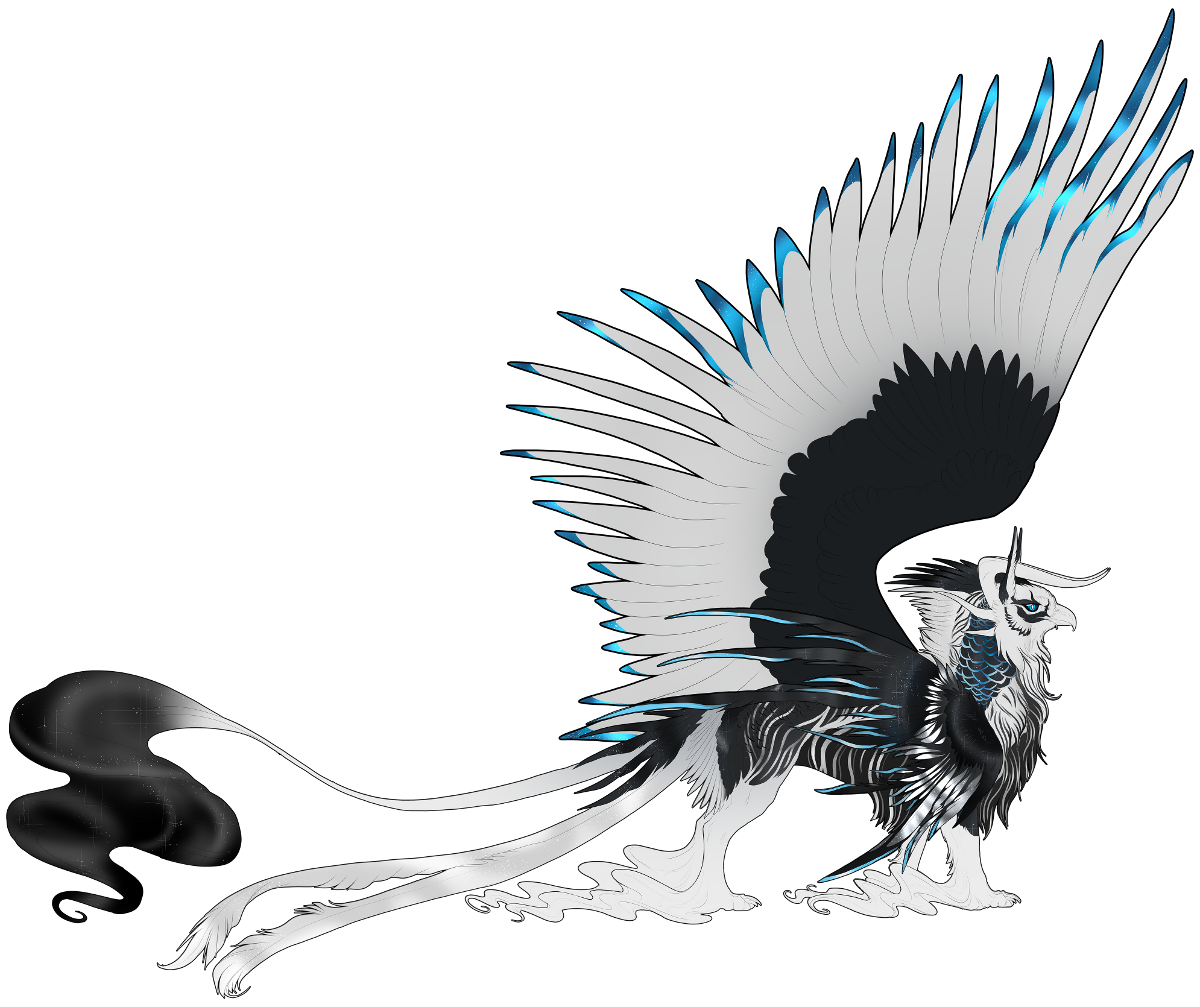 As a grandmane, she is large and imposing with a thick ruff of fur and many decorative feathers. Her head is shaped much like a falcon's, with seemingly delicate features that belie her aggressive nature. Three horns jut from the back of her skull, white in color, with the topmost set much larger and curved forward like a bull's. Her white face is striped in black, as are the backs of her long ears. A long, feathered crest extends from the top of her head down her neck, black changing to stark white halfway down.

The feathers on her each side of her neck are black, their edges tipped in iridescent blue. The fur beneath these feathers extends from her throat down her chest, and is black streaked in white that grows thicker nearer the feathers it is. Large, long decorative feathers sprout from her shoulders, colored white, black, and blue, where her sides are black covered in thin white stripes. Each leg is snowy white, and has long fur that flows from her ankles and fetlocks.

Two long, white feathers trail on either side of a black-tufted leonine tail, giving her silhouette from below a mimicry of a swallow. Both wings are large and long, coverts black where both primaries and secondaries are white tipped in blue. Her eyes are sharp blue with white pupils surrounded by a ring of black. All of her blue glows at night, and in times of great emotion.

a Cry of Death

Eterna is a powerful Val'istar, and has risen to the top of her order - she commands the magically attuned of the Anarya, and answers only to Adair, seeing others in her Flight as too weak to pay attention to. She is haughty and arrogant to a fault, and believes none can withstand her and her leader's might.

She has no compassion and little regard for even members of her own species, and none for those that aren't. Everything that isn't in her Flight, to her, is prey - she believes there is nothing more regal and powerful than a gryphon of the Anarya Flight. Eterna seeks to dominate everything, save only for the Reaper, Adair. To her alone does she hold loyalty, and to her alone is there an unbreakable bond. Love is anathema to her, and friendship is a needless barrier. Most often, she is either outright mean or simply cold to those she must interact with, if they are lucky enough not to draw her ire.

Perhaps tied to her need to dominate is a primal streak of bloodlust often unleashed against whatever she is pointed at. Once in the throes of battle, she will descend into a berserker fury, and will not stop until everything around her is dead... including comrades that unfortunately get in her way.

the Herald of the End

Unusually, Eterna does not have any sort of elemental prowess; her magic is a strange, chaotic mixture of her own reiatsu and the energy of those around her. She cannot control it or focus it at all, and it only awakens when her emotions are heightened. Different negative emotions generate different responses, though very few are yet known.

Using any amount drains her, and thus she is much more comfortable fighting with talon and beak alone; however, it will often manifest as a non-offensive, visible aura before her emotions trigger it into activation. Thus, there is some warning given to both her and her opponents before she loses herself to its hold, and she may have the opportunity to end the battle before it goes too far. This aura appears to be black and midnight blue dotted with minuscule stars, much like a clear night sky.

Anger/Rage: These emotions often bring about swirling spires of energy that strike at everything; wounds inflicted are as if touched by acid. This is a heavily offensive ability, and is very draining.

Bloodlust/Hunger: These emotions often bring about tendrils of thick, near-solid reiatsu that seeks to grab and surround opponents. To be touched by it feels as though one is being burnt. Also offense, but less draining.

Jealousy/Envy: These emotions often bring about a swirl of reiatsu that hovers around Eterna, repelling anything from coming near. It also drains things that come in contact with it, and thus isn't nearly as tiring as other emotions.

Having never left the wings of the Anarya, Eterna's history is relatively brief. Born to two unknown grandmane gryphons, she was raised as any other chick... until she killed one of her siblings for being fed before her. It was termed an accident, and little else happened before she struck her adolescence.

After she had fledged, she became an unreasonable thorn in her mentors' sides; her magic was powerful, but they could not teach her to control it, and any attempt to subdue her attitude seemed to do more harm than good. Sending her to train as a Astalde resulted in a brief war with another Flight, and the then-reigning Aran'raa sentencing her to death.

However, Eterna won a second chance and was given to a she-gryphon named Adair who was the current leader of the Val'istar, having joined the Flight not long before. Adair seemed to inspire the young gryphon, and somehow won both her loyalty and respect. When the Demonic Reaper became Tari'rae and the old Aran'raa died, she took over leadership of the Val'istar, and has remained in this position ever since.

the Stars ever Shine

the Pictures of our Past 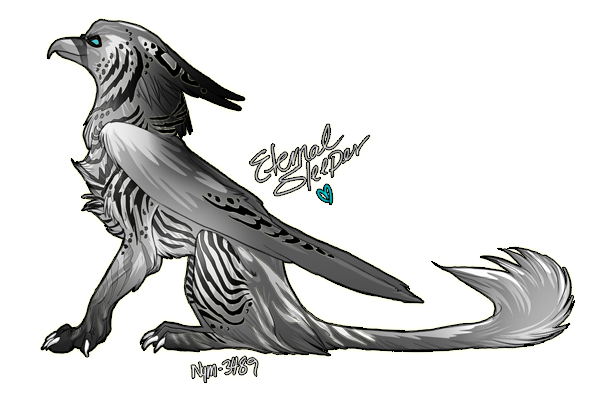 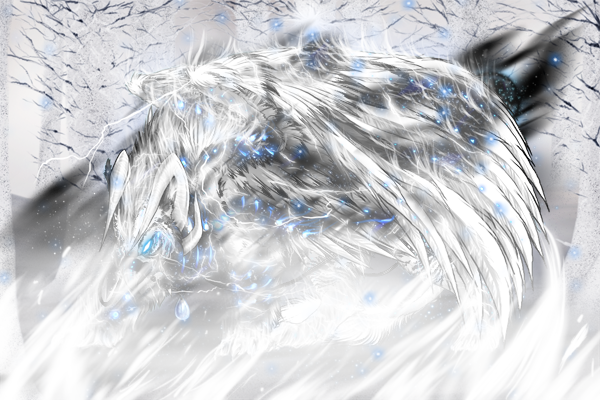 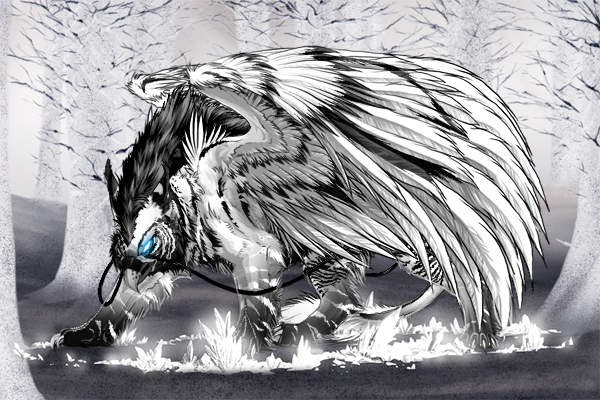 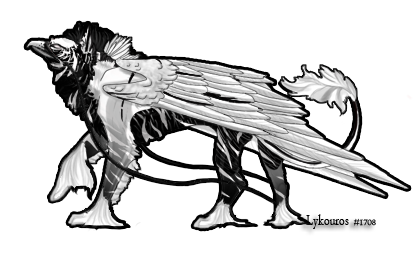 (these images show a younger Eterna; a previous design)

whom Honor is Owed