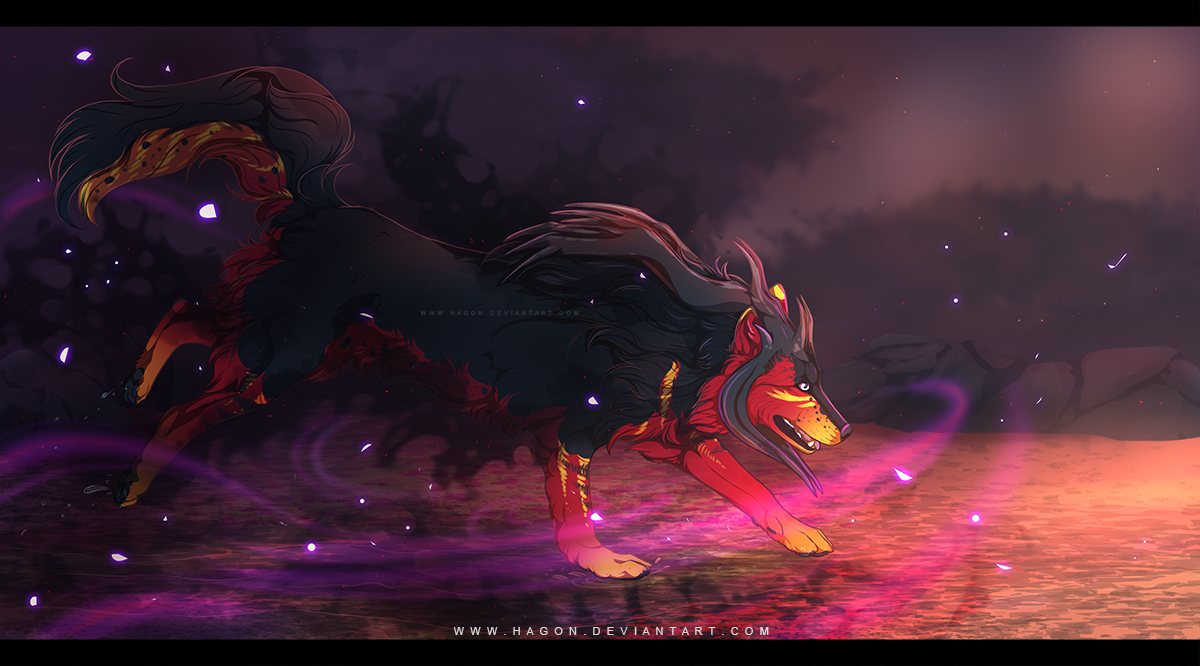 Arrogant, cocky, and well worth the annoyance of constant failed jokes and smart-ass comments, Favron is both skilled hunter and infallible friend. With a sweet-talkin', smooth demeanor and proud bearing, he befriends quickly and woos the ladies with his charm.

He doesn't seem to take offense to anything but the harm of a female; if it comes to that, he'll quickly lose his temper and boil each droplet of water in an opponent's body to steam. He enjoys doing this to small snakes, as well as the rare odius sin. His fascination with reptiles susceptible to fire is tried on everything with scales he meets, if to a lesser degree.

He respects the current Tradon, but is loyal to Moku beyond any; if asked to, he would do anything for his friend. Hiding his deviation with a quick grin and cocky laugh, Favron knows well how to abide pack laws and yet not be seen. Moku's truest ally, he has few friends who are unaware of his worth by their side.

Fire, flame, heat. Favron lives it, controls it, and is it. Said to have been merged with a fire elemental at birth, he prides himself on his unusual looks and fiery power. He cannot control lava and heat, however - but he enjoys charring rock to the melting point to simulate its effect.

Oftentimes he'll unintentionally set things on fire, or even partially burst into flame when taken by a strong emotion. When he's bored, he'll make little creatures out of fire to talk to, or crisp something to coal and build items from those coals. Once cooled, he usually destroys them, unless one of his packmates saves it for their own den. He can summon fire as he pleases, though constant use tires him, and over using his energy can lead to a scorching death from the inside out.

He is exceptionally weak to ice and water, and becomes sick in the cold. Living in Icemark wasn't a choice he liked to make, but to avoid this, he keeps an aura of charged and heated air around him, which leads to occasionally catching stray leaves or packmates' pelts aflame. He can draw fire off of things he doesn't want to burn, and if too weak, absorb flame from already-burning things to restore energy. As such, in battle, he likes to set everything around him on fire and let it burn in case he needs an extra boost.

Favron's most noticeable feature is his massive horns; long enough so that he can scratch his back with minimal effort using the tip, black horns curve back over his neck and shoulders, ears laying just beneath. Two more curve forward just underneath, much smaller and to the fore; two other smaller ones rise just above his eyes. As such, he can't hear very well, and is unable to push his ears forward to catch sound.

His pelt is red, streaked with black like soot along his back, three of four paws holding lighter-colored toes. The tips of his ears are also yellow (possibly the only way you can tell he has ears), as well as three streaks on his face: one from his nose, the other two underneath his eyes. More streaks can be found on his shoulders and tail, covered over by the black that runs from the end of his nose down to the tip of his tail.

Fav's eyes themselves are white, and when he uses power, they glow like the heart of flame. When he's tired, they darken to a light blue, then to yellow, then red, and when he dies they will fade all the way to black. A testament to his affinity for fire, he can never hide anything about the way he's feeling.

He smells constantly like soot and ash, and can be seen smoking, as well as blowing smoke as he talks. Some find it amusing or endearing-
Others just can't stop coughing long enough to decide.

Coding and content (c) me, art (c) Hagon, Khaanz, myself, and Kirra/Dawn.