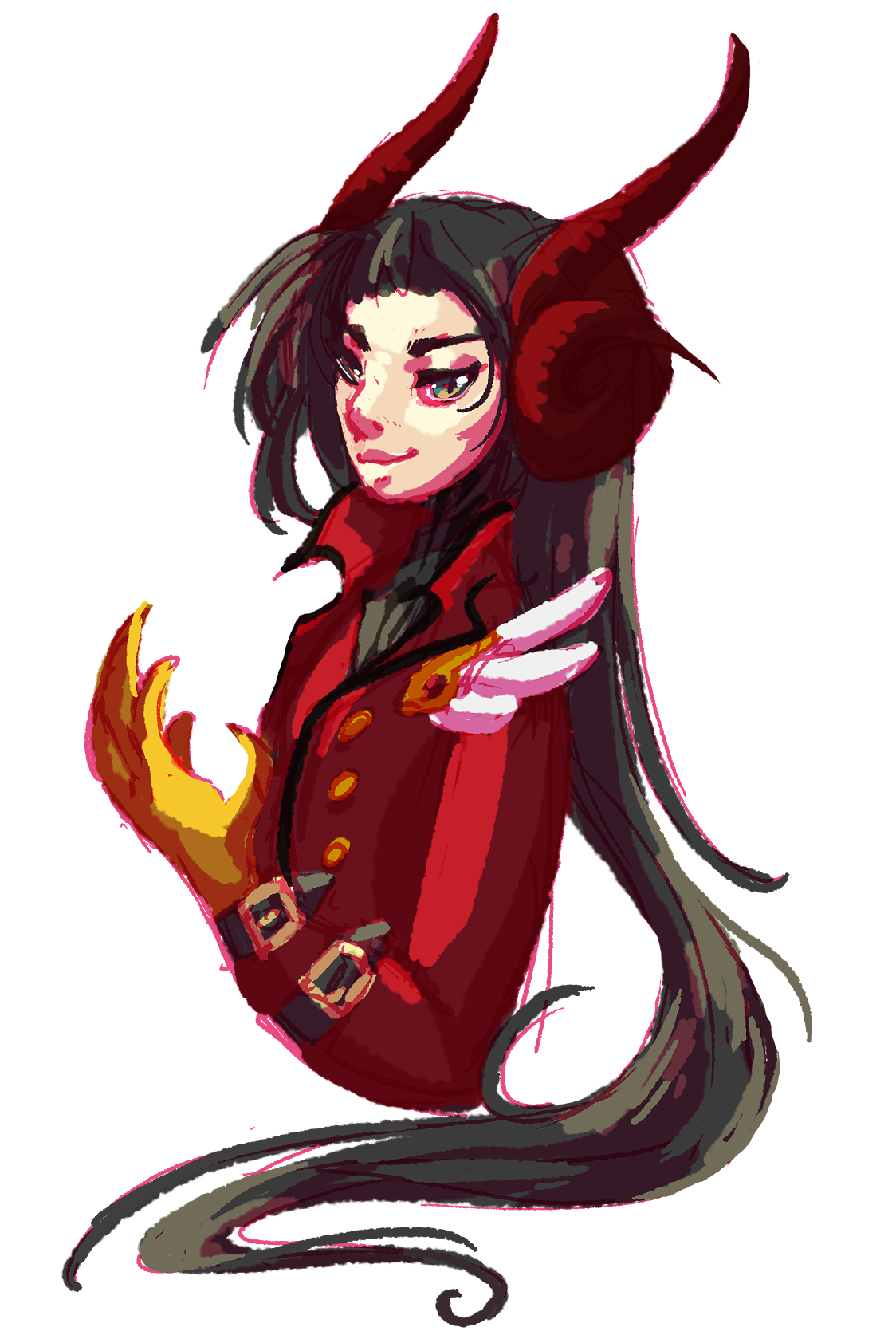 Named after the dragon that saved his father, Feanor is a young war demon who looks to be 12 years of age. He has yet to stop aging at the demon's Freeze - though he has been alive for 37 years. Born in Kurai, he was initially taught to hate and fear dragons, until his family was overtaken by a rogue band of lesser demons. His mother was killed, and his father took him to Felnova, seeking refuge. The demons followed them, and a silver dragon arrived to save them. Filled with gratitude, his father thanked the dragon profusely, and vowed to ever be in his debt. However, the dragon had only one request - that the child be renamed after him, and taught to see dragonkin as allies. Feanor's original name was Kotavu.

As a boy, Feanor was very bright, and quickly adjusted to life in Felnova. He learned to trust dragonkind, and was taken as an apprentice by a mage in Godshome. He was taught in the summoner's art until the death of his father, where he returned to Kurai to bury him. He was taken in by Xavanth, and returned to Felnova to continue his studies. The boy has remained at Xavanth's side through life and death; his reign as a Pestilence Lord; finally reuniting after the Kingdom's betrayal and their escape back to Felnova.

Feanor is very quiet, somewhat subdued, easily contented and exceptionally laid back. Though nervous around newcomers, and those he doesn't know, he's learned to withdraw behind a mask that hides his true emotions well. He is eager to please and would do anything for someone he cares about. Due to this, he's easily taken advantage of and can be quite naive.

At an early age, Feanor found himself a natural at conjuring magics - that, coupled with his affinity for animals, made him a prime student in the art of summoning and sealing. He was taught by a Master in Godshome how to first bind a creature to his will, then seal it away, before being able to summon it to do his bidding and later release it back to wherever it came. First, he was able to practice on small creatures, such as rodents and cats - but now, he may even bind and summon dragons with enough time and energy. He may only seal two at a time with his current skills; any more will leave him completely exhausted. However, since leaving the Faction of Hope, he has learned how to place kv'naer summoning runes within the mind of an animal or person, and call them to voluntarily come if they will it. Though not as powerful, it is much more fitting to the kind boy's heart, and he has multiple summons he can now call at any time. A list of those he may call is as follows:
Malakar || old white, fluffy eastern dragon || ghost; bard
Uncle Faen || western silver dragon || ghost; psuedo-uncle
Iallriel || delicate elven woman || ghost; Xavanth's former pairbond
Toto || fluffy cat || ghost; Uncle Faen's friend
Gorhu || large brown/white/silver Vystrian wolf || alive; knight of Vystriana


Other than that, Feanor is quite good at limited glyph magic, such as defenses and scrying. He is also somewhat hard at hearing for a demon - his horns block out a lot of sound.

Feanor appears to be around 12, and is in the very beginning of demon adolescence. He is around 5'6, with pale skin and wavy black hair that falls around his face to his shoulders. The rest of it is tied back into a very long, often hidden, ponytail that falls to around his knees. His eyes are very unusual - they're iridescent, gold in the light and teal in the shadows, with faded, cross-shaped pupils. Obscuring most of his ears are a set of branching horns, deep red in color, that twist both back and up, as well as curling back forwards. His slender fingers are tipped in dark red claws.

He likes to wear blacks and reds and deep maroons, to accent his features; long orange-gold gloves cover the claws of his hands most of the time, held by two bands of black leather. His tunic is most often black or silver, and he sometimes wears a small ruby pendant, set in gold. Most often, he wears a combination of a maroon trenchcoat and long black cape, especially in colder weather (which he despises). Beneath, he wears dark vilam and knee-high boots, often scuffed and dirty from running about. At his side is a rarely-used sword that he has no business carrying.