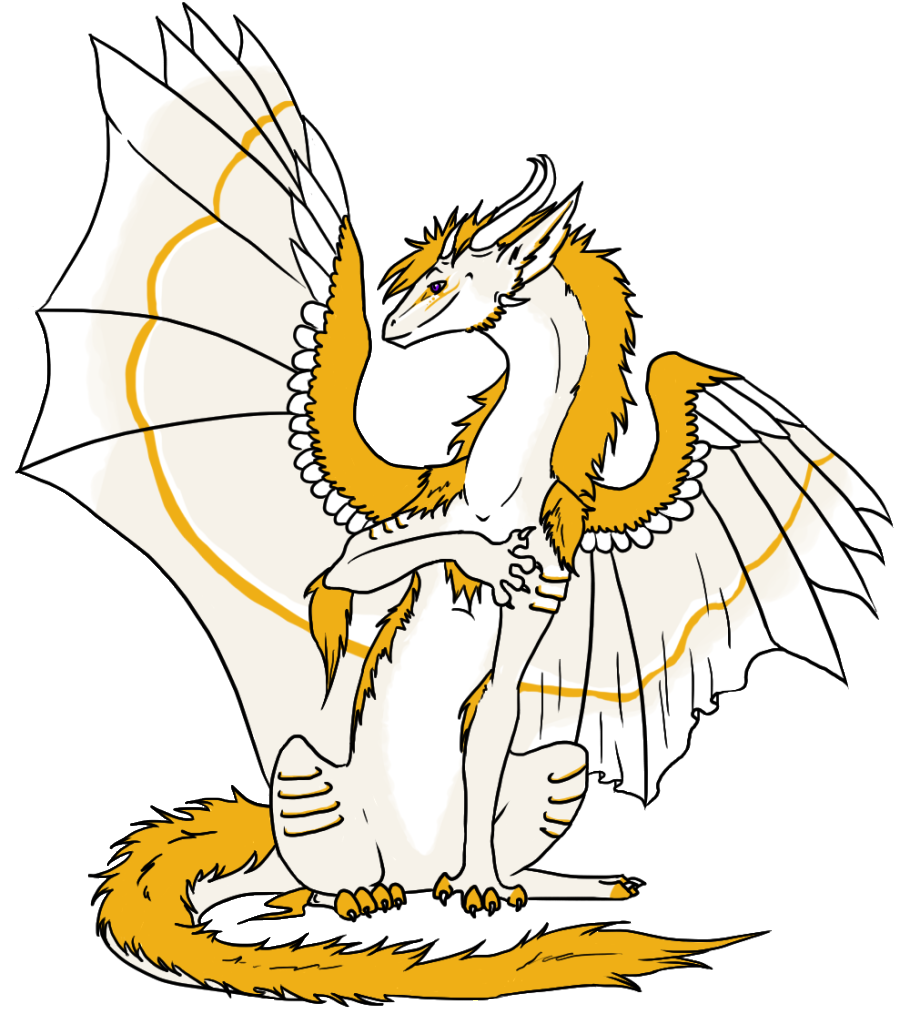 Howl is a nobleman, born and raised in the light of Arrowhead's royalty. Through many years of tutelage by his mother, Narkessa, and his uncle, Hijka, he knows every law and rule inside out, and is quite capable of enforcing them.

However, he also has something of a wanderer's heart, a 'wild side'. He openly disobeys the elders, who would rather keep him on a short leash, and loves to work jokes and mischief into every situation. Somewhat arrogant, full of himself and proud, Howl loves to challenge and be challenged, reveling in the prospect of a good-natured fight.

But he isn't without his heritage. To friends, he may seem overzealous in his endeavors, but to family he might seem overprotective. He holds all of Arrowhead dear to his heart, and would fight to his last breath and beyond to defend it from evil's sharp grasp. A noble dragon at heart, he might have his moments; but his thoughts are always in the right place.

A dragon of middling height, Howl stands at around eleven feet at the shoulder; his slim build and partially-feathered features mark him as one of the Air. With sleek white scales and a thick golden mane, Howl is a rather colorful example of his species. His mane falls around blue-violet eyes that shift in hue from a dark, deep purple to a midnight blue to a color nearly magenta; iridescent and slanting, this gives him the appearance of calm, almost cold scrutiny. This mane flows down his neck and slips up the wings and over his shoulders, down his back, and along the top of his tail. Beneath, hard, metallic-gold plates can be found, visible beneath the fur where it recedes at either end. The White's wings are very large and long with the wing web tapering at each finger, giving them an irregularly splayed appearance. Along his wing bone and over the thin web lay birdlike feathers, glossy gold as his mane and fur. The coverts are white, clearly brighter than the white-striped and tipped webbing beneath.

His head is wedge-shaped and conclave, somewhat thicker than many dragons from Arrowhead's vast bejeweled depths. Two long horns, white in color, sprout from the back of his skull, and two smaller horns curve upwards from his forehead. He has a line of smaller spikes that curve behind his ears, all white, matching his long white talons. Small gold feathers that match his mane line the underside of his jaw.

He has golden markings that curl beneath his eyes in a somewhat tribal design. These also edge each plate on his shoulders and thighs, as well as a line spanning the middle of his wings. A brighter white than his creamy, off-white base curves upwards underneath his jaw, down his belly and across his plates, as well as to flow upwards along the line of his wings.

Perhaps I was a bit untruthful to you, my sweet; I did not go to the place of exaltations. I did not take my rightful place as heir... not yet, not now. Do you blame me? I could not bear it. I rule in name only, perhaps. My blood they would boil... do you understand? You must! You must understand this, my most darkest of secrets - I am not all who I claim to be!

Born of a unique tryst between a royalblooded demon and a diluteblood royal dragoness from Arrowhead, Howl holds blended blood like few others. Though the Arrowhead royals, of which he is one of the last, are considered impure and not nearly as strong as their cousins in Felnova, he is made all the stronger by his War demon blood. However, he has little idea of what his blood truly holds. He knows he is part demon, and it is a closely guarded secret from all whom he leads. Howl does not currently know he is the son of Raduko, the brother to the late Kirai, Lord of War, and thus the last existing one who holds any ties to the original War royal bloodline. He may never find out who and what he is, as none living know of Raduko's bastard dragon child.

Though his offensive capabilities are somewhat lacking, only skilled in traditional physical combat and hit-and-away flight maneuvers, Howl has the unusual ability to 'see' aura and detect the power and essence of someone's reiatsu. He may also discern the intent and sense malice through one's aura, and thus can tell friend and foe, spies included, very easily.

Aside from his aura vision, he may shift into a tall human man with refined features, deep golden hair cut at his shoulders, and dark violet eyes. In this form, he enjoys decorating himself with a variety of jewels and gemstones, his favorite being teardrop-shaped pendants and earrings. His fine garb reflects his colors in dragonform, creams and whites accented in gold.