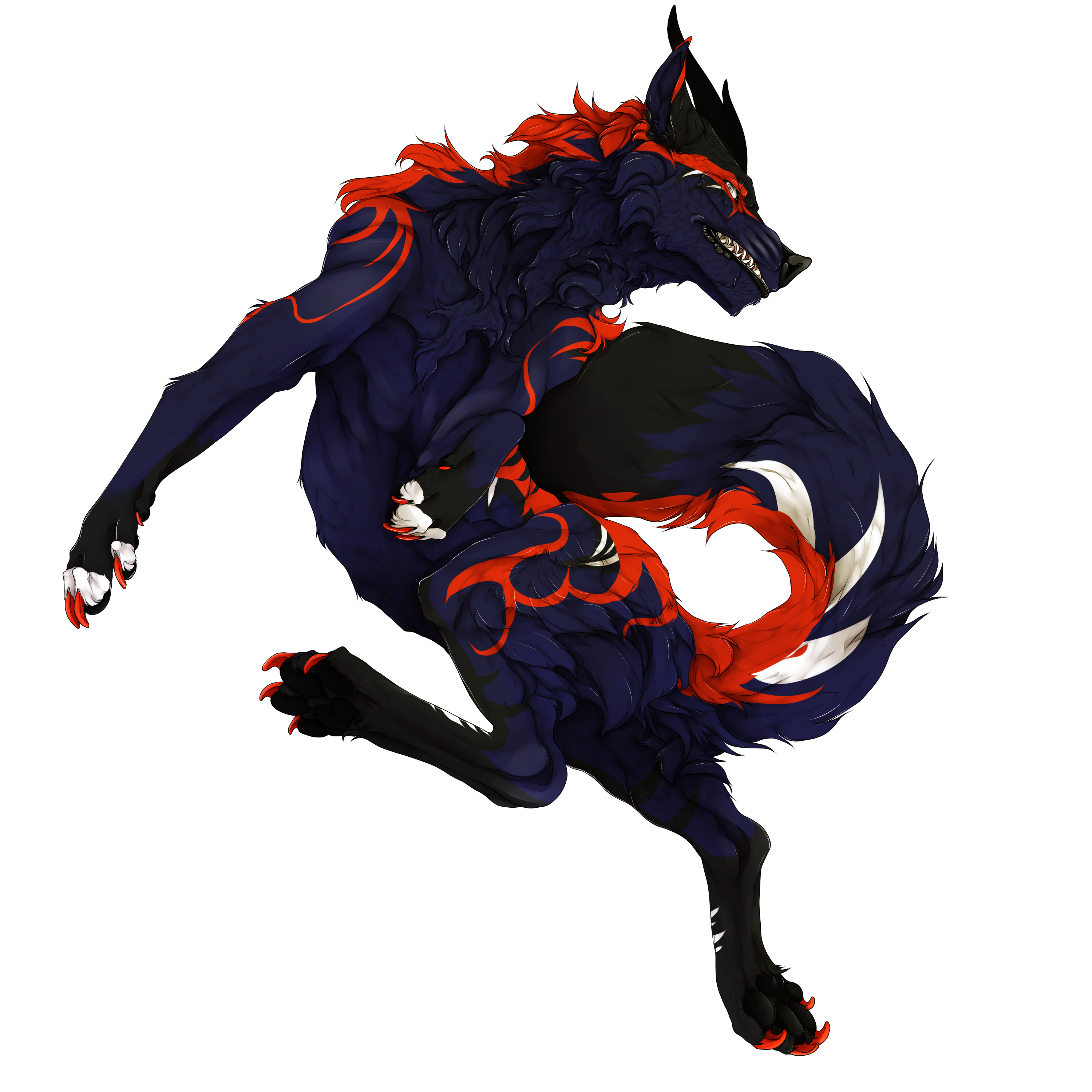 I see them everywhere. Ghosts, spirits; the souls of the damned and dead. I can't escape them. They're everywhere. I can speak with them, sometimes, but they never leave me alone...
* Kallo Stormbane
gender- male. species- Vystrian wolf/hellwolf (Death).

Hello; my name is Kallo. I'm the firstborn son of Ayunaye, a Vystrian wolf and former Vhela (alphess) of the Myr Pack. My father was Araneo, a Death hellwolf who died long ago. I have three siblings; Sirisial, Shakkor and Sombros, though Shakkor I know only by name. My great-grandfather is Cirrus, god of wolves. I live in the Myrlands with my birthpack, alongside my siblings as an Elite.

Once, I was called 'monster' and 'freak' by other wolves because I am part hellwolf. But now I am an accepted part of the pack, and I am learning the ways of our warriors, and hope one day to become Firehn like Thunderfang. My mother, Ayunaye, said that my father was a great wolf, one of the best, and that I should wear my horns with pride; but now I see the truth. He was a cunning, dark creature who stole my mother's heart and left her broken and lifeless when he died. He was the reason she disappeared, I'm sure of it.

I get along well with my surviving sister and brother; I would fight the world to protect them, and have watched them grow with me, into fine wolves themselves. Where we once played as puppies, we now hunt as pack brothers and sisters, alongside everyone else, as one. We work well as a team, though I have grown somewhat apart from them in my studies of the Elite in which I have, finally, been able to join.

My abilities revolve around the spirits of the dead. I can see ghosts - spirits and souls. I can catch their attention and call them, communicate with them, and send them back to the other side. I've begun training to phase in and out of things, walk through rocks and trees like air, but I'm not entirely good at it yet. The ghosts are my biggest allies, and the souls of the dead always come when I need them. I don't need any magic if I have them!

Cirrus granted me a drienar in the form of a white winter fox. His name is Ocel, and his eyes are the same shade of blue as my mother's fur. He is the best scout I know and can catch a mouse through feet and feet of snow. Some say that he is the spirit of my father, helping me from the afterlife. Even if that's the case (and I don't believe it is), we work well together, and I hope that he is by my side for all eternity.