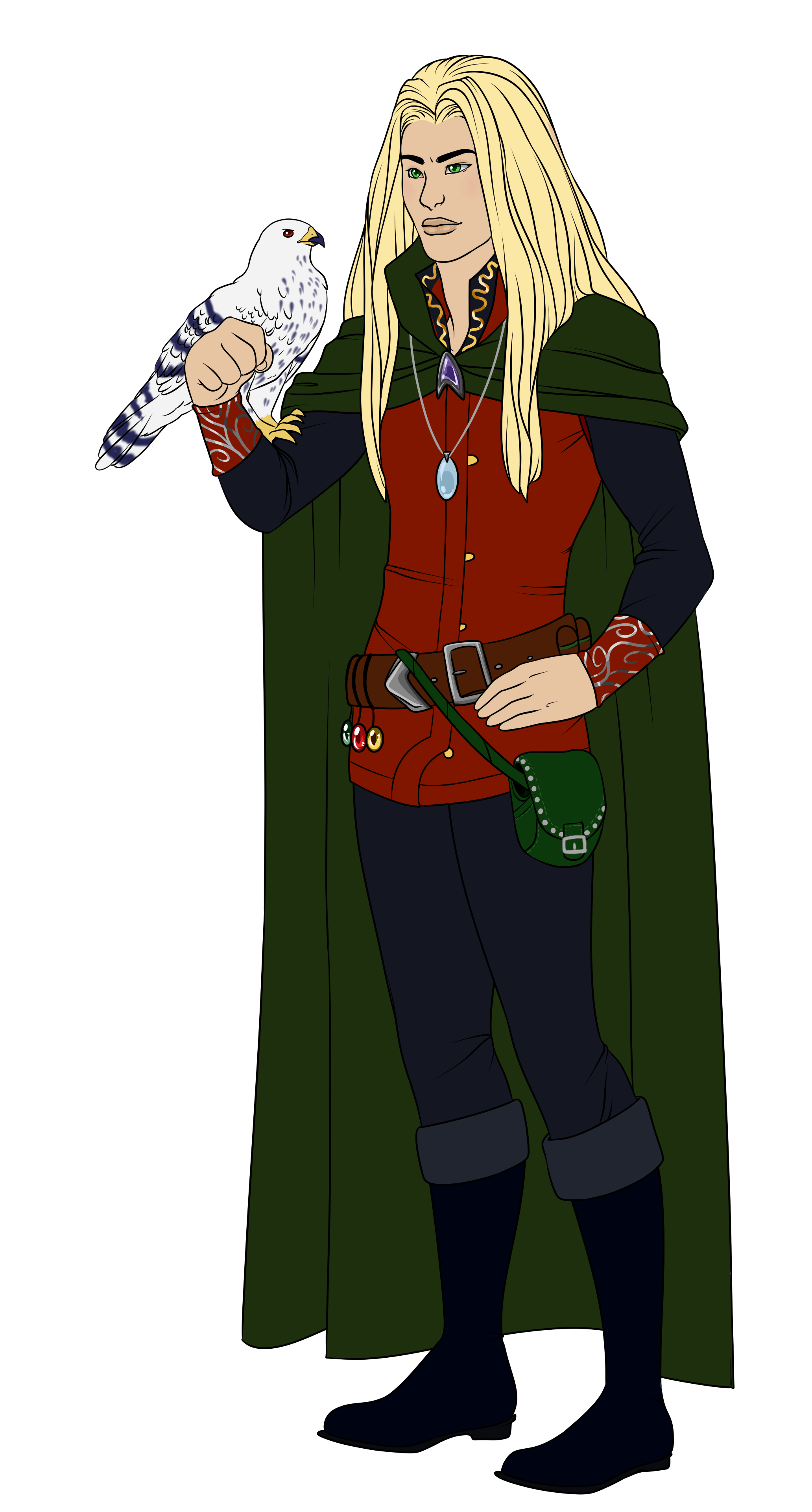 Kavylar is an elf of middling height, dressed with the greens and browns of an established ranger. Though not a ranger any longer, he still carries the training, and holds a ranger's quiet and watchful bearing.

He has long blond hair that falls down to the middle of his back, and his eyes are a bright green. Kavylar wears a pendant of silver with an opal at its center, and an assortment of other gemstones at his belt. Accompanying him always is a red-eyed, white-feathered gyrfalcon, whom is named Swilkor.

Born in a noble family, Kavylar was raised to have noble values and great loyalty to those his family were sworn to. Dedicated to serving the royal family of Heartwood City, his family was cast down to the slums when Lord Rathor was killed, and both of his parents disappeared soon after. Left in the care of an uncle, he trained to be a ranger, who soon found himself in the clutches of the esteemed Ruby Faction.

He is a regal individual with somewhat flawed morals; he believes that all individuals should be equal, and be led by only ones that they choose, ones that have the qualities necessary to become a leader. Thus, he respects and approves of Red's leadership, and above him Megiddo, though he will reject the arrogant leadership of most others. He is wholly dedicated to the members of the Ruby that he informs, and completely devoted to the brotherhood of which he has become.

Kavylar is a cunning and careful individual, very perceptive of everything around him. He often uses masks and alternate personas to get close to any whom he may see as a tool to further the Ruby's own ends. His favorite is that of a caring mentor, though very few ever actually touch him in such a way he would make any great sacrifice for their safety. For most, once their task is at an end, he abandons them to whatever fate they hold.

However, sometimes, his old nobleman's values will shine through, and he has momentary lapses of altruism. These altruistic moments are often small and short-lived, and generally end with him disappearing not long after the act.

Kavylar has no true elemental affinity, though his strange abilities allow him to 'steal' that of others, simply via touch. The amount of power stolen depends directly on how long physical contact is made, and how much energy he has at the time - most do not last more than a moment or two, though well-rested and with prolonged contact he may utilize a power for much longer.

Otherwise, he is rather skilled with a sword and a bow, though is slightly slower than an average elf. He tires easily, and cannot use his power-stealing abilities for more than a few hours at a time, lest he risk permanent damage.