another day, another hour, another life, another death ;; Once, I was just as carefree and happy as any other; I was a dark-haired child, son of an esteemed Ether and a silver-haired elfess. I had begun to discover the magic of shadow and my heritage when my mother was stolen away, her life taken by vengeful claws. Spirited away by a man who claimed to be king, I fell into a life of chains.

I was a slave for many years. As the numbers grew, so did the cruelty of my treatment; in the great fortress under the mountain was I kept, where no-one and nothing knew my name. At last, on the verge of death and seeking to escape the only thing I knew - I was rescued by my father, who was in turn trapped in his own prison; one of his own making. I learned of what I was and what I could become, and I fled. I ran until I could run no more, then returned to find nothing, nothing at all.

That time is in the past. My father is gone, and my voice has been taken. But... what's next to come? Is dawn upon the horizon?

Look skyward. You never know until you try.

As an elven hybrid, Leithan retains a young appearance for a very long time; and with his shadowbeast blood, even longer. Standing just a few inches under six feet, he has shoulder-length white hair and dark blue eyes, and usually wears a black tunic and breeches with dark leather boots. He wears a small pendant formed of one half of a dragon jaden, rumored to be the piece that fits his mother's' and thus very important to him. He also likes to wear bracers or wrist guards, sometimes even slim bands of black cloth or dark leather. When the weather is bad, he'll wear a blue or black cloak with a hood that conceals his face.

In his shadowbeast form, he appears as a feathered lizard with malformed semi-hybrid wings, the edges of hooked claws and thin, tattered silver webbing just poking out from beneath ragged feathers. His plumage and scales are a medium shade of grey with deeper black markings around the claws and though he wears the same garb as normal, most is nearly shredded to ribbons on the shift. As such, he only uses this form when he's either gravely injured or in another dire situation; it is also very painful to change into.

Before the settling of his curse, Leithan was cynical and quick to anger, though more often quiet and brooding. Though he may be kind at times, it is rare and he tries to hide it; much preferring to act cold and aloof rather than have people begin to depend on him. As such, he hates depending on anyone other than himself, and fears making friends because he believes in the end, he will only lose them. He's stern and quiet, often alone and lost in thought. He sees many things as punishment instead of pleasure and though he excels at a great deal, he always thinks himself inadequate in many things he does.

Since his Curse of Silence, hope is fragile and his moments of kindness are ever rarer. He's able to communicate with a special crystalline tablet the mages of Godshome gave him - but the fact he can't speak at all frustrates him to no end. He often forgets he can't speak in times of emotional outburst, and will shout in silence until he realizes he's made no sound.

Among friends, he is a bit more relaxed, though still wary and tense. If a friend is threatened or in danger, he doesn't hesitate to do everything in his power to protect them, but after the fact acts bitter and would claim it was on impulse rather than any moral reasoning. When around those he dislikes or known enemies, he is always on edge.

Being part shadowbeast, he retains the ability to control shadows to some extent, and has mastered the use of effective energy blasts using dark magic. While the more complicated uses of shadow magic elude him, he's proficient with the use of knives - usually two curved daggers with a circular hand guard around each handle - as well as a slender katana-like sword.

Recently, he's begun to have visions of the future; though this Sight is incomplete, he may catch glimpses of events far in the future that disorient him when they come to pass. 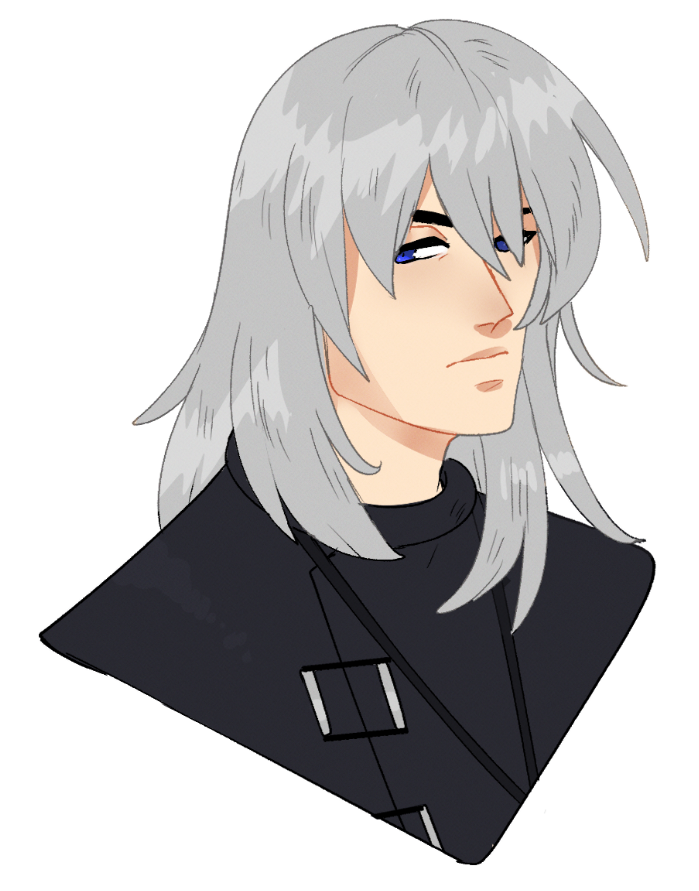