Blessed be the Light

Maeya is the daughter of a stallion named Aiventus Etienne,
a horse well known for his bravery and heroism; he earned the name
in which she inherited by sacrificing his life to save his herd. Caught in
a massive storm, he found shelter for the horses of the equus of the Duscae,
and a passing pegasi herd that had already suffered heavy losses.

Deep within the assault of weather had been a storm elemental driven to madness, who Aiventus engaged in combat, and eventually slew. He was given the surname Etienne, to pass to his daughter, born not a week after he had succumbed to his great injuries. Thus, the filly Maeya inherited the title of honor, and holds her father's memory forevermore.

Unlike her stern mother and noble father, Maeya has no wish nor desire to learn the ways of war. She is a young mare who enjoys the frivolities of life; flighty and whimsical, she has never been seen angry or disappointed. She loves to cheer others up and believes even the darkest souls can be won over with enough kindness and sincerity. In the eyes of the rest of her herd, she is seen as eccentric and almost too outgoing, not knowing of the dangers of the outside world.

As sheltered as she has been, protected by her mother as the only piece of her father left, she's never experienced the harsh realities of the world. Though her mother is very strict, nothing deters her from what she believes, and she is a shining beacon of hope to all those around her. The love in her heart is very great indeed.

Lightly built with a delicate form, Maeya is a palomino filly with pale tobiano markings. Her white patterns are nearly symmetrical on either side, mimicking her mother's mirror swirls with her father's chaotic white. Along her face and on each leg shades slightly darker, and have subtle stripes. Her muzzle is cased in velvet dark brown that's nearly black, and her mane and tail hair are a creamy off-white slightly darker than her marks. Her eyes are a soft blue with unusually-shaped pupils: vertical, and slitted like a cat's.

She inherited her father's iridescent scales in blues, golds, and pale pinks, growing along her face, back, the top of her leonine tail, and on her forelegs. A pair of branching horns in the same colors sprouts from between her ears; one length juts out and back, where the other curls forward and down, each thin and delicate. Each hoof is cloven, and small fangs protrude from her lips where a traditional horse's wolf teeth would be. Maeya has a unique tail, as well; it is a mix of her mother's whiplike, tufted tail and her father's luxurious hair. It is long and thin with fur that grows from both underneath and on top, the longest at the tip.

Maeya's abilities have only recently begun to surface, and she has not learned how to control them yet. However, she can summon light-based copies of her scales and send them to swirl around her in a shimmering cyclone of magic. Someday, she'll be able to send them out at an opponent like little shards of sharp, burning light. 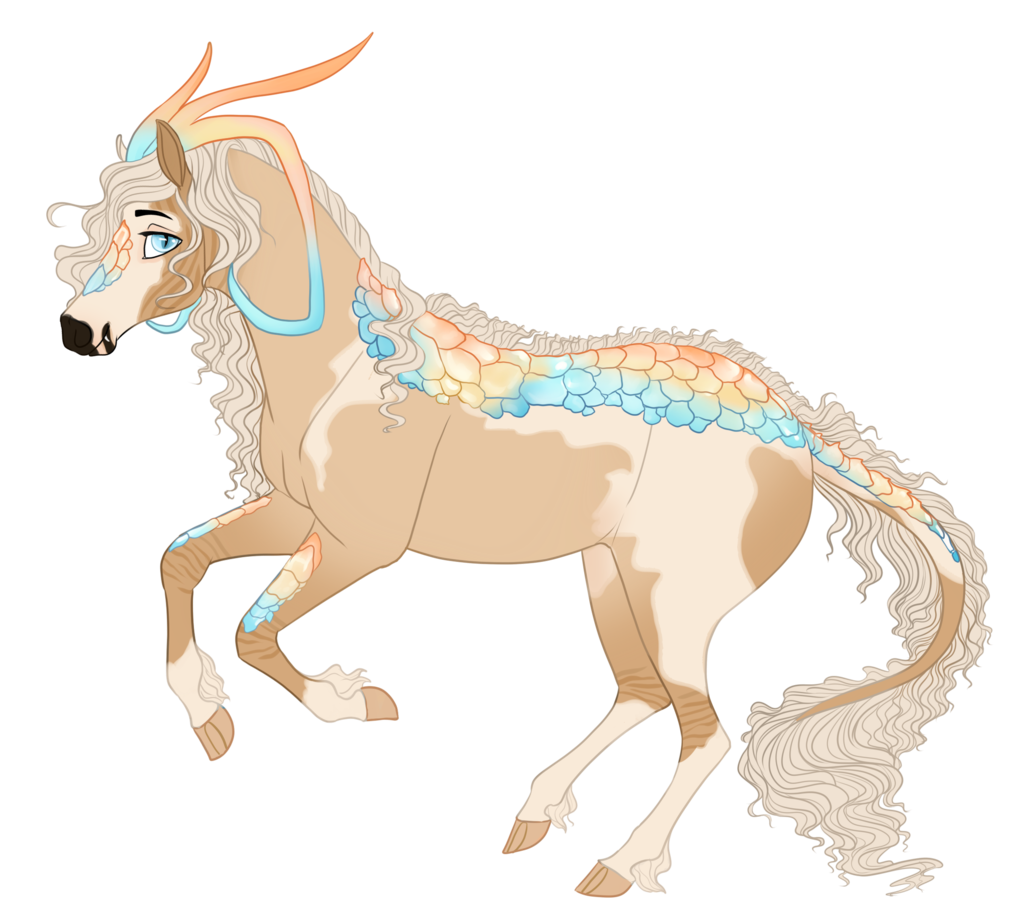