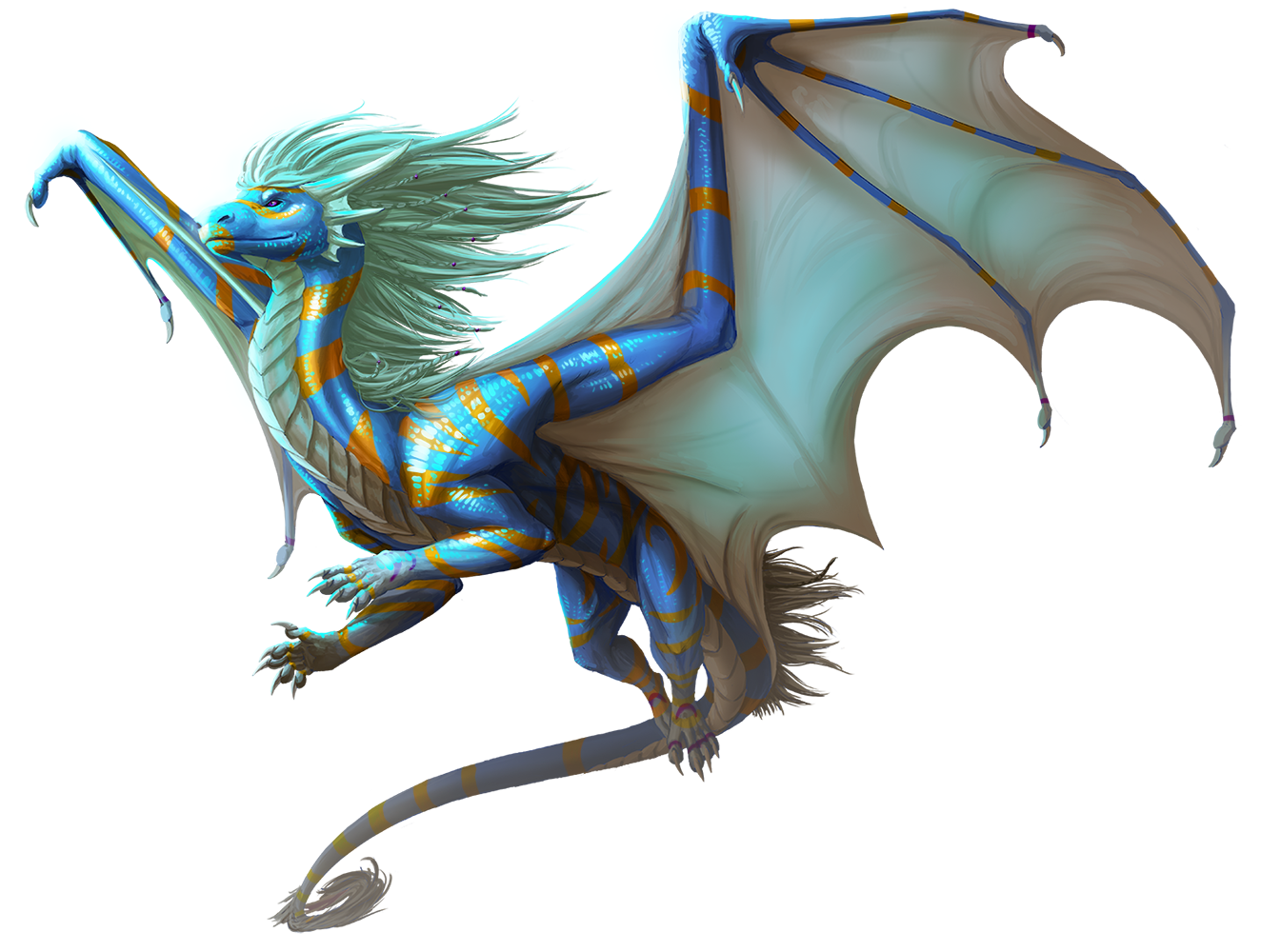 ◆ I always said I'd stand by your side. That I'd never leave you; I'd always protect you. But what happens now? I couldn't keep my promise. I failed, and let you die. You were my entire world... I don't know what to do. I don't know where to go. How am I supposed to be a leader when I can't even lead myself? 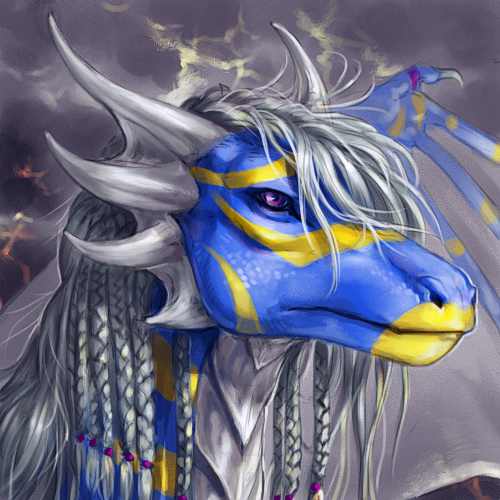 Nagase is a young adult dragoness, scales a deep blue streaked with thick stripes of metallic gold. Her horns, mane, wing webbing and belly plates are all a glimmering shade of silver, and her deep blue scales are iridescent, something she takes great pride in. As she's aged, she's begun to develop violet markings like her mother, which she assumes will grow over time. A fact she isn't entirely pleased with.

Gracing her face are three combined, frill-like horns akin to her mother's, with her ear-hole embedded within the topmost horn. Her mane falls over her slender muzzle and trails down her back to a point along her whiplike tail; some points also seem to darken with age. As part of her mane grows a bit faster than the rest, she's taken to braiding it near her face, and tying it with slim wire or cord. Each scaled finger is also tipped with a birdlike talon, the same silver as her horns.

She isn't one very big on accessories, though she does like to hang feathers from her horns and wears a special white-scale pendant - one of Solan's. This she holds most dear over anything, both as a possession and reminder. She's said that it serves to remind her to be strong in times of darkness, and draws strength from it both mentally and physically. She also likes to wear a small bracelet off and on.

When pushed to the limit, Nagase has been known to take a 'Dark' form; rumor has it that she, being a royalblood, has a Light form as well, but it's never truly appeared. Her scales turn darker, to a deep indigo, and her markings shift to a very dark red, their innards glowing brightly white. Her eyes turn to fallen stars; their color evaporates and begin to glow intensely, blazing as brightly as the cosmos. Her wings become more jagged and her horns darken slightly; her mane and belly scutes turn to a pitch black. The trinket on her horn splits into three for unknown reasons, and spikes sprout along her wrists, tail base, wing's leading edge and the tip of her long tail.

She is incredibly loyal to very few; most notably was a demon named Solan, whom she called her adoptive elder brother. Though she has grown somewhat bitter in the years after his passing, she's still unsurpassingly stubborn, and will have her way no matter what. Despite this, she isn't afraid to admit that she's wrong to those she cares about; even if it is reluctantly. To friends, she isn't as gentle as some would like her to be, but she's outgoing to those she trusts. At times, she has a streak of stubborn meanness to her - but her compassion forces guilt to settle later, an she tries everything in her power to forgive and be forgiven.

A demon without the blood, Dark Nagase has no compassion or guilt; only cruel malice, hatred and anger. Often, she takes a mocking approach to all who face her, tearing at their weaknesses both physically and verbally. She never regrets any of her actions, and nothing said can stop her; until her lighter side takes over once again and puts an end to her madness.

Nagase has strong reiatsu capabilities, but seemingly no elemental ability at all. Her pure-white aura, linked to the Ethers, manifests in a white fire. Generally, this forms around her paws and tail when in use, as well as being a type of energy breath-weapon used like a firedrake's traditional flame. She can use it to protect, to purify and cleanse, or to burn like true fire. Due to the powers held in Solan's scale, she may infuse it with his reiatsu as well; it grows darker and holds sparks of black and sky blue, corrupted and tainted as its offensive capability doubles. However, using either drains her to a great extent, and she cannot maintain offensive blasts or focused healing for long at all.

In addition to this, she may also utilize it for healing herself and others, as well as to light the way in dark places. There is something else that Solan gave her, long ago - she has the black blood of the Bloodreign line; his instantaneous ability to heal any wound with broken skin, though she can't control it to the extent he could. Broken bones cannot be healed with the blood unless there is an outside wound, and using it too much causes frailness and physical weakness until she's had time to rest.

As a complete opposite, Dark Nagase still is able to wield the white fire; though she enjoys tainting it with her own malice, and thus sometimes it can appear silver in bright light instead of pure white. She loves to use her talons and teeth more than any magic, though she is unable to use the black blood as her counterpart can. When injured, her wounds don't heal as quickly, and her blood appears as normal red.

The below have been done by myself (the first is a collab!); some are refs, others are pictures and paintings.

These have been done by other lovely people! <3