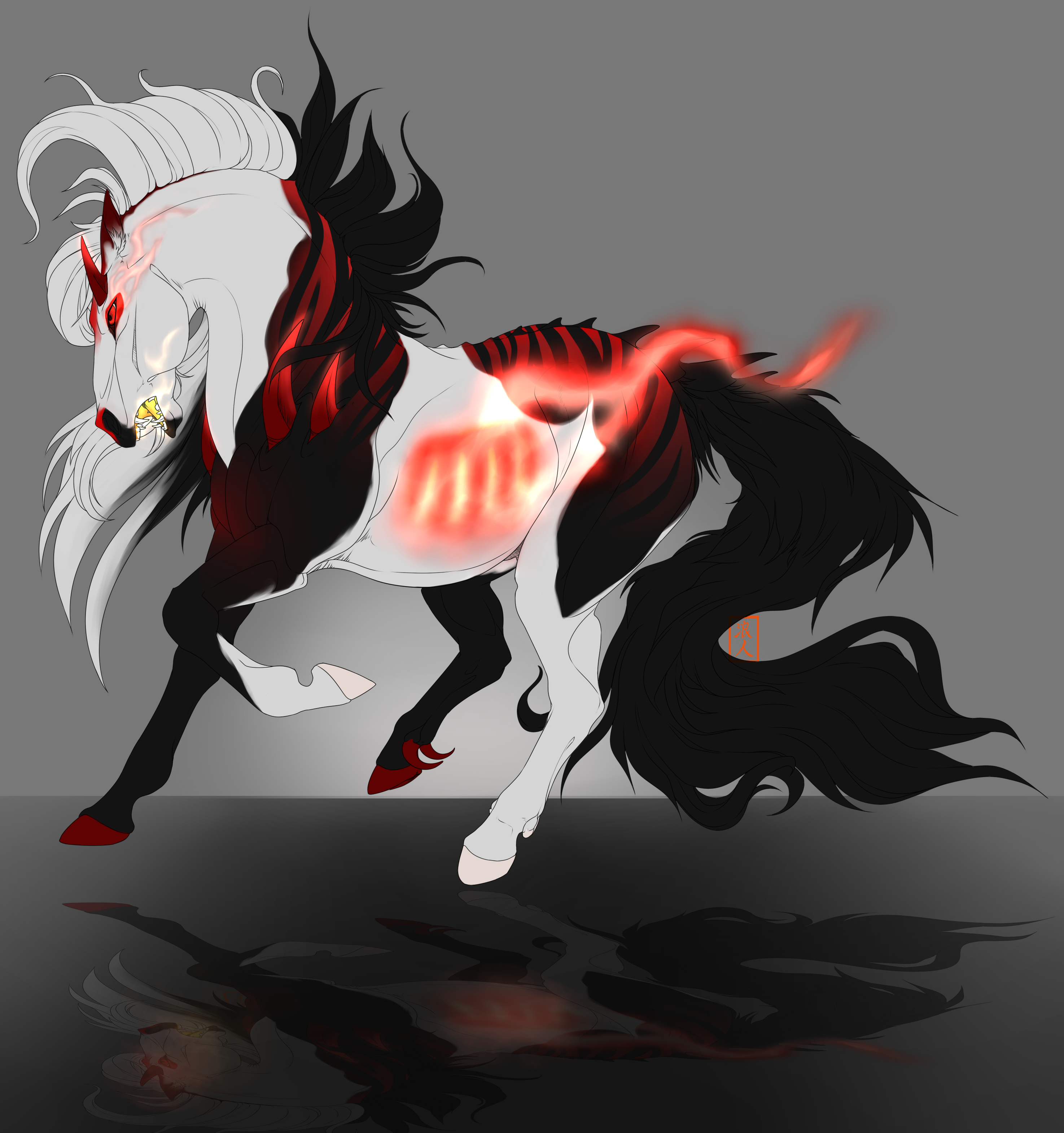 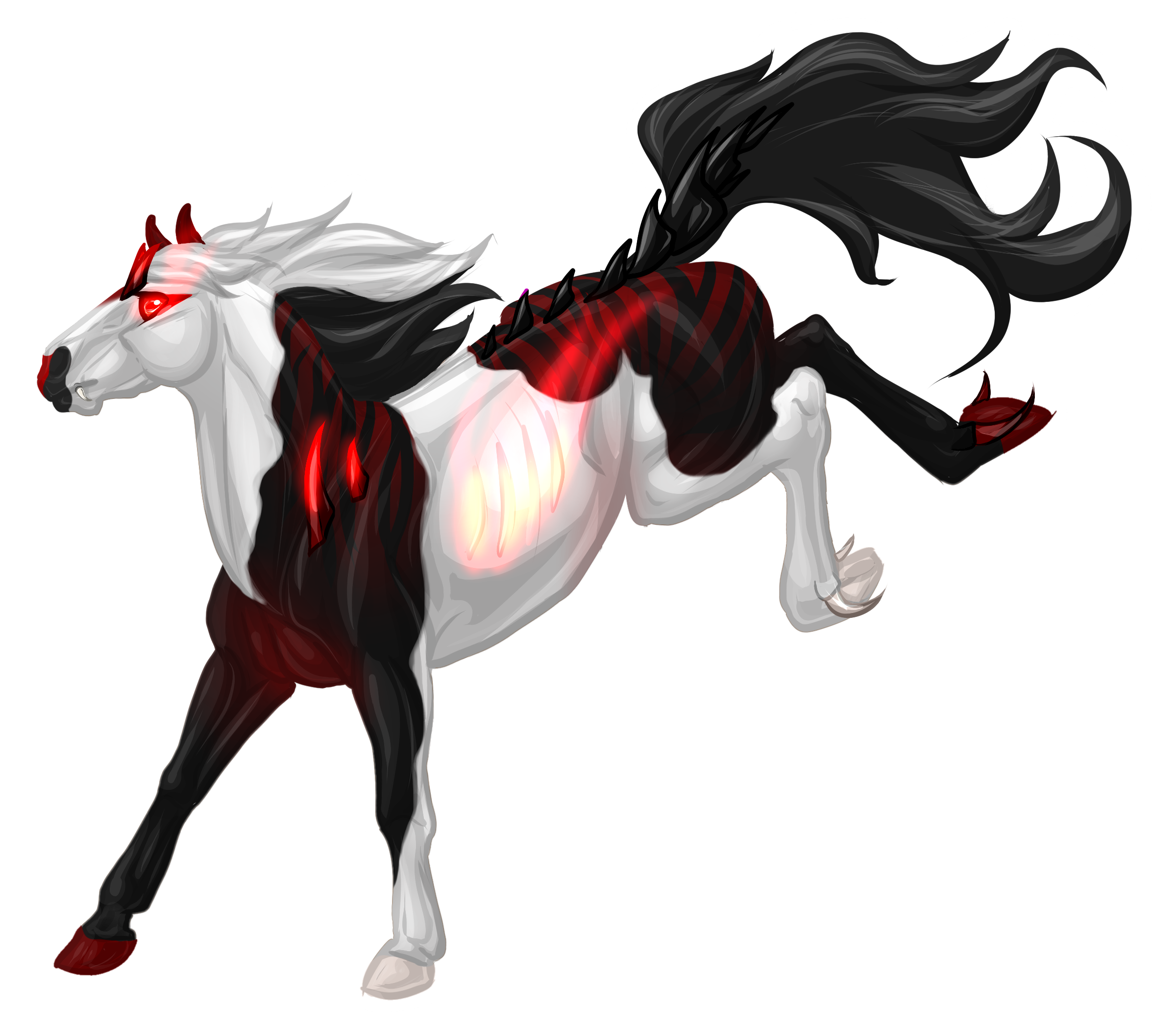 Once an equus named Jiunu, Oblivion is now a Demonic Reaper of some renown, a weapon in the Death Kingdom's arsenal. He is nearly seventeen hands tall (five and a half feet at the withers) and built much like a quarter horse/mustang in basic conformation. However, that is where the resemblance ends - for where he was a teal-coated pinto before his change, he is now much taller than he once was, and his aqua colors have shifted to deep maroons and startling crimsons.

Oblivion's white markings are asymmetrical. They paint his left side's neck, face, and barrel in splashes of silver-white that extend all the way down his left hind leg, with a sock on his left foreleg. On his right, there are very few white markings - only that of his neck, face, and part of his back, little else. He sports red shading to black coloration everywhere else, with broad stripes cutting vertically through this to blend with his undersides below. A bold red stripe flows from the back of his eye and on a dark patch that covers much of his muzzle, disappearing over his nose to reappear at his poll, between his ears, and down half his neck.The tips of his ears are bloody maroon, both inner and outer. His long mane appears to be half and half; the foremost part is the same silvery white as his markings, while the thick locks that touch his darker portions is pitch black. His tail, like the latter half of his mane, is entirely black.

As a testament to what he now is, Oblivion has several features that grew when he became soul-bonded to a Reaper. Two small, sharp horns protrude from above his eyes, and he has sharp, ripping fangs that often peek over his jaws even when his mouth is fully closed. On each back hoof, two raptor-like claws extend, matching the color of the hoof they lay above - maroon on the right, and cream on the left. Long, sharp red spikes protrude from each shoulder, and black spikes that transition into plates grow from his back to the top of his tail. Lastly, his sides glow with vents that his reiatsu escapes from, fiery at its heart and shading to crimson as it fades; this is repeated in his mouth and any wounds he receives. His eyes, similarly glowing with his aura, are red. 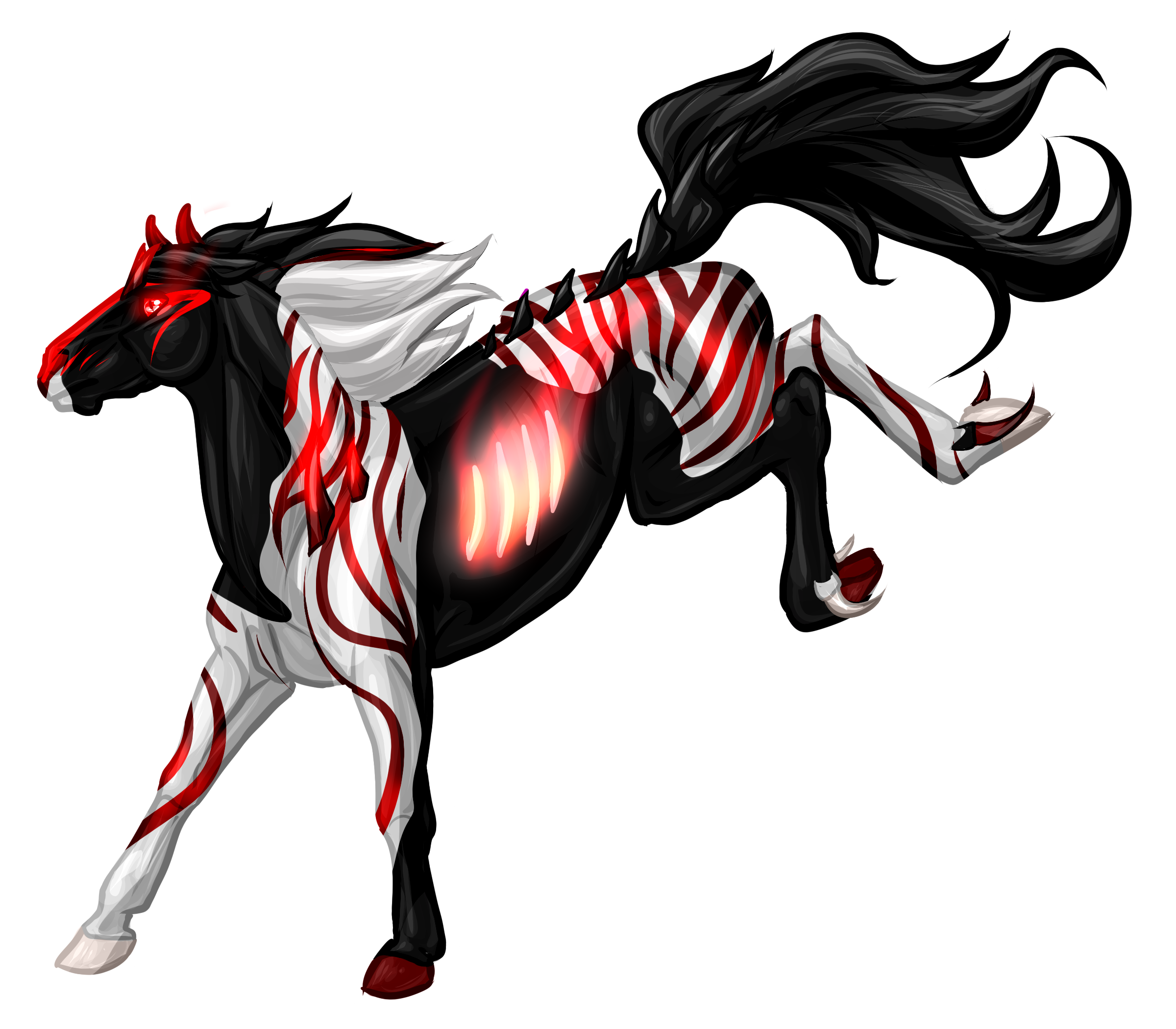 When he is pushed too far and allows his bonded demon, the Reaper Ryujin, to take over, most of his white and black markings reverse in color. His red markings grow and twist farther, bolder now, and seem to glow with their own light. He becomes even larger, standing around eighteen hands, and his horns, fangs, claws and spikes grow lethally sharp.

In this form, if his markings are looked at for long enough, they appear to move and swirl nearly imperceptibly; this effect grows stronger the angrier Oblivion becomes. His scarlet markings may also glow with their own inner light, and the vents on his barrel may elongate and open wider.

He also has the capability of moving his horns and spikes forward and back in this shape, as well as opening his fanged maw much wider than it is normally able to.

Ryujin himself was a tall, handsome demon with pale skin that was near white, long black hair, and large, scarlet horns that sprouted from his head just over his fiery eyes. He was known for a maniacal grin he'd wear in battle, and his unusual tendency to charge into an enemy without armor and in nothing but a simple black tunic. It's this garb he wears when fully released, with no jewelry and no other accessories.

In addition to his horns, he sports a mouth full of sharp teeth with fangs that often show even when his mouth is closed; his fingertips are similarly tipped in long talons, and his feet have broad claws. Both his hands and feet, as well as a good portion of his lower arms, calves, and back, are sheathed in black scales.

Oblivion was once a kind and quiet equus, living as a protector of a small herd located in northern Alubria, in Vystriana. However, much has changed since those much lighter times - and now, he is focused on little more than whatever prey is next to fall to his crushing fangs. As a more recent Demonic Reaper, his original personality is heavily buried, and isn't likely to resurface anytime soon.

Filled with bloodlust and battlerage, Oblivion lives from one kill to the next. If something he deems prey is within his sights, he will not stop until it's caught and killed. He ignores injuries to himself in the chase and fight, and attacks with savagery unaffected by any moral or ethics. He may not even stop at the word of his Lord.

There are, however, two that may reach him and calm him down - one is his sister, the ghost Valhalla, who was a Demonic Reaper before him before she was slain. The second is much less likely to intervene, but can when he must: his soulbound demon, Ryujin.

If and when he is of the right mind, calm enough for rational thought, he is grumpy and irritable, impatient and somewhat nervous. He detests anyone that calls him anything but Oblivion or Vion, especially his old name or the name of his demon. Most times, he'll opt to fall asleep and ignore the world than actively participate in it until the protective bloodlust returns in full.

Angry at the World

As a former Reaper, a soul-stealing warrior-assassin in the Kingdom of Death's military, Ryujin was merciless, cunning, and devastatingly good at what he did. Targets didn't matter to him - no matter the age, race, or innocence of whatever he was pointed at, he would kill it so long as it pleased his Lord. Though he served the majority of his short life under Lord Razor, and died just before Icarath came to power, he respects the new Lord even if his worldview is somewhat unsettling in his eyes.

He was - and is - an adrenaline junky. It's thought that its his passive influence that makes Oblivion so hard to control when prey is within reach, and his stubbornness that makes it so hard to stop him. However, Ryujin isn't completely without a conscience. At times when he feels enough damage has been done, he will soothe the beast, and leave what few survivors are left alive.

With the abilities given to him by becoming a Demonic Reaper, Oblivion is tied in his need to devour souls for sustenance and energy. The more powerful the soul, the longer he can survive; but if he goes even a few days without killing, he begins to suffer the mind-altering hunger-madness that comes from spiritual starvation. If he goes a prolonged period of time without a decent kill, he will become weaker and weaker until Ryujin takes over in a violent rage until either they die or they are able to take enough souls to curb the madness once more. As an aside, Oblivion is also only able to devour the souls of those he has killed and cannot eat living spirits or spiritual energy as many Demonic Reapers can.

When at full strength, he is able to use an affinity for fire - but in the unusual form of flames and scarlet lightning. This seeming electricity will burn and spark more fire when it touches anything flammable, and cannot be used as an energy source or to shock anything as true lightning can. He can also breathe this fire as well as utilize it around him, though pulling from existing sources creates less of an energy drain and is preferable when he is of a more... rational mind.

When in his inverted Reaper's form, Oblivion is much stronger but his movements become jagged and sharp, losing focus and fluidity. He gains the ability to open his mouth very wide and to move his horns, spikes and claws beyond their usual range of motion. He is also able to strike at the soul itself, bypassing physical barriers, with his fire-lightning. He does not, however, know how to use his reiatsu in this form, despite its prevalence around him.

Oblivion also has the ability to shift, for very brief periods of time, into his bonded demon's shape. Though it's said he already had a shifting gene, the latent gene was taken by Ryujin and is used to be free in his own body and away from Oblivion's direct influence. However, he is able to do none of his former abilities and must utilize the equus' fire-lightning instead, along with any physical weapons he may pick up and use along the way. It's rare that he's able to hold this form for longer than a few hours. Less when in battle.

Song of the Righteous 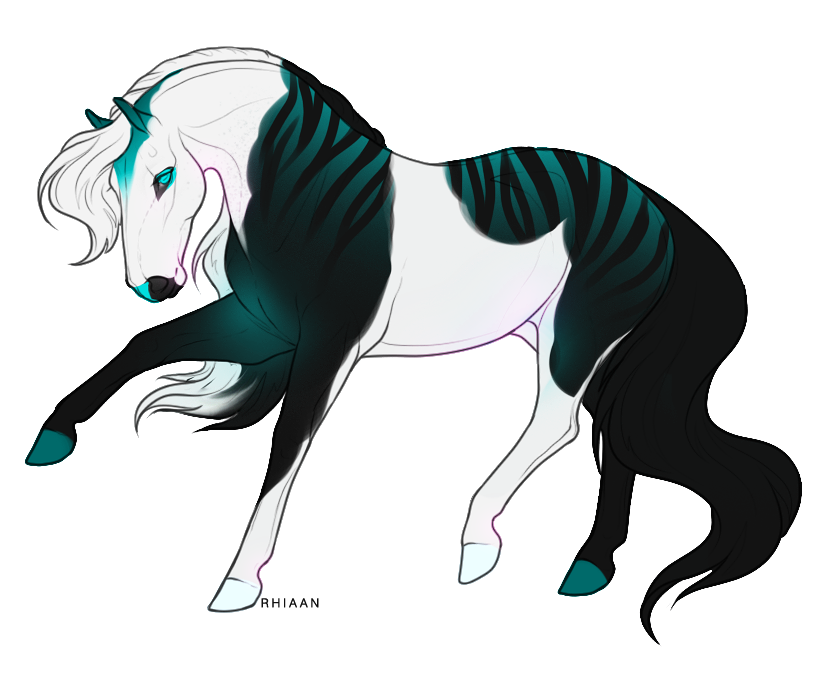 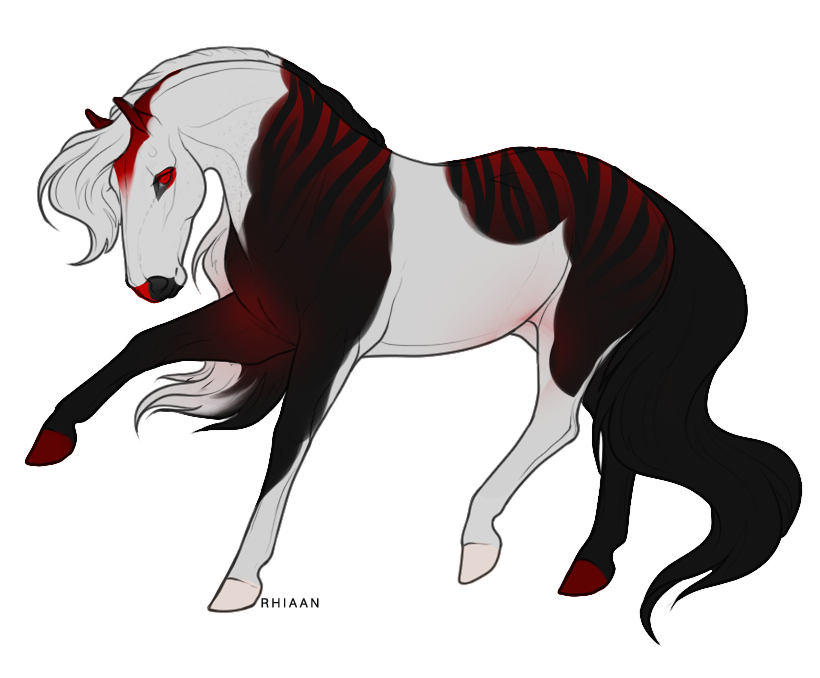 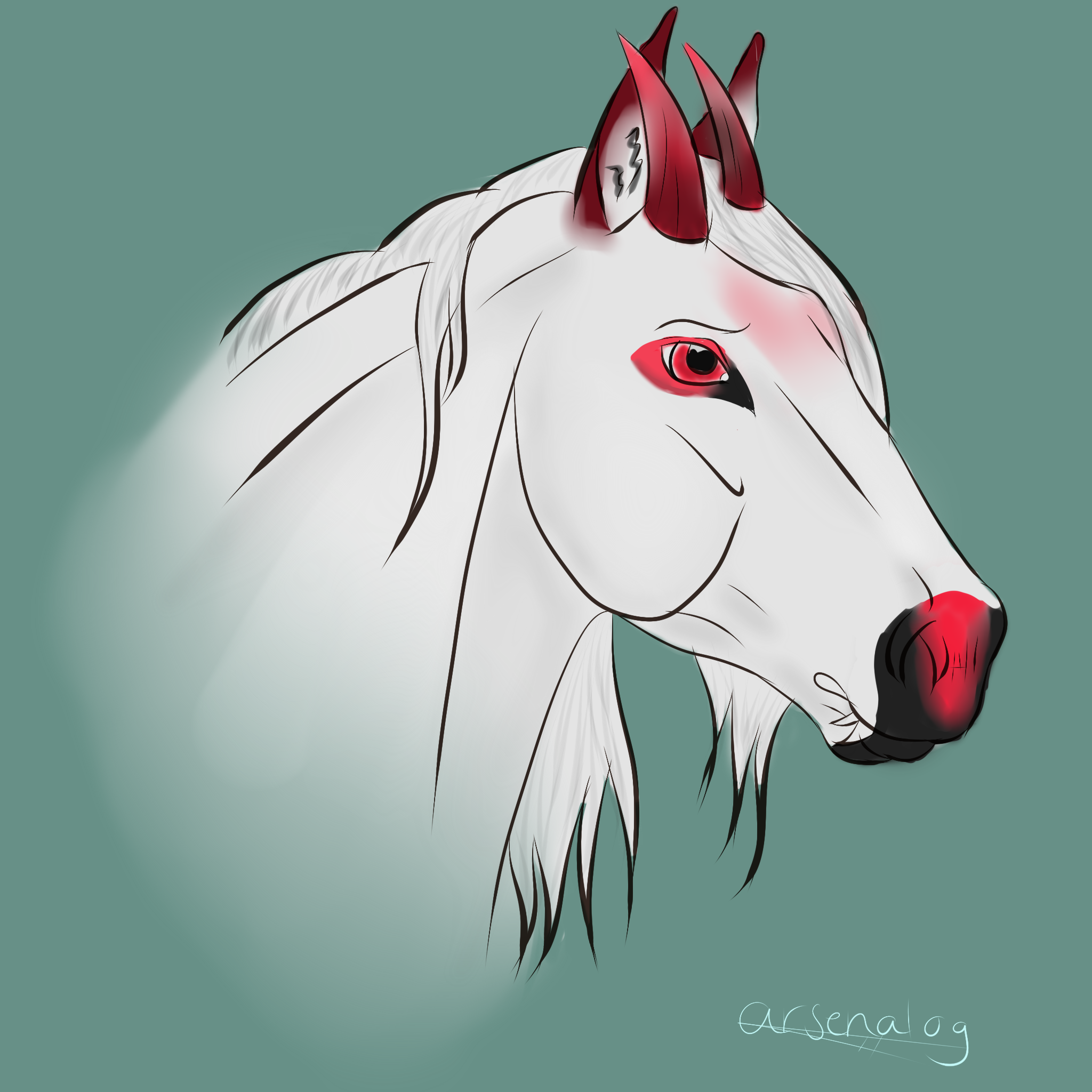 * pictured above is a gallery of images of Oblivion
the first is his appearance before he became a Demonic Reaper; the second is his natural Reaper state without horns, spikes, claws or fangs!
Coding and character (c) me/Verridith! Art (c) Kenaki-Naki (dA), Rhiaan (dA), myself, Xikhara (dA), Talon (BTACD), and Arsenal09 (dA)!
Original design by Rhiaan. <3