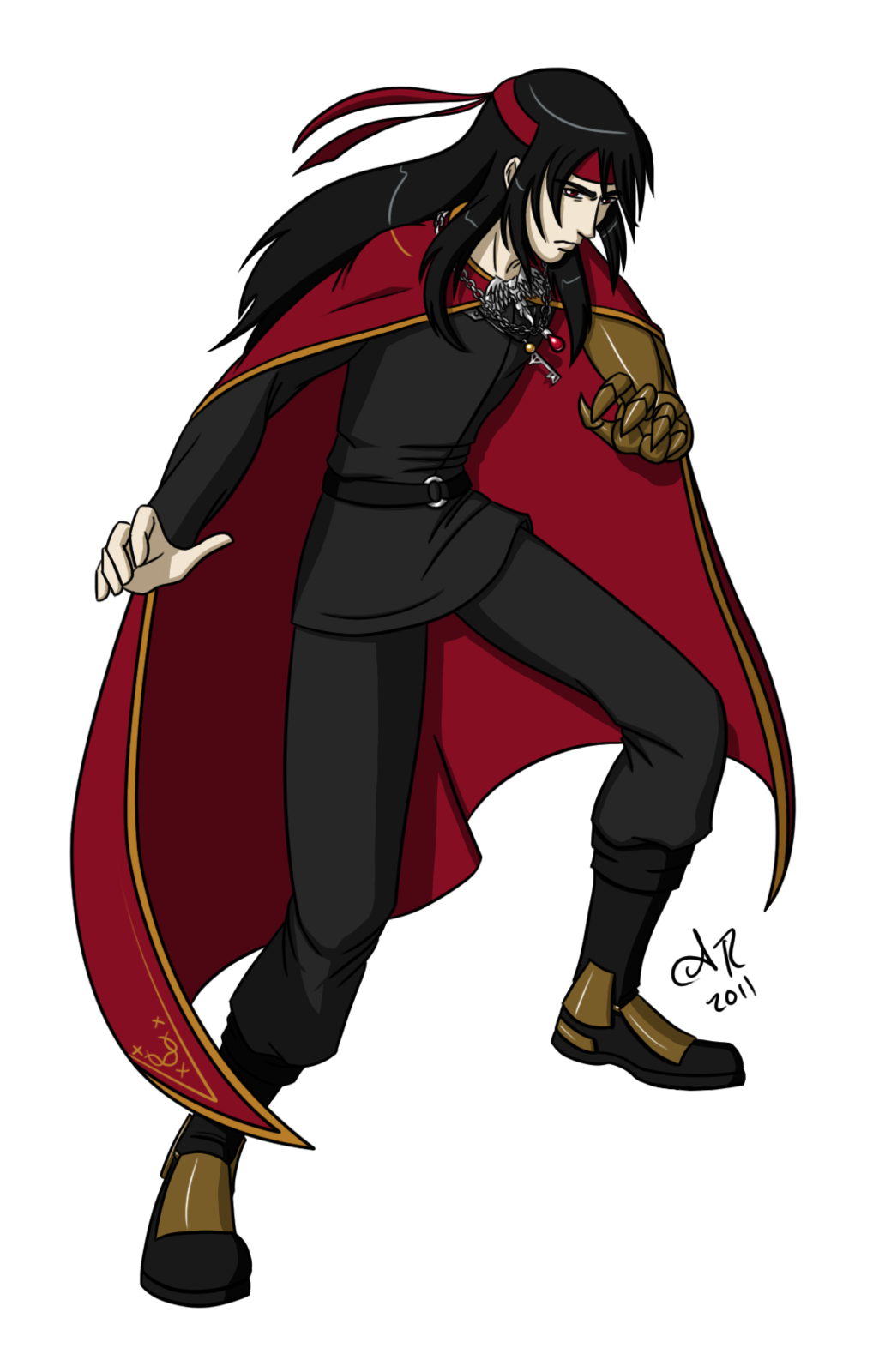 Ram'r
Wolfheart
what does it take to show you the way? *

Ram'r is quiet and soft-spoken, often choosing to remain silent where others would offer their opinions. Content to watch and wait, he was generally passive about events happening in the world until coming across a young human child named Shyun. Shyun taught him there is more to life than morning to evening and dusk to dawn - that there could be hope after darkness, and a road to follow through. While he will still hesitate and often choose to not act if something concerns others, he will readily help those in need and even sacrifice his own life for any he considers a friend. Tolerant and gentle, he likes the company of animals more than people, and is quite good with children.

In regards to his family, Kaiba is everything. Even after his former love, Amory, shattered their pairbond and he escaped into exile, his son has remained a true pillar of strength. Any danger posed he reacts to swiftly and without hesitation, sometimes violently, to ensure little Kai's safety at all costs. Though fearful of this anger - in case he accidentally releases Kritou - he will use it to empower his abilities and eliminate the danger with all haste. Somewhat insecure and worrisome, his fear of both the 'monster' within and of losing his only son has driven him apart from most of civilization, and he avoids crowds and gatherings whenever possible. Despite many reassurances, he believes that the Breaking was Amory finally seeing the shadow of Kritou instead of his own; something he will carry with him always, until the end of his days. He considers himself a wanderer and a rogue. True to this nature, he's taken to wandering once again with his son, perhaps to find safety - perhaps because he can't stop running, can't turn and face the past.

Since the Break, his mind hasn't been the same. Ram'r often wakes from nightmares involving some part of his past, nightmares he had banished before; some now much worse...others strong enough to plant the feeling deep enough to last the entire day. He can't abide music for very long, and the sight or mention of a phoenix brings instant, painful silence. Kaiba is usually able to draw him out of these trances, and has gotten quite good at keeping his father distracted. They are two halves of a whole; currently, one without the other could not exist.

He has long, thick black hair that falls a little farther than the middle of his back, scarlet eyes and a narrow-but-muscular build. He has a black marking, the tattoo of the wolven Anima, of a tailed moon with three stars on his lower back. One arm - his left - is made completely of plated bronze, much akin to a robotic limb, though put together and built with magic so that he may use it like a normal arm. His original arm was lost in a battle with an ogre protecting one he once loved, up in the Darklights' highest peaks.

His normal attire consists of a black tunic or black leather armor with breeches of the same color, similarly armored; he wears a few steel plates that protect his collarbone, over which he wears a red cloak decorated with gold at the hem. He wears dark boots with metal plates protecting the foot and ankle, two small spurs on each side much like talons. Ram'r also sometimes dons a red headbands to pull his hair away from his eyes, the ends of which fall about a foot down his back. A stylized brooch in the shape of a snarling winged wolf fastens it, underneath which he wears the Phoenix Tear and the Rebirth Flame: a ruby-like gem that glows when the holder of its counterpart is injured or dying, and loses its color when they die; and a small silver key, its top encased in a fiery Soulgem.The Rebirth Flame was once something powerful - but now it serves a different purpose, and its uniting with Emery's Soulgem spells more mysteries than answers.

Sometimes, he will wear a black jacket threaded with gold and a white tunic with black steel shoulderplates, though he'll rarely use it. He also has a black rendition of his red cloak and bandanna decorated with silver instead of gold.

In his demi-form, he has his wolf's ears, tail, fangs and claws - they appear and disappear at will, seemingly solidifying and evaporating in the form of black smoke. His tail shares the markings of his full form, and his eyes change very slightly to appear lupine if looked at closely. His claws are little darker than his human fingernails.

In his wolf form, Ram'r stands somewhat taller than the average Vystrian wolf. He is deep black in color with dark red markings on his nose and above his eyes, tipping the fur at his nape an the top of his bushy tail. His eyes take on an almost iridescent hue, glinting purple in the darkest night. His left foreleg and forepaw is made of solid bronze; plated like his human form's, it is a bit longer and tipped with five sharp, dragonlike talons. The shape is more wolf than his normal metal limb, as the magic is strong enough to change shape slightly, though it can't hold a complete retransformation. 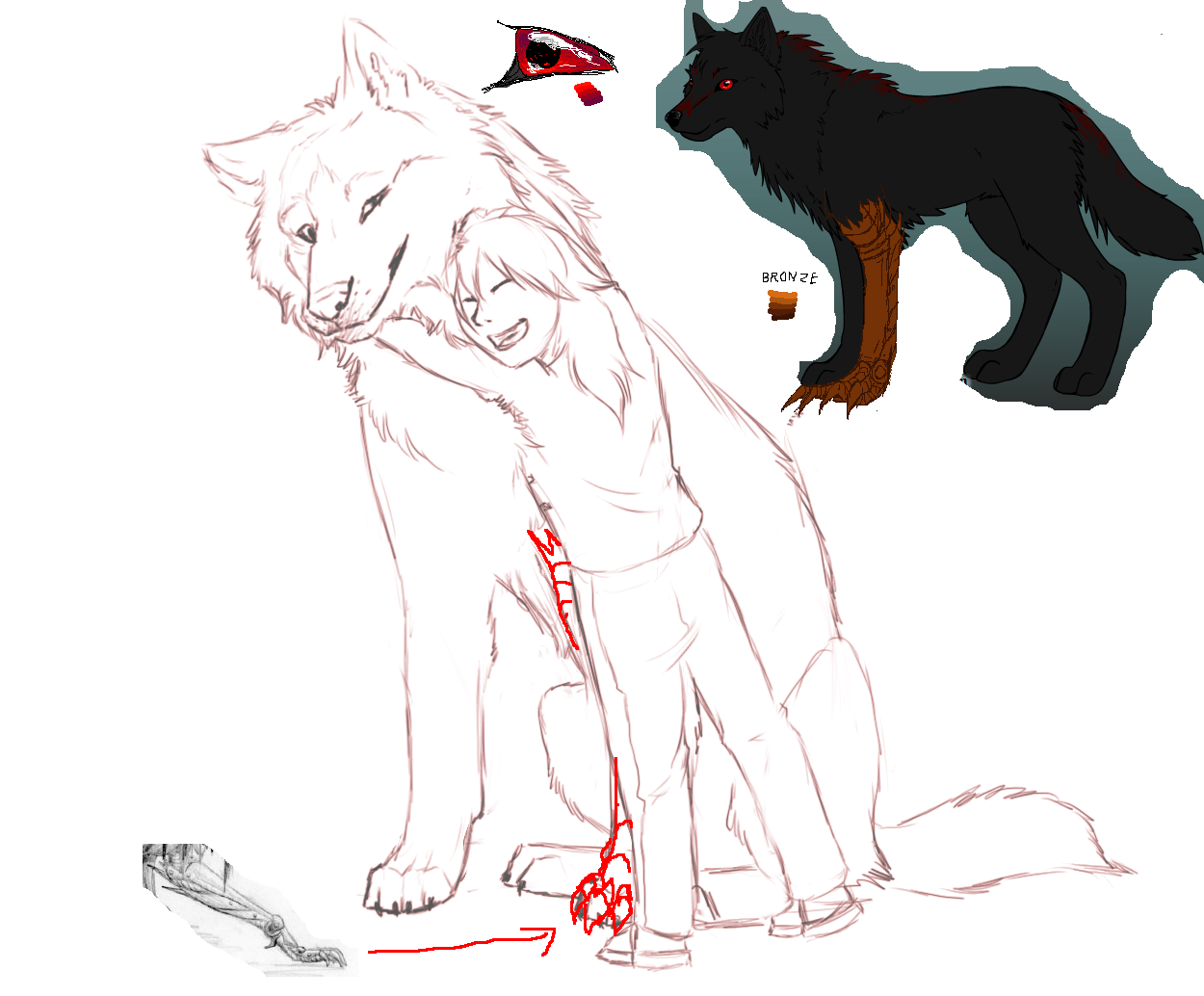 Ram'r's preference for weaponry is mainly towards his bladed shotgun, Warlock; but the spirit-weapon can transform into many other forms, most often a sword, dagger and spear. He has very limited abilities over his reiatsu - which is, fittingly, colored deep red with hints of purple and gold - as well as even more limited abilities of healing. In his Anima's wolf form, he has the added bonuses of wolven strength and stamina, plus the ability to fire a blast of energy from his maw; something that he uses rarely, for it's dangerous and may leave him unconscious for long periods of time. In addition to these, he is a skilled marksman and excels with many weapons, namely the bow and pole or spear. This transformation into Kritou is detailed in the section below.

Kritou is the name of the Death demon spirit Ram'r was fused with as a youth; released in full when Warlock's bonds were broken, the rogue battles against this entity for control. Being a demon affiliated with the kingdom of Death, to survive he must kill, and often breaks through Ram'r's defenses simply to kill for both sustenance and pleasure. Having a sadistic and arrogant personality marked with dark humor, Kritou is Ram'r's greatest and most agonizing fear. Interestingly enough, perhaps a remnant of the demon Kritou once was, he has an abhorrent hatred for anything female.

Kritou is able to control a few specific powers in two forms; in his first and normal form, his main power is quite dulled from what it is in his 'final', or complete, form. This is the ability to temporarily steal powers and use them for anywhere from an hour to a day, depending on how much energy the stolen power uses and what form he's taken. He is also able to concentrate reiatsu into powerful blasts using Warlock, though the use of this has been known to knock him unconscious and revert back to Ram'r instantly.

Appearance-wise, Ram'r goes through a number of changes. He grows long silvery horns and his ears lengthen and become tapered, quite exaggerated over that of an elf's. He grows talons the color of steel and a thin, bladed tail, also silver in color with banded red markings that seem to fade at the ends. Long, ragged wings with a deep red webbing spread from his back and to either side, hook-clawed with three wing fingers on each. His eyes become yellow and catlike, and his hair gains grey and white streaks near the tips and roots. In his final form, he becomes much more demonic and almost draconic. He gains silver hide, an elongated and almost crocodilian muzzle, his tail becomes much thicker and stronger, wings become a lot more ragged, and his clothing becomes ripped and torn from scales on his arms and legs as well as horns on his elbows and running down his back.

No, he's not a chibi, just need to get a non-chib image of him made :D LOL

( when this began )
I had nothing to say
And I get lost in the nothingness inside of me
( I was confused )
And I let it all out to find
That I'm not the only person with these things in mind
( inside of me )
But all that they can see the words revealed
Is the only real thing that I've got left to feel
( nothing to lose )
Just stuck, hollow and alone
And the fault is my own, and the fault is my own

And I've got nothing to say
I can't believe I didn't fall right down on my face
( I was confused )
Looking everywhere only to find
That it's not the way I had imagined it all in my mind
( so what am I? )
What do I have but negativity
'Cause I can't justify the way everyone is looking at me
( nothing to lose )
Nothing to gain, hollow and alone
And the fault is my own, and the fault is my own

I will never know myself until I do this on my own
And I will never feel anything else, until my wounds are healed
I will never be anything till I break away from me
I will break away, I'll find myself today

Somewhere I Belong by Linkin Park.

Ram'r in his Anima form being hugged by his son, Kai. <3

Ram'r and Kai's mother, before the Breaking of the Pairbond.