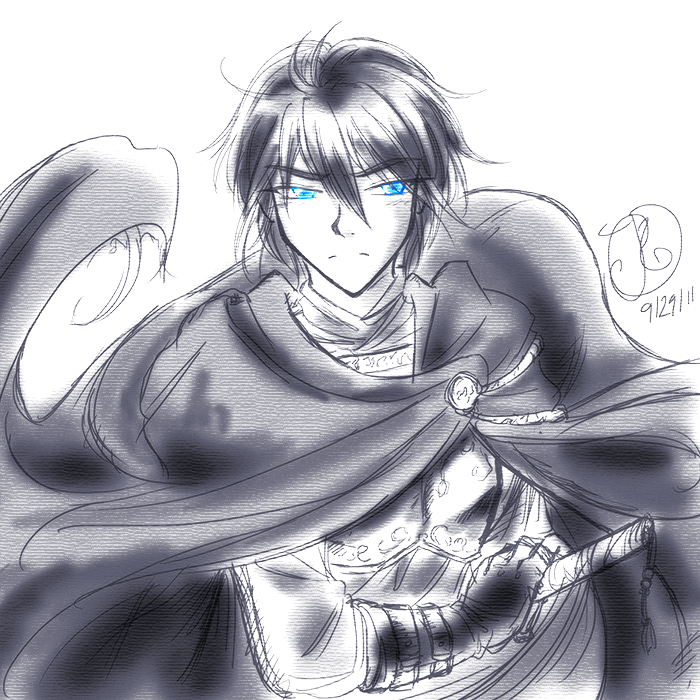 Ahrydian - better known as Ryan - is a young man of middling height, Millirandian human in race. He has thick black hair, generally kept at medium length, that falls around stark, sapphire-blue eyes. His skin is pale, and resists tanning - he burns rather easily in prolonged exposure to the sun.

Most often, Ryan may be found wearing blacks, greys, silvers and blues. He often wears a dark tunic and lighter breeches, with a black traveling cloak tied by a gold cords and a sapphire brooch. Sometimes, he will accent his clothing with similar colors - during his days as a Faction commander, he wore a belt of gold and straps around both arms, along with a blue sash to mark his rank. He still dons these - sans the sash - on occasion, if only for their looks.

When going into battle, he may affect a plain breastplate, bracers, and greaves of steel, but prefers not to. However, he is never seen far from his sword - a plain but well-made weapon of dragonsung steel, set with a sapphire in its pommel. A cord of gold hangs off its hilt with beads sometimes strung just before the small tassel.

While Ryan wears no jewelry, he keeps a plain silver ring on his person, generally hidden away in a pocket. If asked about it, he tells that it was his mother's - a keepsake, nothing more.

Upon first meeting, Ryan seems cold and calculating; sometimes silent in his observations, brooding, and often deep in thought. He doesn't open up easily, and trusts very little; but he is very protective of those weaker than he, even if he has no relation to them. With very little care for himself - and the belief that he is flawed beyond repair - he does all he can to defend those he cares for and fight those more powerful than he.

Ryan often fears and hates those with great power; he sees it as unnatural, and too easily abused. Because of this, he has come to hold a worldview that power is a dangerous thing, and was caught in the Faction's nets, inspiring a deep-set abhorrence of dragons because of their nigh-unnatural strength. He struggles to come to terms with that view, and dragons that have no power; but his fear of them is no easy thing to drive away.

Ahrydian has one thing of great importance in his life, one thing that he would sacrifice anything for: his little brother, Rolo. No matter what the cost, Ryan would do anything to protect his younger sibling. He has often attempted to prepare the child for a world without him, but is terrified of what will happen when he eventually dies. He is a kind, caring elder brother who seeks beyond all to make a world where Rolo can live in happiness, with or without him, away from fear and pain. To see Rolo upset is something that unsettles and distresses him. On the other hand, Rolo is much the same way with Ryan; the child wants to see his brother happy, and is just as protective - if not more - especially if his older sibling's life is in danger.

He believes that he won't live long because of his heart defect, and has accepted the fact that someday it will be his undoing. The sword that keeps him alive is a precious thing to him, but one he is prepared to lose - for he sees it as inevitable, and knows that if the enchanted weapon is ever stolen or destroyed, his damaged heart will claim his life. However, even though he has accepted that his fate is to die, he still feels some fear - even a thread of panic - if an opponent ever disarms him and seeks to keep the sword. Especially if his brother is nearby.

Naturally, Ryan's abilities are too weak to manifest without a catalyst. He is aligned with the element of light, and can summon barriers and limited offensive strikes so long as he has his sword. When touching the weapon, he is able to focus his power and utilize it for brief periods of time - though this drains him swiftly, and interferes with the sword's healing enchantment. The risk of using magic is thus very high.

Born with a heart defect - systolic failure, meaning that the left side of his heart cannot pump properly - he is always aware of his closeness to death at any given time. He has a sword, crafted by his father, with a blue gemstone in its pommel; this gemstone is enchanted to keep him alive, and channels a steady stream of healing magic to keep his heart pumping normally. If this sword is ever lost or too far away, the healing effect disappears, and his condition begins to degrade. If he is not reunited with the sword in time, he will die.

The sword's magic works by proximity, and how strong or weak Ryan is at any given time. When he is well rested and strong, he is able to keep the enchantment going even if the sword is some yards away, and not within reach. When weaker, he must be closer to the sword for his magic to work and for it to keep him alive. When severely weakened, it may not be enough to be near, and he must touch it for the enchantment to keep his heart pumping as normally as it should.

If his sword is apart from him for too long, his condition grows steadily worse. When at full strength, it may take days to kill him fully; but when weaker, it may take only hours, or even minutes, before severe effects are felt.

First, his heartrate begins to increase; the beat will often become fluttery, too hard, or noticeably irregular. Fatigue and weakness will assail him next, and he will be short of breath until breathing becomes increasingly difficult to manage. He may begin coughing until he coughs up blood, and will feel nauseous and dizzy to the point of being unable to stand. Chest pain may come at any time through these stages, as well as pain, pressure, and numbness, but will grow steadily more severe as his condition degrades. Finally, his alertness will falter and it will become more and more difficult to focus and think. At this point, it is almost irreversible; his heart will overtax itself, and the resulting heart attack will kill him.

And now at last

Character, coding, and all info (c) me. Art by Lumi (#2858) on gryffs and Xikhara on deviantart! Color ref tossed together by me. :D