he is our only Salvation ...

Often described as the light in the room, Salvation tries his hardest to make those around him happy - be it small jokes or extravagant stories. He appears as a bright and bubbly child, eyes filled with wonder and excitement, bouncing from topic to topic in any conversation. He is a kind and caring boy, one who would rather push aside his own discomfort to take away that of a friend.

This, however, hides a simmering depression. Locked away from the world for so many years, and subjected to the death of his only friend, Salva holds much more sadness than he would like everyone to believe. He hides it well, though in times of great stress, he's prone to bursting into tears. In such times, he feels a crushing despair, something he says is impossible to fight.

Locked away centuries ago, in order to turn Salvation into a weapon of war, was his ability to age or mature; within him lay an entity known by his given name, Nazeer. Nazeer is what Salvation would have become, had he been able to live his life as he should have. Far more serious, sometimes to the point of uncaring severity, this adult version of Salvation has an outlook on life as hard as steel. He can be stoic to a fault, even cruel, with defenses unbreakable compared to that of his younger self.

It is said that Nazeer died when they destroyed Maelstrom; no evidence of the spirit's continued existence can be found.

Short and slender, Salvation is a child who looks to be of around eleven or twelve. His most noticeable feature is a pair of branching white antlers that sprout from his skull, bearing three prongs. The reason for this, he's concluded, was that his father was a forest-Kin stag xeriin, and his mother a sky-Kin blue heron - even though his affinity twisted into that of a gryphon, he still inherited his father's branching horns.

He has deep red hair and long, fluffy feathered ears, curved talons on both hands and feet, a leonine tail, and long, broad wings. The coloration of his feathers ranges from a midnight black to silver and specks of white, growing lighter at the tips. His eyes are a bright, emerald shade of green - they're slitted like a cats, and will often dilate or constrict with emotion. Usually, Salvation will wear light colored, long-sleeved tunics and a jerkin over the top, with black breeches and no shoes.

The small pendant around his neck is very important to him: a fang with a ruby embedded into one side of it. He almost never removes it, and often hides it under his shirt. The significance of this is a secret known only to him.

When Nazeer manifests in a physical form, he appears as a taller, older Salvation. His hair is somewhat longer, antlers curved forward instead of back, and his wings are so long that they brush the ground when he walks. He stands around six feet, and has both darker hair and eyes.

Salvation is currently unable to take gryphon form himself. However, when Nazeer is in control, he is able to shift into a very large gryphon with a long neck and long legs, most resembling his heron mother. His pelt is black, speckled in silver, where his face and the midparts of his wings are completely white. His beak, talons, and leg scales are black as well. He has white antlers, a thick maroon mane and tail tuft, as well as long maroon flight feathers, unlike that of his humanoid form. Lastly, his eyes are the same color green as Nazeer's. 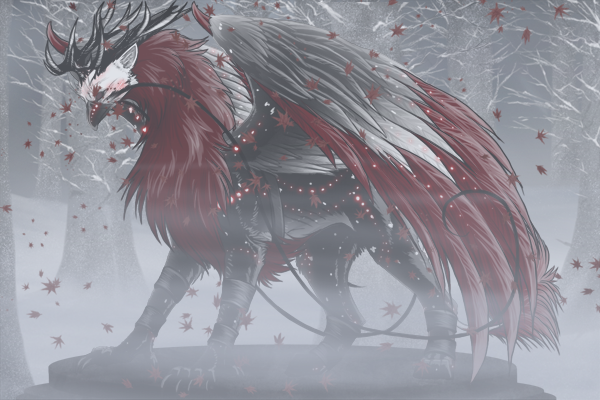 antlers and eyes on this image are incorrect! everything else is spot on~

As a child in his natural state, Salvation had an uncanny control over his aura; he was able to make small bursts of it appear at will, and even shape it to images in his head. However, when he was drawn into the war that his parents were killed in, those abilities were enhanced and honed - he was trained alongside a Saurian that was a proven battlemount, one who had a hide that could take spiritual attacks with a limited amount of damage. His aura began to manifest as silver dust, molded to his will, as an earth-elemental could mold sand.

Even now, long after the death of the Saurian who had taught him so much about his aura and many years of disuse, he is proficient in sculpting it to do what he wills. Currently, he can utilize the density to form shields, the friction to create heat, and many other things besides. He's usually able to use this power for a few moments before becoming exhausted, unless under the influence of Nazeer.