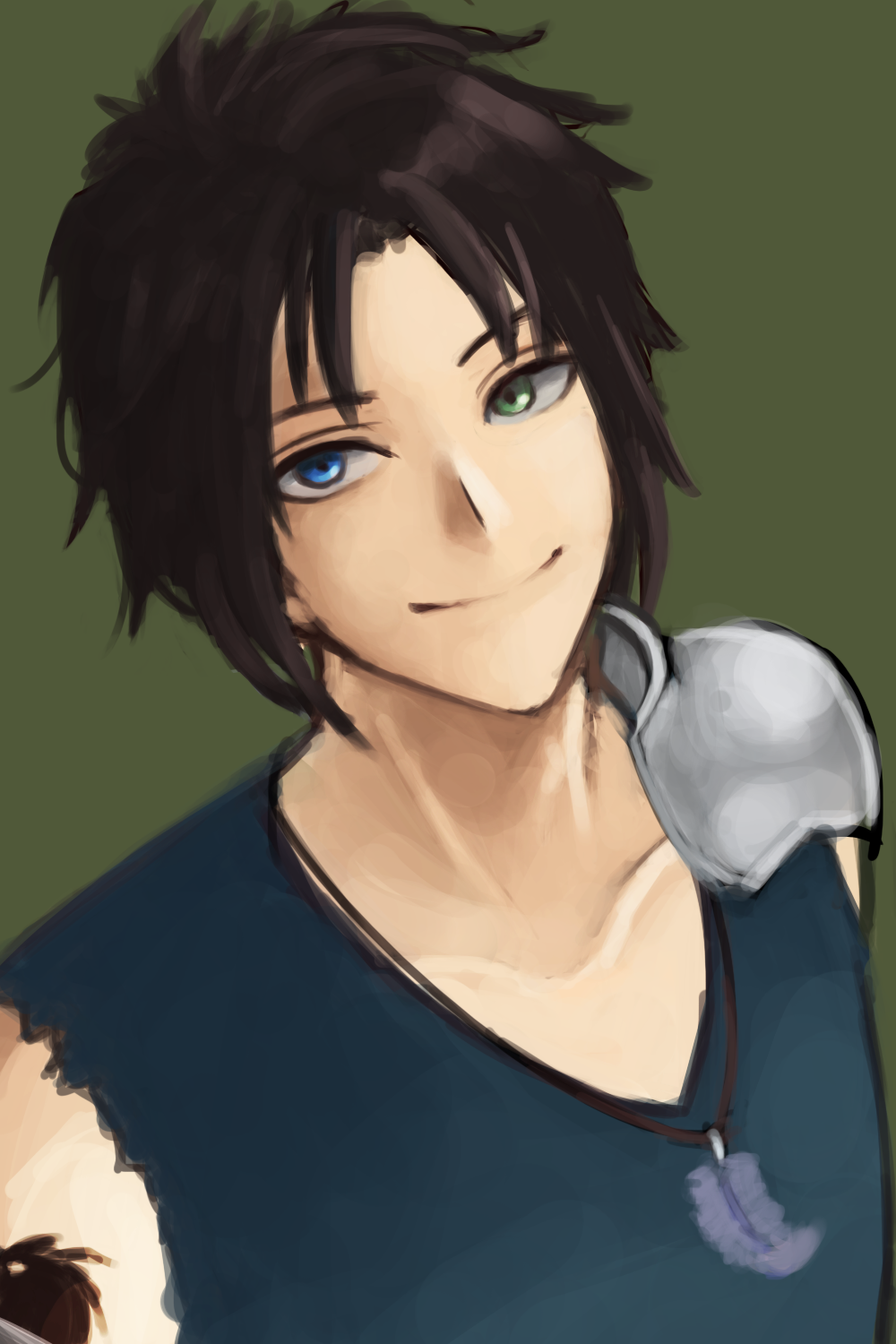 Shyun is a trained human swordsman, dressed in the garb of a common mercenary. He wears a short-cropped black or dark blue tunic, cut at the shoulders, and elven-made steel armor on his shoulders and wrists, very rarely a cuirass made of decorative bronze-inlaid iron plates. He also dons fingerless gloves and study boots, in addition to a sheath strapped to his back and a dagger to his belt.

This swordsman is of average height and black-haired, some falling around bi-colored eyes, green and blue. Often seen with a smile, he uses bandages to hide the tattoo-like scars of the Contajion, black marks on his upper right arm and splayed across his chest that mark a nigh-incurable stigma. On his right shoulder, the marks curl into the figure of a twin-headed dragon, though the significance is unknown. When under the influence of a Contajion attack, these marks twist and grow, often overtaking his entire arm and shoulder.

Rarely seen without a smile, Shyun is a carefree, easygoing individual, one who loves to joke and cheer others up. He makes friends easily and is quick to come to their defense, as well as others who may need a helping hand. He would put his life on the line to save a wounded ally in the midst of battle, and would face down an army for those he loves. Though his mood is tempered both by Lowan and his recent losses, he still strives to smile, and will always jump at the chance to lighten the mood. The return of his daughter Anna and the support of his ever-present pairbond Cassara have all but eradicated the depression he had fallen into after Blind's death and Orochi's taking of his younger daughter.

When not involved with one of Felnova's many wars, Shyun returns to a small cottage in Song Forest, made of thick oak timbers and sturdy granite stone. Here he's able to rest along with his jailen felidae, Baal, and his family.

Baal is a windcat who resembles a balinese cross, beige with darker stripes and points. He wears a runestone strung around his neck, blue in color, and marked with the kv'naier rune for J. Being one of the jailen, he has elemental abilities that grant him the use of air and wind, and he uses this to 'carry' many items for himself and his master. He is often fond of painting, and is very artistic and intelligent - he paints with the tip of his tail, and has been known to write letters using ink.

drag to the address bar to see in full!

Shyun possesses a very rare disease called the Contajion; known for its extreme death rate and the black markings it leaves behind, it is incurable and very, very deadly. It lay deep in the soul and forces the victim's reiatsu to turn on itself, resulting in very painful attacks increasing in duration and frequency the older they are. Shyun has a small trinket to combat this; a feather from Linath, given to him beneath the Soultree and in the company of a good friend, he must never lose it, or he will be destroyed.

Shyun has three swords - all described below. Two of these swords he keeps in the Jn'ae'iin gemstones, gifted to him by Lord Tefla. These permit him to store weapons inside small, round gems, their full breadth summoned at need. He generally keeps one sword strapped to his back, the other two used only in emergencies. 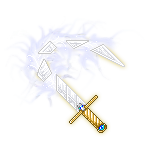 Lowan;; Lowan, a spirit-weapon of immense power. Often called the godblade, this sword has been infused with the spirit of a powerful, godlike dragon called Lowan, who is said to be the earthly incarnation of The One. It was built in segments, each riveted in place by two bolts on either side. The broadsword is long and sharp on one side; but the thing that sets it apart from others is the way the segments may detach and extend, held together by a throng of blazing reiatsu, purifying white flame. 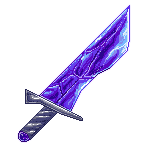 Sabyr;; Sabyr is a blade made completely out of bluish-purple crystal, sharper than diamond. It cannot be broken, and has powers locked inside of an unknown origin. 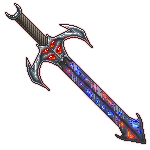 Scream;; Scream is runeblade with a dark will; once called Runic, the blade was tainted by a shade and darkened into something evil and malicious. Though it isn't a spirit-weapon, its evil intent speaks and it constantly tries to influence Shyun's actions when used. It burns any who touch it without its permission, though many of its other abilities are unknown.

Gallery of images; drag to the address bar for better viewing.

All coding credited to myself, Blazeh, (verridith). Reference artwork credited to a lovely person on Wajas I need to track down again*! Side art (c) Novalyn on Artfight. Zack, who Shyun was originally based off of, is copyrighted to the beloved Squeenix.

* If you see this and know, please hit me and I'll get your name up here ASAP <3

ALSO: Cassara and Panax only exist when Lyon's part of BTACD. ;) She stops in from time to time.