...what are these memories?

what are you, nuts?

coulda told you that!

heh. hey kid! you got it aaall wrong now. 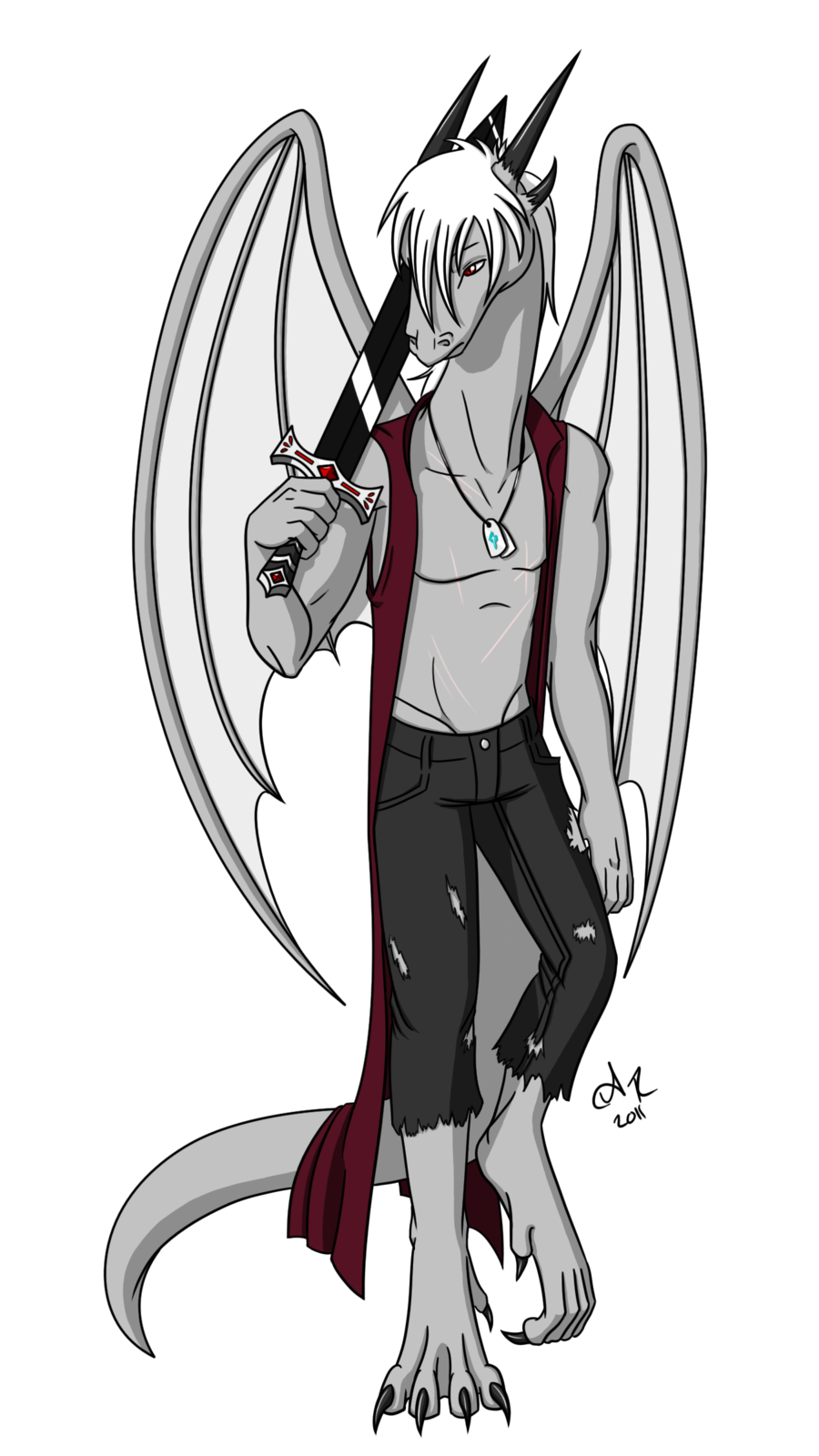 What do I want? Who knows. Who cares. I ever asked for the Lordship I was given. What the hell do the gods care - they don't even look at Kurai anymore. We're forsaken, and that's that. Sometimes you just gotta accept life is shit and move the fuck on.

get outta my face!

Standing at nearly seven feet tall, Slain is an imposing figure. He is both dragon and demon, and holds a unique appearance that calls equally to both. With long, whiplike wings and a long, draconic tail, he's able to balance himself far better than most - both in the air and on the ground. He stands tall on the balls of his feet, much like a worgen would, and utilizes his physical features to the best of his athletic ability. Most surprising of all, however, is his facial features - that of a dragon's, black-horned and silver scaled, broad muzzle filled with sharp teeth. Scarlet eyes glint from beneath bony brows, and a shock of white mane flows from his forehead down his neck and back. A scar crosses his chest, over his heart, light enough to match the silver webbing of his wings.

Most of the time, Slain will wear a variety of broad trenchcoats or cloaks, slitted at the back to allow for his wings. These can be any color from red to maroon to black, and are always open at the chest. He wears rather worn black leather breeches, rarely black vilam, and no boots due to his sharp-taloned paws. He also wears his sword, Visis, across his back - and a slim pair of pendants around his neck.

During the Hell War, he was also granted the form of a human; tall, with a similar, muscular build to his anthro form, he sports tousled white hair and scarlet eyes not unlike his brother. However, compared to his brother, he appears to be older and has chiseled facial features rather than Jekt's refined face. He likes to wear black leather and sparse silver armor, though is most often found bare-chested (or shirtless).

so what? fuck you.

As the Demon Lord of Famine, Slain is an arrogant royal who has an ego larger than most mountains. He's full of himself, proudly so, and likes to flaunt his power around those he doesn't like. He's sarcastic as they come, and can be blunt to a fault. He's a stern and sometimes unpredictable leader, subject to his own impulsive behavior.

To those he cares for, he is fiercely overprotective, to the point of harming others who get in the way of the welfare of the ones he loves. He isn't above killing for family, and has done so many times before, with varying results.

Lastly, he likes to joke around and have fun with friends. He's a huge flirt, loves women, and will go to great (sometimes inconvenient for others) lengths to impress someone and show off. He's a thrillseeker, and will go find the biggest, baddest, most hideous demon to kill just for the hell of it; a habit that friends and family have long since stopped trying to break him of.

Slain's abilities pull from both his demon and draconic heritage, enhanced by the power of his Lordship. He is gifted naturally with enhanced speed and strength, and is quite physically agile. His whiplike, flexible wings allow him to pull maneuvers most find cumbersome in the air, and he uses his tail as a rudder when moving at high speeds. Gifted with the defensive capability of dragon scales and the offensive power of tooth and claw, he prefers to do most of his fighting without power, hand to hand, or with his sword alone.

His favorite weapon in close combat is that of his darksteel sword, Visis, said to have a twin owned by the demon Cipher, and has served him well for many years. It seems to have a mind of its own, and won't be wielded by anyone it doesn't accept; Slain is able to summon it and banish it at will, usually pulling it from the air when he isn't wearing it across his back. Its pommel and handle are made from regular dragonsteel, set with rubies and wrapped in black leather.

In addition, he has strong sense of his aura, and is able to utilize it in silver flames shot through with crimson lightning. Often, he'll use one or the other - he learned long ago to 'separate' the two versions of his reiatsu, and found that each has different effect when used. He can use the fire as a defense or offense, able to decimate wide areas with ease - or the lightning for direct, pinpoint attacks that create instant, lethal damage. Unlike normal lightning, the reiatsu bolts can't be deflected, redirected or absorbed by conventional means, though the fire acts much more like normal flame. Most often, he uses a mix in concussive blasts usually paired with a bunch or kick in anger.

Lastly, in his true shape, Slain is immensely difficult to injure thoroughly; he holds a healing gene that seal most injuries within a matter of moments. However, he is still prone to suffocation, broken bones (which heal, but more slowly), acid, poison/venom, some sicknesses, and magical dampening. He cannot, in any way, regrow lost limbs that have been severed. In his human shape, this gene does nothing and he will heal at a normal human rate.

Being the Lord of Famine, he is also prone to falling into the Famine Ito'niza, or the Lord's Form. In this, he gains a rib-cage-like exoskeleton, longer horns and fangs, and his scarlet eyes become green and glow brightly. His reiatsu will also shimmer emerald for as long as the Lord's Form lasts.

In this form, he is much more powerful but is also prone to burning out much faster. Generally, when he affects the Ito'niza, he is also very angry - and thus not incredibly prone to seeing reason.

He has two Tri'akun forms, as do all royals; though nothing is known of his Final, as he's never been forced to use it. Only on a few occasions has he been pushed into the first, a more animalistic version of his anthro form covered in spiked and bladed silver scales, mirror-like and highly reflective.

His wings' webbing turns into sharp, featherlike planes of light, blinding to behold and reflected tenfold off of each scale. His horns and claws grow in length and gain the appearance of sharp, black blades that can be extended or retracted at will, made to any length; his bladelike scales share this trait. His tail splits into three, each tipped in blades and fire. Lastly, his fangs and eyes turn black and his mane curls in glistening white flame, crawling down his shoulders, wings and back.

Long ago, Slain was captured by the snakekind Queen, Snakra, and afflicted with a very particular curse. The long scar across his chest marks the ritual used to complete it, and often aches when he so much as thinks of his own true name. The curse is called the Curse of Name, and involves the name he was born with as a catalyst.

The way it works is very simple - when his true name, Martyr, is spoken (either by him or another, it doesn't matter), he is inflicted with the wounds of the most severely injured near him, usually within a thirty meter diameter. Because of his healing gene, where his injuries heal at an incredible rate, he heals almost instantly from even fatal injuries, and uses this to save those fighting around him. However, using the Curse too much will begin to weaken and slow him, until he is too exhausted and on the verge of a Tri'akun.

Using it in his human form can prove ultimately fatal, as his healing gene does not work in anything but his true shape.