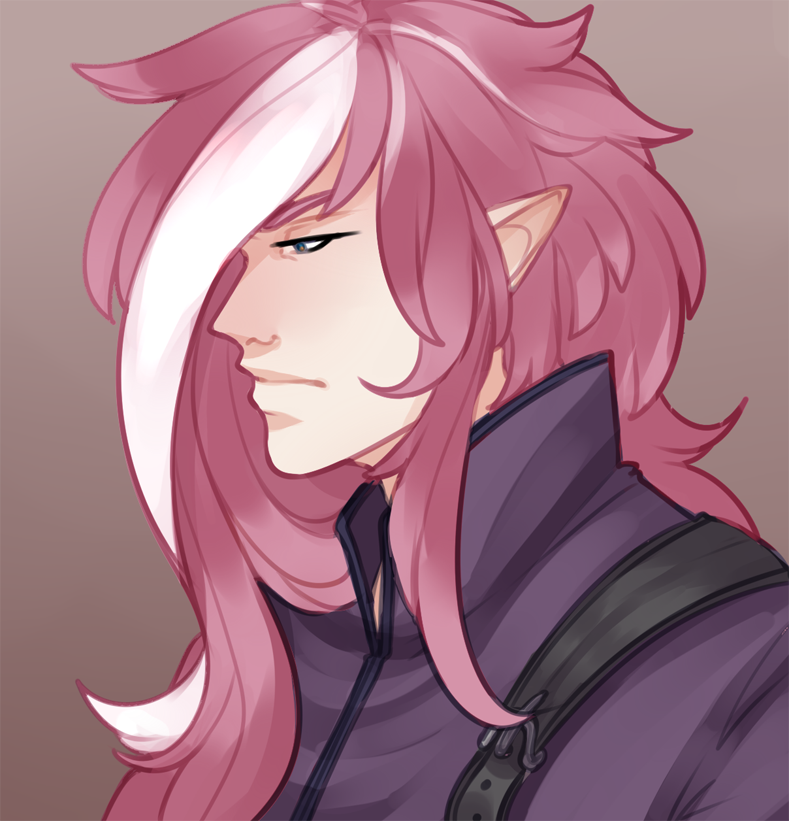 screaming, snarling
crying out, clawing free
for in every lie, there is a truth desperate to break away...

An elf in demon's form; Tragedy is a volatile, unpredictable demon of Death, one who hates his form and even his very existence. Loathing fills him, and he's sought to stray away from others for many, many years. Living in isolation has granted him a keen insight on the ways and workings of the world, and an ability to observe from afar without being detected by the keenest of mortal senses. He sees truth that many overlook, and can detect darkness before many others. Haunted by his past, he often seeks to escape it; though nightmares plague him very often.

To the very, very few that he trusts, he is severely protective, and vengeful to an extreme if one should get hurt. He will go out of his way to help someone if he should come across them in their time of need - though he will act disgusted later on in an attempt to drive them away, further settling him in his aura of isolation.

Before he was cursed, Tragedy - called Falduin - was a kindhearted mapmaker who lived in the bustling city of Heartwood. He was very hard to put down in spirits - incredibly difficult to make frown. A gentle soul, he fell in love with a demoness, and split his time and money providing for them both. He never fought except to defend those he loved, and was not a warrior in spirit or at heart. He was content to make maps for the rest of his elven life.

Tragedy is a relatively tall elf with long, copper hair with a pinkish hue and a white streak in the front. He has a few other lighter strands, as well - mostly to the fore. His eyes are a pale silver-blue flecked with gold, a color that brightens and darkens in accordance with his emotions. He is well muscled and lean, with sharp claws tipping each finger, long pointed ears, and short fangs that often go unnoticed. Should he choose to, he can blend in with other elves fairly well.

He wears a dark tunic decorated in black elven designs, right sleeve cut away to make room for a plated arm guard that covers from wrist to elbow. It's a darker steel, engraved with elven curls, and a hidden slot that hides a quick-release blade. Across his back, he wears thick, black leather straps that can hold a sheath or quiver, should he have need of them - though most of the time, he carries or stores them elsewhere. His tunic extends to cover his left arm with a tapered sleeve, clasped around the wrist with a rune-marked bracelet made of slim-forged silver. On his right hand, he wears three slender silver rings, and on his left ear, a single silver hoop.

Around his neck, he wears a silver pendant that holds a small locket, sealed with magic against any other but him who try to open it. What lay within is known only by him.

As an elf, he looked very similar; though his eyes were a bright shade of green, and he had no white in his hair. He also lacked the demon's claws and fangs, and didn't yet have the pendant.

Long ago, Tragedy had fallen in love with a demoness of great beauty and charm. She was silver-haired and had bright scarlet eyes, their pupils lined in iridescent gold. Seemingly gentle and joyful, she seduced him into wanting to pairbond with her, and they spent many years planning out their future.

The demoness, however, sought only to use him to further her own ends. What those ends are, he never found out - for when she was done with him, she cast a curse on him to turn him into a lesser demon that she could control. But the curse rebounded and caught her in it as well - she became elven, while he was morphed into a high-class n'vaen. Enraged at her curse's failure, she attacked him and sought to kill him and regain her demon blood. But, unknowing of the power he then held, he retaliated out of instinct, and his corrosive aura ate her, flesh and bone, until she was nothing but ash.

The elves of Heartwood found him the next day, and drove him away, calling him a monster and a devil. He fled, then, and never returned; it was thought by his family, and his sister Jetta, that he had died somewhere out in the wilds. But in truth, he sought escape in other Realms, and eventually settled in the unexplored regions of the Lizzarkythian jungle.

It was here that he met the little faegryph Flit. The unlikely pair became fast friends when he saved the tiny gryphlet from a hungry fauxian - after that, Flit refused to leave Tragedy alone. So he took the creature as his only companion in the cold wilds, and camped beneath the trees for many, many years.

Tragedy's aura was corrupted by the curse, and is now both his greatest weapon and greatest weakness. It is dangerous to use, acidic and chaotic; he can disintegrate anything with but a touch, though it constantly seeks to attack him from inside. Though he's learned to control it fairly well, his power over it wanes even now, and each year that passes it gets harder and harder to keep at bay.

Beside that, he has become an expert marksman, though he uses the sword at his side as a channel for his reiatsu and nothing more. He isn't a swordsman at all, and would lose horrifically if ever forced into a one-on-one swordfight, bereft of his power.

Tragedy's Tri'akun is that of a monstrous, disproportionate wolf with long hair and a starving build. Its chest is very large, and a mane of fur grows around his neck and torso, constantly waving in an unfelt wind.