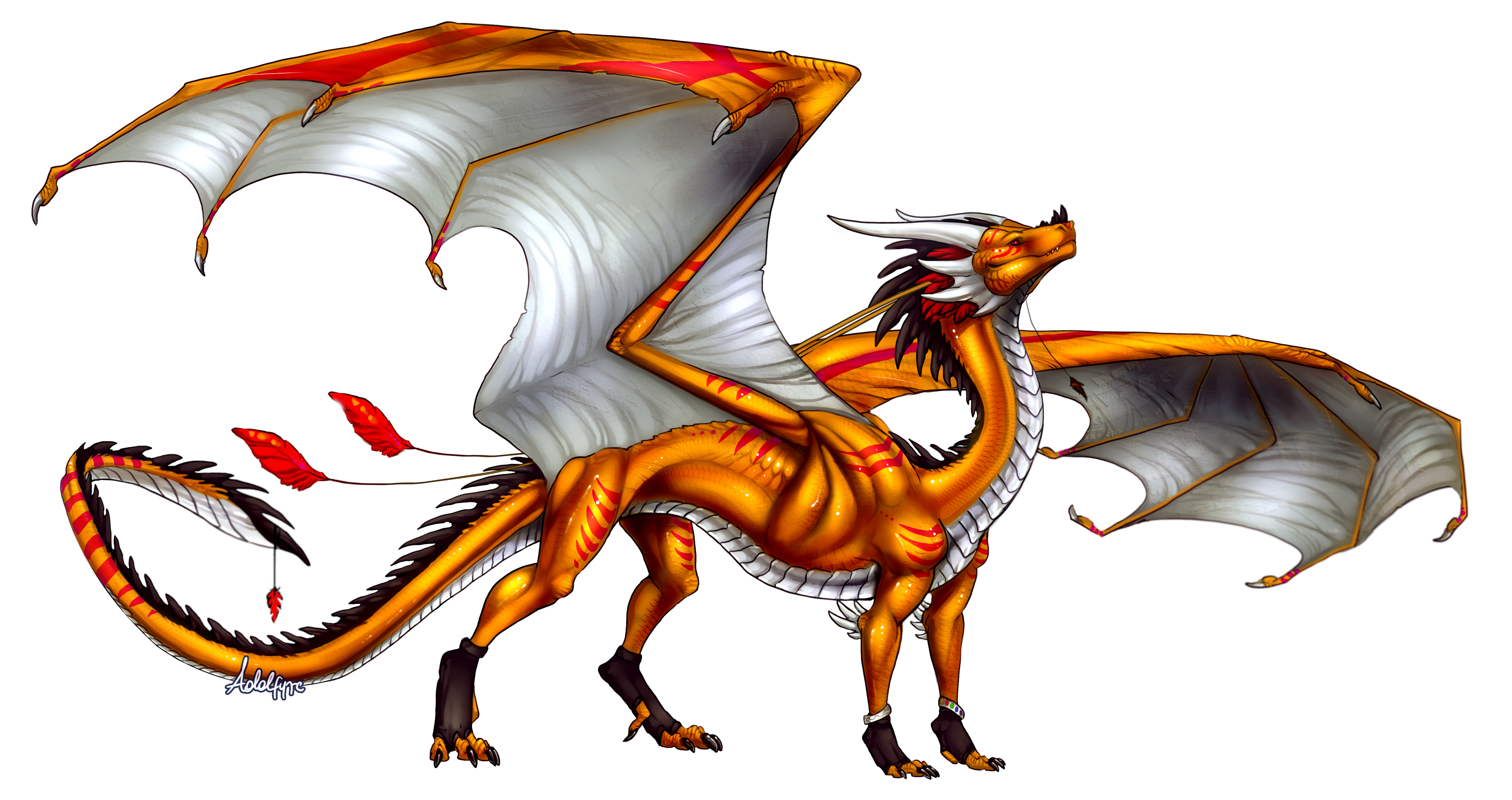 Strikers of the Sky, Forth unto Victory!

None will be absolved of my vengeance. Those who have corrupted my people, slaughtered my friends, and destroyed my country: I will see you burn in my flames until there is little left but ash to remember you by... 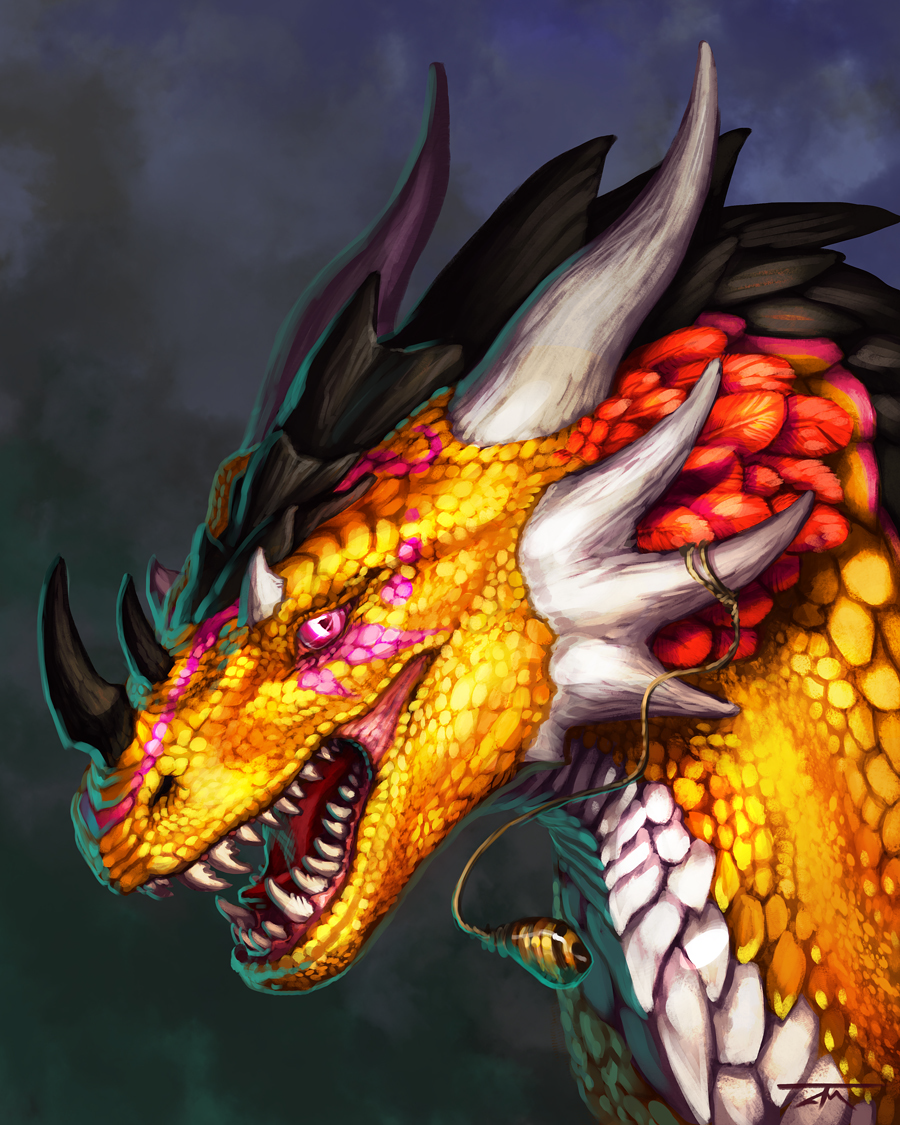 Verridith is proud and arrogant, ambitious to an extreme, and holds strong beliefs that she defends until the end. Nevertheless, she's not too proud to admit when she's wrong, and will attempt to mend any broken relationship she's inadvertently undone. As a leader, she is rather haughty, though an excellent strategist and a strong queen. Her people look up to her for both her valor in wartime, and her kindness in peace.

To friends, family and - of course - her rider, her loyalty is unmatched, and she has a strong sense of honor. She is kind and gentle to younglings, and loves the daughter she has herself. She is also a spectacular mentor, not only to Arnus, but those wyrmlings that she loves to be around as well.

In battle, she is fierce and ferocious, though not without mercy. As stated before, she's an excellent strategist, and seeks to exploit larger enemies' weaknesses due to her relatively average size. Often, her strategy and speed has saved them from being killed after discovery on key scouting missions, enabling both dragon and rider to return unscathed. At this, however, she seethes, wishing more than once that they were at the head of the battle. She loves to utilize methods to confuse and deter the enemy, allowing her forces a quick strike before they can recover.

Flashy and metallic, Verridith sports bright golden scales that flash in the sun; their sheen is as iridescent as diamond-coated metal, reflective and polished. These scales are marred with markings of red and violet, stripes that splay over her shoulders, down her back, along the backs of her wings and along her tail. The inside of her long, batlike wings is silver, the wingbones gold striped with violet and red. Beneath her violet eyes, two stripes curve down her cheeks, and lines of the same purple curl from the middle of her muzzle down to the tip of her nose. Two black horns sprout from the middle of this marking-diamond, joining with a crest of sharp black horns that flows down her neck, across her back and to the tip of her long tail. Two silver horns sprout from her head, shadowing three bony silver frills that curve around her face.

Her belly is plated with silver that extends down from her neck to end at her tail. Long, curved talons, pitch-black as her crest, curl from the tip of each long finger, the palms of her paws covered in dyed-black leather gloves. These gloves, held in place with metal bracers crafted by a dear friend, Exodus, protect her sensitive paw pads while enabling her hard talons to be used. The bracer studded with gems holds energy to power her elemental abilities. Attached to one of her face-flanking horns is a small pendant, a chunk of polished tiger's eye quartz, a precious item given to her by her grandfather, Fankorial. Lastly of her trinkets is her first scarlet feather attached to a silver ring adorning the end of her tail.

Behind her horns, hiding her small ears, lay a fan of bright red feathers. From these feathers, joined just underneath her primary horns, is very long trailing feathers that extend far past her flanks to hover gently above the ground. When flying, she can sweep these back between her wings - but otherwise, they trail alongside her, swaying back and forth with every movement. She's said that losing one of these feathers puts her off balance for the entire week that it takes to grow back.

In addition, she as several different 'elemental forms' she can use; each one changes her appearance, and often facets of her personality. These forms are taken when she delves deep enough into a certain element so that it overtakes her physical form; its essence will solidify over her body, accenting features and often changing her colors. The only exceptions to this are light and dark which, with no tangible elemental affinity, engulf her both body and soul.

The ones she's discovered are listed below beneath her normal abilities. 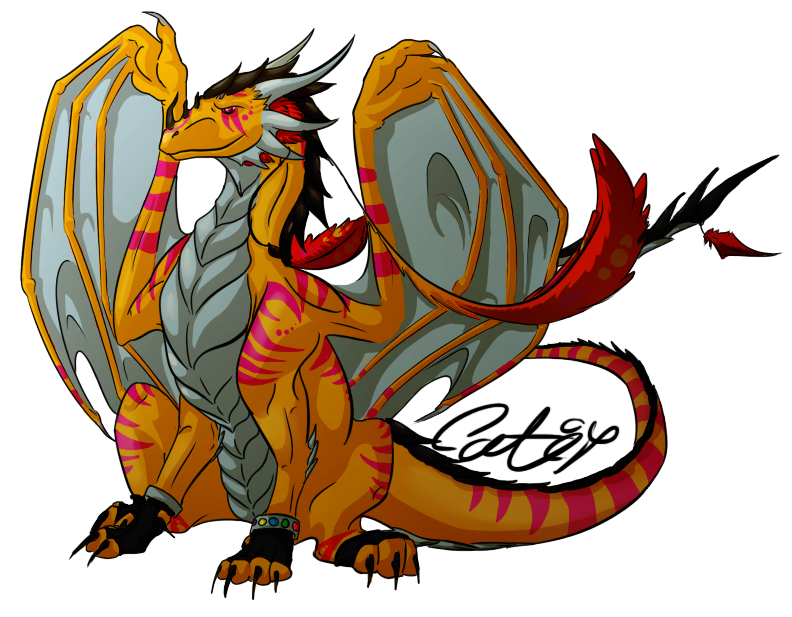 As a royal, Verridith has the potential for more power than most dragons; her control over the elements is expansive, and she strives to learn ever more. She is adept at utilizing fire, lightning and wind, and has achieved mastery over each one. Other elements come slower for her - she has a meager handle over light and dark, with some knowledge of earth, though water and ice still escape her each time she tries to use them.

Though she has light abilities, she isn't more than a haphazard healer; she can treat small injuries and heal minor things, but fatal or near-fatal injures she cannot undo. However, she's also learned the art of energy transfer and the utilization of reiatsu - though she can't outright heal those with major injuries, she can provide them with energy until a true healer comes. The great majority of her light magic is offensive and defensive, creating things from light energy and unleashing it in focused blasts or glowing flame.

He reiatsu is a bright, iridescent gold. Though her skills in its use are not exceptional, she may summon it inadvertently in times of strong emotion, both good and bad. When in anger, it seems to glow from her scales themselves, making her form shift and glow, dazzling the eye that looks upon her.

Like many royal dragons, she has inherited the ability to summon and control various elemental forms. This is a difficult, but powerful, ability that changes her physically and mentally, along with elemental affinities she could not summon without. To summon all but Light and Dark (which come about as a result of complete surrender to a particular emotion), she must offer a prayer to that element's corresponding god. Should the god deem it worthy, her body, mind, and elemental capacity will change, in a form that may revert back at any time.

These forms are those she has discovered and may use at will.

from feelings of joy

To call upon this form, she does not offer prayers to any gods - but she must suffuse herself in feelings of joy, and an absolute surrender to the Light. It has only been called a few times in recent years; the manifestation of her purity and will, it turns her golden scales a pearly white, and darkens her violet markings to a deep purple. Her horns grow to be crystallized and longer, curving forward along her cheeks. She also has more feathers that forms a mane flowing down along either side of her extended neck-ridge, as well as lining the leading edge of her wings.

When in this form, her personality is heightened - her thinking is altered to plan more quickly, adapt more ably, though she shows more compassion and kindness than normal. Her abilities with light negate all else, and she's unable to use anything but in this form.

from feelings of rage

The easiest, and most dangerous, form she may fall into - generally summoned by the absolute surrender to anger and fury. Much like her Light form, Dark Verridith is changed by the essence of darkness as opposed to light. Her scales dip in hue to an inky black, and sharpen along the edges to form spikes and bladelike plates. Her markings turn bloody red, as do her eyes - her horn darken from bright silver to a dull, dark steel. Her horns grow large and bladed, turned forwards, and her feathers disappear.

When in this form, all emotion is set aside; left is an uncontrollable beast bent on murder and destruction. Her abilities with shadow negate all else, and she's unable to use anything but.

with a prayer to Leartes

Very similar to her true form, her Fire form is a deep, iridescent gold. Her markings turn fully red and her scales become almost unbearably hot to the touch. All silver accents including her horns, plates and wing webbing darken, and her eyes blaze red and yellow with inner flame. Fire dances along her ridges and paws, and smoke can be seen wisping off of her hide as she moves.

When in this form, she is utterly fearless; driven with excitement and euphoria, bent on adrenaline, she acts as though fear and despair cannot touch her. Her abilities with fire negate all else, and she's unable to use anything but.

with a prayer to Time

The most unpredictable of her forms, even beyond that of of the Dark. Her Chaos form utilizes all elements at once, changing her form into something that has no static appearance. Her colors may change within seconds, and color seems to swirl about as her horns grow and lengthen, shorten, twist and straighten, constantly changing with the incredible forces flowing through. It is said that the spirit of Kazule joins with her to make it possible, as she is able to use elements she hasn't begun to master as yet. In this form, she is at her most powerful.

Nothing is known about her personality in the grip of the Chaos; it is as if she is possessed of another soul. It's used very, very rarely, and Time often does not answer such a prayer. Afterwards, Verridith is prone to collapse, and is pushed dangerously close to overtax.

These forms she suspects she has, but cannot summon them yet.

with a prayer to Zeldrima

with a prayer to Balion

with a prayer to Gaz'in

with a prayer to Scylla

with a prayer to Sago