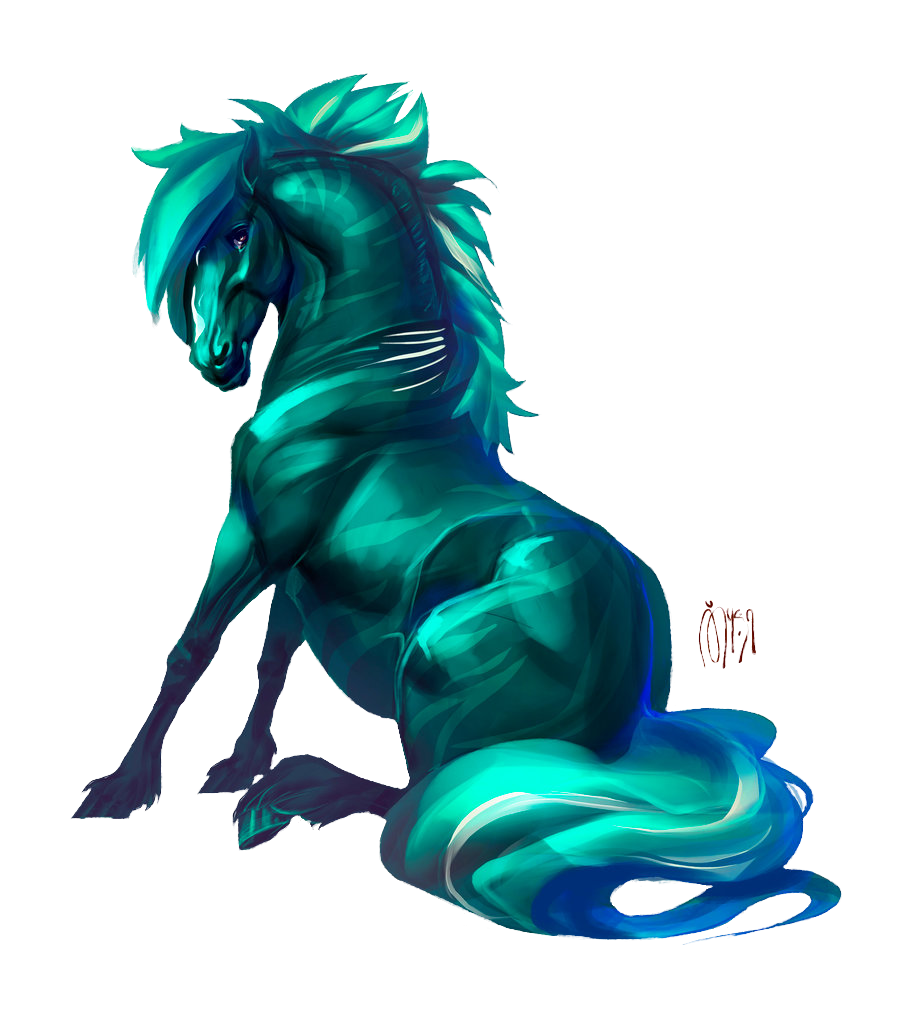 They say it's just not worth it...

Someday, I wanna be the leader of the Duscae herd; but everyone tells me I'll never do it. what's the big deal? I'm strong enough! I'll show them!

So what if all I can do is heal things. Combat skills don't make a leader. Smarts do. Isn't that what everyone says when you're a foal? That you can be anything you wanna be? Well hot damn, I'm gonna take this herd on over. Vidar is a young stallion with all the spunk and spirit of an elven horse, and all the determination of a warhorse. He has a build most like an Earthrealm friesian, with long legs and a muscular build, a chiseled and refined head, as well as a thick mane and tail.

His colors are shades of teal and dark blue-green, covered in tigerlike lighter stripes, each feathered fetlock darker in color. His hooves are stripes with lighter teal, and his mane and tail are the lightest shade of turquoise. White stripes mark his withers, on his face, on his left hind leg, and through his mane and tail. Vidar's eyes are a deep red-brown, that seem to darken or lighten with emotion.

Born and raised in the Duscae herd, Vidarious was pampered by his parents, and sheltered from all danger. He grew into an arrogant and cocky young colt, believing himself to be better than the other colts - and even when beaten down in challenges where physical strength was overridden by magic, he remained undeterred. His biggest dream is to one day lead the herd, but he faces great opposition, and is still quite young.

In discovering fillies liked him, he has taken a liking to showing off for any who show an interest in him, and undertaking dangerous tasks (often leaving before an older equus can make protest) to impress them. Though he isn't old enough to breed, he has promised mateship to at least three fillies... hearts that will, eventually, be broken. Of course.

He is spunky and brave, and can be quite goofy around friends. More often than not, he is found with a small band of colts and rarely is apart from them. Other colts that aren't a part of their group are seen as not worth their time, and they parade around the herd at will. Vidar, when with his group, will generally ignore authority.

Unlike most of his fellows, Vidarious does not have any abilities over offensive or defensive magic. He does, have the ability to heal minor wounds, and may leave glowing hoofprints when he walks, the length of glow dependent on how long it's been since he's used his power.

To heal an injury, he has to be in direct contact with the wounded creature or person, in order to transfer the needed energy. Be it the touch of a hoof or muzzle, how does not matter, so long as the contact is kept.