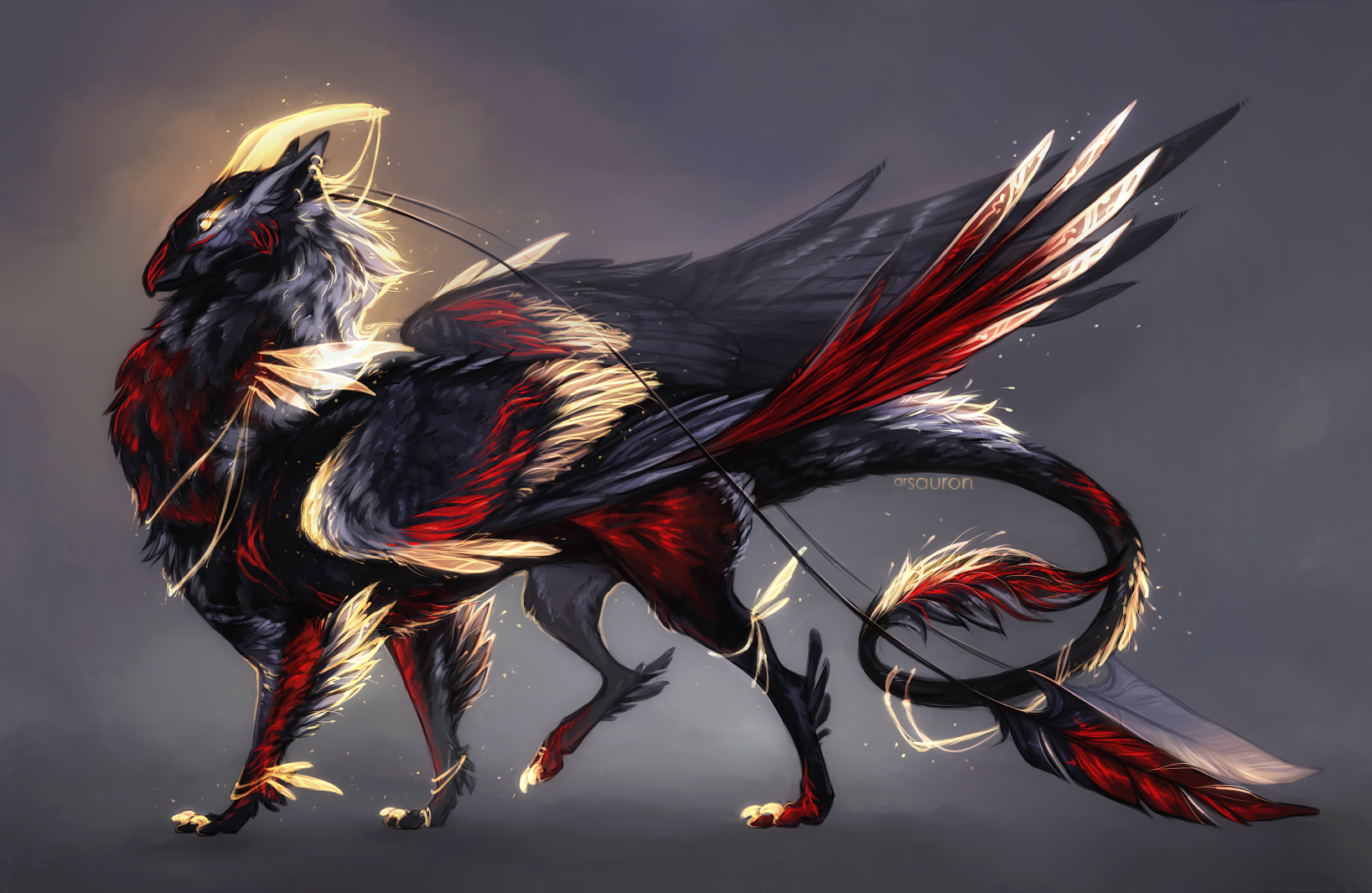 As an older gryphon, Zeroff is not as sleek or regal as he once was; grey can be found splashed across much of what was once pitch-black plumage, and he may appear to be rather ragged and unkempt. His fur grows thick and heavy, giving him the illusion of being much larger than he actually is. Twin trailing feathers extend from the base of his head, and shade to red at their tips. Two horns, metallic and seemingly made from white-gold metal, sprout from his skull above deerlike ears edged in silver. His talons are a similar shade of gold, and small trinkets made from the same material can be found all about his person. All of them glow with a faint yellow light, as do his eyes.

The base color of his feathers and fur is a deep, glossy black. On his face, ears, back, forelegs and tail, this color has lightened with age to a silvery shade of grey. Various feathers are tinted the same glowing gold, most noticeable along his nape, legs, and the tips of his wing feathers. Longer feathers dipped in gold may have a shimmering, swirling pattern, and may throw small sparks and afterimages as he moves.

Most of his markings are a variety of reds and maroons. Sharp red stripes mark his beak, face, shoulders, and wingfeathers, while darker and less defined markings course across his chest, legs, sides and tail. The underside of his wings are a bright, iridescent red-maroon, and is the brightest color in all of his plumage.

When Zeroff was much younger, he was black as obsidian and had stark red stripes covering much of his body; deep purple could be seen hinted in his plumage, as could the iridescence of a raven's glossy back. His horns and claws were a flat cream color, and his eyes were a feline yellow. He didn't develop the glowing golden coloration until he had truly mastered his abilities some time in his elder years.

Zeroff is old and tired. He is a quiet and soft-spoken gryphon, patient and wise. However, he is also stern with those who break Flight law - as he advises the leaders and warriors alike. As a former Flight leader himself, many look to him for guidance, and he is amicable to any who are able to learn from his own past experiences and mistakes.

Though he does enjoy spending time with adolescent gryphons, teaching them and offering them what he knows, he has very little patience for hatchlings and the newly fledged. Their sharp cries tend to hurt his ears and grate on his nerves, and in gatherings with many young chicks he will quietly excuse himself and retreat to where calm silence reigns.

To friends and family, Zeroff is very loyal and will stand beside those he cares for. Though he is not as strong as he once was, he is very protective of loved ones, and will often offer himself in their stead despite his age.

As a younger gryphon, Zeroff was enormously arrogant, proud, and enjoyed flaunting himself wherever he went. He led campaigns to overtake and absorb more than one Flight, and made many enemies. However, his view on life was shaken when one such enemy took his mate from him and slew her in her den, smashing eggs he had sired before they could hatch. Since then, he has become much less haughty and much more careful, leading into a relatively quiet later life.

Zeroff has a unique diet directly connected to his usage of magic. While he can devour meat like any of his kin, to use his abilities, he must consume liquid metal alloy - the extreme heat does not seem to affect him, though his feathers and fur will burn if touched by flame. Afterwards, he is able to weave metal like water, and may forge a variety of things from it. However, he cannot use the metal he has consumed, and the effects of his control stop once he has absorbed the metal in his body. This may take anywhere from a handful of hours to a couple of days depending on how much metal is initially taken in.

Most often now, Zeroff will make tools, jewelry, and trinkets for his fellow Flightmembers. However, he is also capable of crafting weapons and armor, and will grudgingly do so in times of war.

I Was Called Metalbeak

In his youth, Zeroff came by the moniker of Metalbeak; he rarely cleaned the molten metal from his face and often wore a mask of steel into battle, often with varying monstrous designs. Seeing as how this terrified his foes, he gladly accepted the name, and crafted a helm with a mixture of alloys that matched a set of battle-claws he wore regularly when on conquest. In his den, these things still lay - though he has not donned them in many, many years.

I have lived a long while; I have seen many come and go. I've raised hatchlings of my own and led a Flight to death and glory. But now, I serve a different path. The gods only know if I have chosen right...