A bright, metallic young dragon with bi colored eyes, brown and green. His golden scales range from a bright yellow to a deep orange-gold, heavily metallic and very reflective. A fluffy white mane runs from his forehead down between his wide wings, ending at the base of his tail; similar fur tufts sprout around his ankles and run the length of his hind legs. His tail is a sharp, bladed diamond surrounded in twin tufts of creamy white fur.

From his throat to the middle of his tail spans large, cream-colored plates that protect his underbelly from attack. His wings are large, flightworthy, and are two-tone in color: the same creamy white on the ventral side, with the dorsal being bright gold that shades down to deep orange.

He has a scattering of scars on his left side only, and is missing his left foreleg. Though this injury doesn't seem to pain him often, he is disabled and cannot land as gracefully nor fight as easily as he once had.

Talos grew up an optimistic creature, adamant about his opinions and full of hope for the world. He was gullible, however, and often too prone to leaping into a situation without thinking. Since the days of his fledglinghood, he's grown to be a far different creature, especially around those he does not know, or those he doesn't like.

personality here when I figure out what it is again :D

Loyal to a fault, Talos would do anything to protect those he cares about - quite literally. He is apt to violence against any that threaten his rider specifically, and may otherwise be quick to anger when those threats extend into his inner circle. He is somewhat unpredictable, even around friends - and he may say things or lash out without particularly meaning to.

However, when nothing is pressing and his rider is at ease, Talos may be as gentle and kind as he once was, preferring to sleep in the sun much of his time when there is little to do. He finds joy in simply taking in his surroundings, and the quiet silence of nature.

Talos utilizes pure energy blasts and shields, as well as a bright, white gold flame he can breathe to both purify and burn with. He is unskilled in its use, however, and has much to learn about his abilities before true mastery is achieved.

being reformatted and rewritten

- born to Saudi and Tarii, two Desert Golds in the Exodus Desert - Saudi is bonded to a rider, so leaves before he learns he has fathered eggs - two eggs are duds; Talos hatched alongside a sister, Aera - both grow easily to fledglinghood, in relative peace. then, Tarri hears of War on the horizon, and moves her family south of Sunfire, near the ocean. the First Demon War hits hard, and they are separated when the Nightmare Sickness twists Felnova into the shape of its sister-Realm, Kurai - Talos travels alone for some time; eventually, is picked up by a group of travelers who are heading north. befriends them, and is enthralled with stories of white landscapes and towering mountains - finds it's miserable in Icemark, where the group of travelers disband; it's cold! but he meets Caele, a dark elf, and quickly forms a bond with him. this evolves into becoming the dragon to a new dragonrider, and they travel as the Hell War begins - finding themselves in Icemark once again, Caele learns devastating news and lashes out against the Icemarkians, killing one. they are retaliated against, and Talos submits to an inherent family magic that allows him to physically age several years, until he is able to carry the grief-stricken Caele to safety. - Caele's depression stretches long, but he hears that the one he thought had been killed is alive, and they rush to save her. however, in exchange for her life, both Caele and Talos are made Hunters by Kairn, and must harvest souls for his use - they escape eventually when Caele is presumed killed and returns in his alternate form, a veldryn. Talos finds him after traveling with the one they rescued, Kalorin, for some time - they are reunited, and Caele is allowed to shift back into his true shape. Kalorin leaves, and they turn to fight and finish the Hell War's final culmination - both dragon and rider have some peace; Talos falls in love with a dragoness named Atreya, briefly, in Millirand 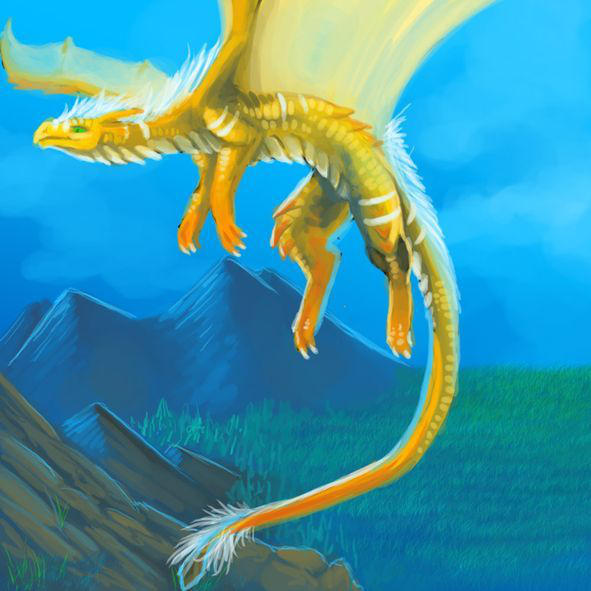 Content and character (c) me; art (c) Vhitany, Xikhara, Leundra, Cudo215, Wintrymist and myself (Verridith)!
Background image (c) Bel. All can be found on dA!