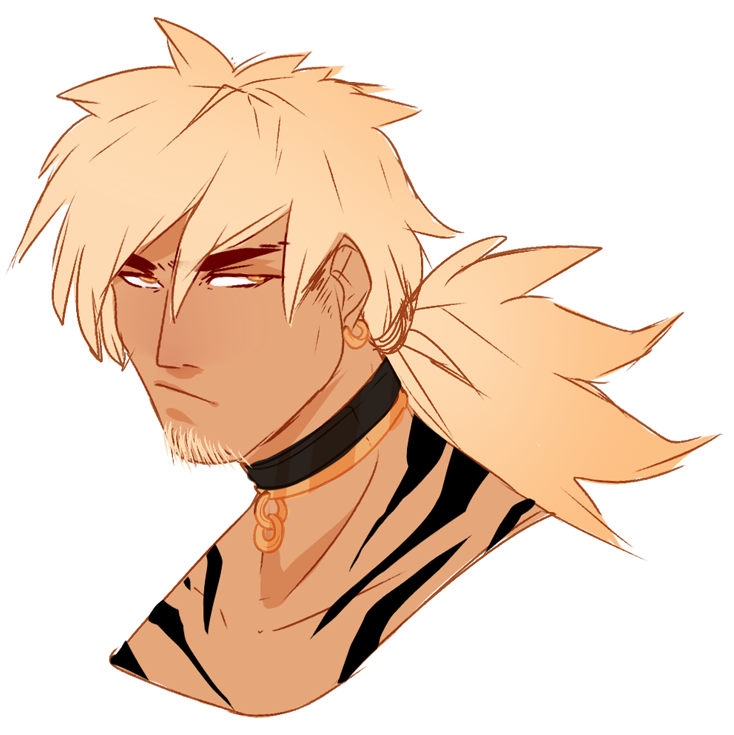 Zahkiel, better known as Zack, is a young sol'tera man of both Khu and Mau lineage. He has skin pale but lightly tanned, with sharp, jagged black stripes that run down his arms, across his shoulders, along his back, thighs, and legs. Three deep scars slash horizontally across the stripes on both shoulders: the brand of a criminal to his kind.

His hair is a pale blond color, just longer than his shoulders, and is usually tied back into a loose ponytail. A light, well-trimmed beard touches his chin and is the same shade. Both eyes are a pale, unsettling gold, and his pupils are unusual for his race - thin and slitted like a cat's, even in dim light.

Anymore, Zack wears very little of the extravagance he once enjoyed; he has a golden collar edged with black cloth and shackles that he wears to remind himself of his slavery, and of his father's betrayal. The only jewelry he wears are earrings of the same shade. Otherwise, the rest of his garb is Arcadian in style, and he goes largely barefoot wherever he travels.

Once, Zahkiel was an easygoing and carefree young man; he kept his troubles largely secret, and didn't often show what he truly felt through much of his adolescence and early adulthood. He was reckless, and often didn't think things through - such as when he stole his father's prized horse to show off for the girl he loved. Labeled as a bit of an adrenaline junkie (perhaps due to his tendency to dive into challenges to bury whatever emotions he's hiding), he was quick to act before thinking.

Now, he is bitter and brooding, but still holds that reckless streak as deeply ingrained in him as his soul. It takes a bit more to get the sol'tera to open back up and feel safe with present company than it once did, but when he does relax, he's much more easygoing than many. However, he only opens up to those he truly trusts, and he has severe trust issues due to past mishaps.

He can be somewhat difficult to get along with until that outer shell is broken. Any mention of his past, even by friends, will see the sol'tera shut down completely. Getting him out of this state is near impossible - and he may often wander off to deal with it himself, often getting himself into trouble by acting before he thinks.

As a sol'tera, Zahkiel's strength and energy are governed by his exposure to the sun or suns of a Realm. Being pale of skin and hair, he needs to spend more time in the sun than a normal sol'tera, but doesn't weaken as much overnight as others of his race might. However, he is also apt to suffer from too much sun exposure as well physically, even if he needs it for regaining his energy; he needs to drink more water to avoid this, and risks dehydration and heat stroke if he doesn't.

Otherwise, Zack is adept at both wind and fire magics. He can combine these into small, focused fire cyclones as long as the weather cooperates, and otherwise uses wind to enhance his fire in a variety of ways. However, weather does have an immense effect on his abilities, and if it's already windy, cold, humid, raining, snowing, or any similar weather occurrence he cannot summon and/or control either element well. In circumstances of extreme heat, his fire may grow out of control and harm him and those around him regardless of his wishes.

For the first few years of his life, Zahkiel was well loved; he knew only his mother's warmth and adoration, and grew swiftly into a bright and bubbly little boy. He loved the world in which he lived, and rarely threw tantrums or got upset enough to cry. However, when his father, Azizim, returned home from the war... everything changed.

Suddenly, Zack's perfect childhood had been thrown into disarray. He grew up under his father's thumb from toddlerhood into adolescence, and it gave the young sol'tera a streak of rebelliousness that made the two butt heads more often than not. His beloved mother, Layla, often was the only thing that kept their fights from becoming physical.

By the time Zahkiel got his sun-enchanted tattoos, he was running with a band of vagabonds and spent little of his time at home. For years he snuck off to hang out with the miscreants and criminals who roamed the desert and stole from unwary wealthy travelers, and established some rank as a horse thief who could pilfer steeds out of noble herds without their owners being any the wiser.

That is, however, until he stole the wrong horse.

Seeking to win the heart of a sol'tera woman named Kiya, and having courted her for some time, he stole the most beautiful stallion he knew of and presented it to her beneath the shimmering light of Ristell's full moons. It was the prized Arcadian stallion owned by none other than his father, Azizim; a tall blood bay steed with a single white star marking, and unusual white-blue eyes. All seemed perfect in the world - and being with his love, nothing seemed as if it could ever go wrong.

However, when he returned home three days later, it was not Layla or Azizim that greeted him. He tried to flee the guards that stood posted around his house but was captured and beaten until he revealed where the horse had been hidden. Dragged away, his last thought was of his mother - and then he lost consciousness, blacking out as the magic-dampening shackles were snapped around his bloodied wrists.

He awoke in the middle of his Branding; the ritual scarring across a sol'tera's tattoos, their number indicating severity. As the heated metal claws of the scarmaster cut deep into his flesh, he screamed and screamed and screamed until unconsciousness once again provided relief from the pain. Days later, when none had come forth to speak for his honor, he was sold as a criminal-slave.

The majority of his adult life has been as a slave in service to Eden, then sold to the Faction of Hope when their emissaries came to seek strong men and women for the warfront. It was here he escaped into the desert, knowing too much of what the Faction planned. For days he wandered, magic still barred from him by the bands and chains around his throat, ankles, and wrists. He very nearly died from heatstroke and lack of water - and will never forget his trial amid the sands.